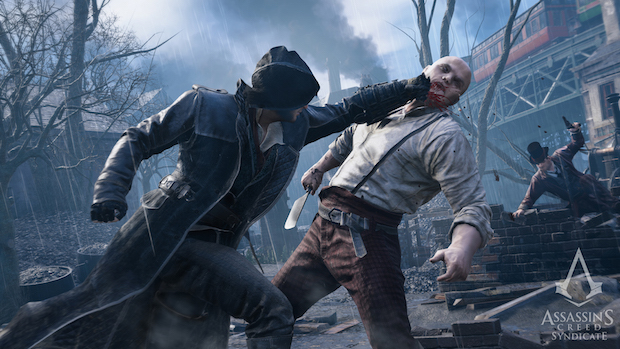 With just a few days until the start of E3, sources within Ubisoft say the company is doing everything possible to make the E3 demo of Assassin’s Creed: Syndicate the ultimate gaming experience — unlike the broken, bug-filled turd of a final product that will be released on the PS4 and Xbox One this fall.

“Right now we’re not worried about whatever it is we’re putting on store shelves in October,” says Robert Hayden, a programmer on the Assassin’s Creed series. “Right now it’s all about E3 and making sure we have a demo and eye-catching trailer that will win us those coveted E3 awards. Does spending time and effort crafting a quality video game lead to bigger sales? Nobody knows; but you know what does lead to big sales? A ‘Best of E3’ award from Kotaku and IGN.”

The road ahead is not an easy one, according to Hayden, as the roughly 13-minute demo is facing a breadth of game-breaking issues.

“We have a lot of work to do and not much time to do it,” Hayden explains. “Some of the problems the demo is still facing include buildings disappearing as you try to climb them, massive frame rate issues, poorly synced sound effects and characters escaping from Assassin’s Creed into better video games. We found a few characters hiding out in Toy Soldiers: War Chest, a few more were pretending to be dancers in Just Dance 2016; but most of them run to this old, dusty copy of Beyond Good & Evil 2 that we have. We find them and they beg us to let them stay but we’re like ‘Come on guys, you know this game is never coming out.’”

With its press conference scheduled for Monday, Ubisoft is running out of time to put the final touches on a game demo that could generate articles with headlines like ‘Assassin’s Creed is Back’ or ‘Ubisoft Has Learned From Its Mistakes.’ Hayden says everyone at Ubisoft is also hoping for a wide selection of sentences with a favorable spin on the demo that it can cherry-pick and repurpose as positive reviews in advertisements for the final game.

“We’re going to get there. Right now there are about 600 people working around the clock to make this demo something that will fool people into thinking this time will be different. But we’re not stopping there. To ensure the nothing goes wrong, we’ve also started doing sacrifices to the blood God Shezmu. I mean we’re sacrificing anything we think will help. Goats, pigs, cats, birds, turtles, dogs, Hank from accounting, Hank’s grieving widow, Hank’s two recently orphaned children… I tell you the blood altar hasn’t seen this much action since we prayed for everyone to forget about that massive data breach we had two years ago.”