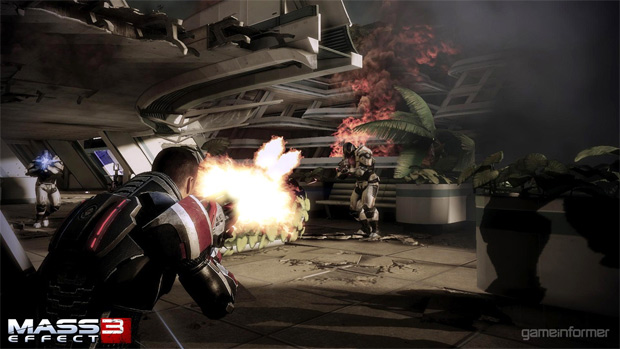 Game Informer has two new screenshots for Mass Effect 3. The screens show Cerberus forces opposing Shephard on the Salarian homeworld, which we all know as Sur’Kesh. Given that planets in Mass Effect and Mass Effect 2 were either homeworlds (like Tuchanka) or economic hubs (Omega, Illium), perhaps Mass Effect 3 will feature all of the other races’ homeworlds? I’ll take one Elcor homeworld please.

The Salarian settlement or city depicted in the screenshots seems to be under attack, so it’s anyone’s guess why Cerberus would be there in the first place and why they are actively opposing Shephard’s quest to rid the galaxy of the Reapers. Or how they got past the Salarian Special Task Groups.

Let’s hope the Illusive Man hasn’t done one of those “We have to join <evil force> or be destroyed, and they promised to give me <high ranking position of power devoid of meaning in a dead world>” things.

Check out the higher res screens over at the Game Informer website.