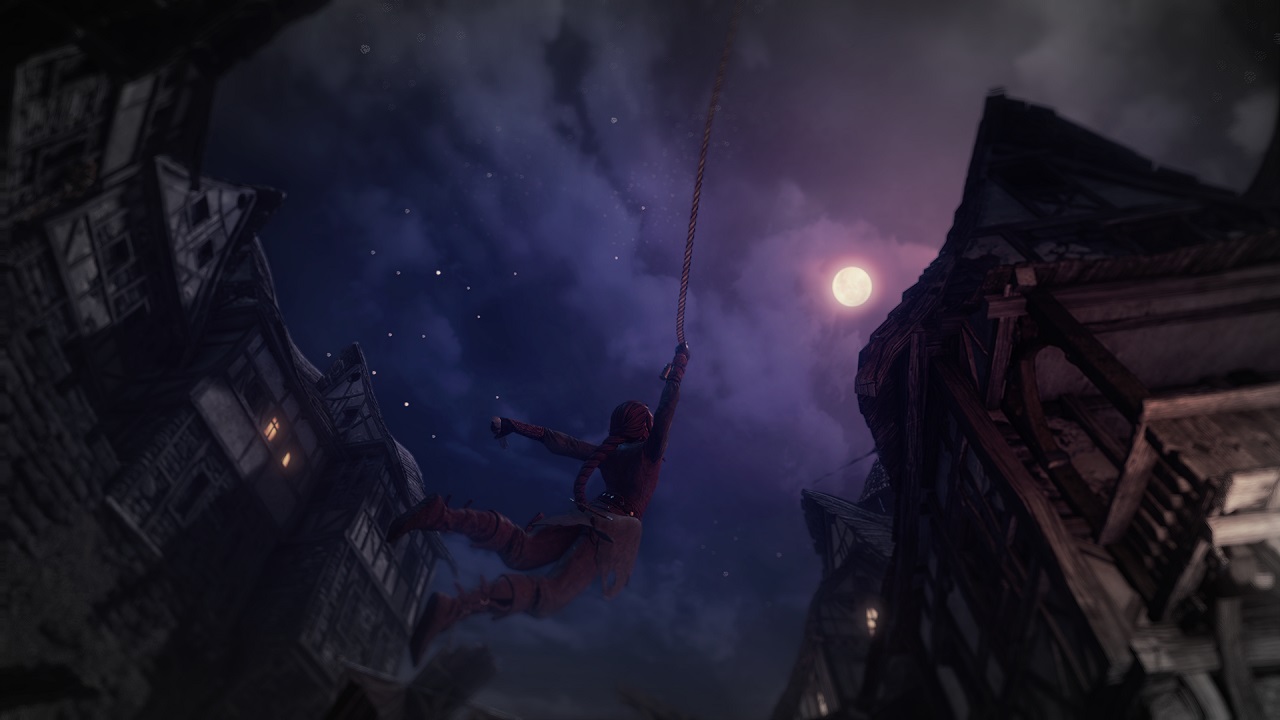 Shadwen is a stealth game that is actually a stealth game. There’s no other option. It doesn’t subscribe to the Assassin’s Creed-style mindset of “Now you’ve made a mess of things, time to clean it up.” If the player is seen even once, it triggers a fail state.

That sounds frustratingly rigid in its unrelenting ways, but it’s really not. That’s because Shadwen‘s main hooks revolve around time manipulation. Whenever the titular player character Shadwen isn’t moving, time freezes. It allows ample opportunity to take in the surroundings and strategically conceive the next set of moves. Plus, it’s never tiring to stop her in mid-air and pan the camera around to marvel at her frozen jump animation.

In the event of that aforesaid failure, Shadwen allows for the liberal rewinding of time. Up to several minutes into the past, in fact. Now you know what doesn’t work. Try a different approach — maybe make use of the game’s many traps, or stick to the rooftops, or just find another route. Shadwen always gives the player options, that much is certain.

The purpose for all of this is that Shadwen is on a one-night quest to assassinate the king. Early on, she comes across an orphaned girl named Lily who accompanies her. The short-term goal is to pathfind in such a way that clears a route for Lily and so that she doesn’t see you commit any murders or discover any bodies.

Having spent a half hour with Shadwen, I picked up on vibes of Dishonored in the creative stealth and Assassin’s Creed in the third-person movements. But, it’s not enough to feel derivative, as there’s something unique about Shadwen. The time mechanic goes a long way, but it may be more in the child companion; I really didn’t want to let her see anything bad go down.

Shadwen will launch on PC and PS4 in May. The PC version is releasing at the strangely specific price of $14.55. Developer Frozenbyte notes that the PS4 version might be priced differently depending on store policies and whatnot. That probably means it’ll be bumped up to $15. Seems a fair price to see if this take on stealth is a meaningful one.