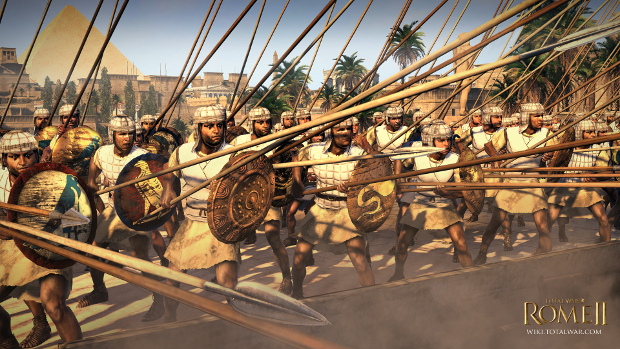 They also have scythed war-chariots, so mind your legs

The Romans are pretty groovy, but they were a bit boring in comparison to many of their neighbors. Now the Hellenic nations, they knew how to party. The latest Total War: Rome II nation getting shown off is Ptolemaic Egypt, a superpower born from Alexander the Great’s short-lived conquest of much of the known world.

Egypt, during this period, was a strange blend of traditional Egyptian customs and traditions with newer Greek ones. In Total War it gives this faction a balanced army made up of typical Hellenic units like deadly spearmen, with more exotic units like North African war-elephants.

Despite Egypt’s power, it’s built on shaky foundations, and some Egyptians still resent their Greek masters. Players controlling this faction may have to deal with heated internal conflicts as they try to reunite the disparate Hellenic world.

You can learn more about Ptolemaic Egypt over at the Total War wiki.