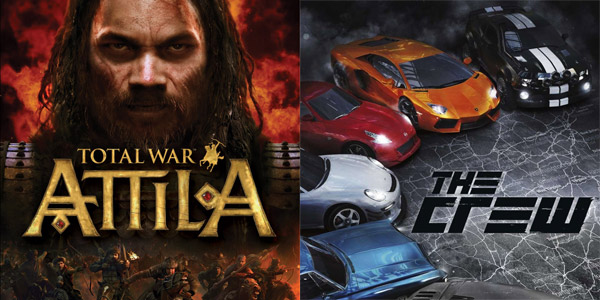 Deals brought to you by the crew at Dealzon. FYI: sales from certain retailers go toward supporting Destructoid.

One got a release date confirmed, and the other is finally on schedule to be released after being delayed. Creative Assembly’s Total War: Attila heads to the PC on February 17, 2015 while Ivory Tower’s The Crew shows up on most platforms on December 2, 2014.

Bonus DLC packs are the standard draw these days for pre-ordering games, and these two titles are no exception (details below). But the added bonus for PC gamers is cold-hard cash discounts.

Today GMG launched a new 25% off coupon slashing $11.24 off the new Total War. The same coupon also works on The Crew, along with its “Gold Edition.”

Note: The code is set to expire on Monday, January 26th at 11am Eastern. The same coupon will also work on most games at GMG.

Along with the release day announcement, Creative Assembly launched a new trailer for the “Viking Forefathers Culture Pack,” the included DLC freebie if you pre-order Total War: Attila. As is customary with Total War DLC, this pack unlocks three factions, all of which were historically known to raid Britain and northern Gaul:

Like all other DLC releases for Total War: Rome II, the “Viking Forefathers Culture Pack” will cost $7.99 on Steam Store if purchased separately. The new DLC will be available on Day One (yay?) of Total War: Attila‘s launch. You can watch the trailer here.

The Crew: Limited vs. Gold Edition

The “Limited Edition” of Ubisoft’s The Crew merely refers to the base game plus its pre-order bonuses. The bonuses include early unlocks for the BMW Z4 sDrive35is, MINI Cooper S, and Dodge Ram SRT-10 vehicles.

Furthermore, Limited Edition buyers get a bonus 10,000 Crew credits – sort of a in-game currency that’s helpful for customization. While we haven’t looked at the in-game currency deeply, we doubt the 10,000 credit will make any meaningful impact after a day or two of game time.

The “Gold Edition” comes with all the “Limited Edition” pre-order bonuses PLUS the Season Pass of the game. If you’re dead set on The Crew and know you’ll want the extra content in the Season Pass on Day One, this is a respectable way to go with the 25% discount.

The Season Pass is $24.99 on Uplay Shop right now and gets you some in-game extras on the December 2nd launch, along with extra content down the road:

This is the first time we’ve seen a significant discount on The Crew, and to be honest, we won’t be surprised if GMG pulls the coupon from this title in North America without warning. It’ll be interesting to see how the game fares next week following America-spends-money day.