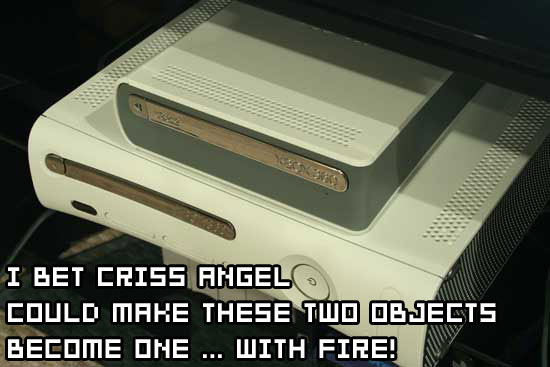 If Microsoft truly have any plans to include an HD-DVD drive with their Xbox 360, Toshiba ain’t talking. In fact, they’re outright denying it.

Rumors circulated last week that Microsoft would finally man up and include the HD-DVD drive in (yet another) revision of the console. Right before they made him pose with Victoria Beckham in lingerie, an unnamed Toshiba exec told Stuff that’s not in the cards.

“It’s got nothing to do with us,” the mystery exec said. “But we know Microsoft doesn’t want to include the HD-DVD so as not to limit the user’s experience.”

Wait, what? “Limit the users experience” how, exactly? By giving them more functionality? Whatever the fuzzy logic may be, Xbox 360 owners itching to watch Transformers: The Movie in high definition can pick up the drive seperately whenever they damned well feel like it. Hey, I hear there are some good deals going on right now.