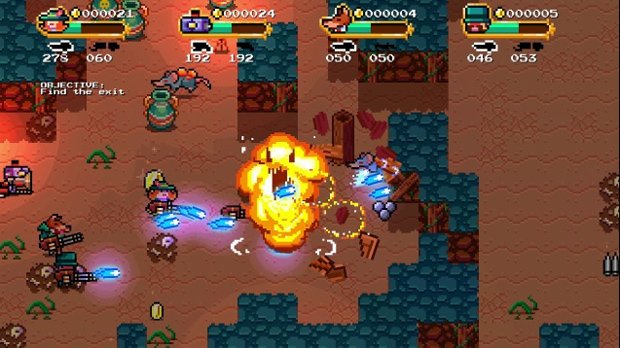 I only needed to watch a fraction of this trailer for Monsters & Monocles before I committed to covering it — that good! This is a top-down shooter designed with four players in mind and there’s online multiplayer, not just local, which is nice to be able to say.

The action looks like simple arcade fun and developer Retro Dreamer is unsurprisingly using procedural generation for levels, bosses, objectives, puzzles, and more to help keep the setting fresh. I also like the sound of the game’s approach to world interaction:

“Want to open a door? You have to find a keygun. Reviving a downed player? Shoot the grim reaper hovering over them in the face until he goes away. Heating up a giant tea kettle so the whole team can get healed? Everyone shoots it until it boils and sweet tea flies everywhere.”

Monsters & Monocles is looking for votes on Steam Greenlight, though it sounds like it’ll be through the system soon. Bonus: here’s a neat post about how rooms are generated.