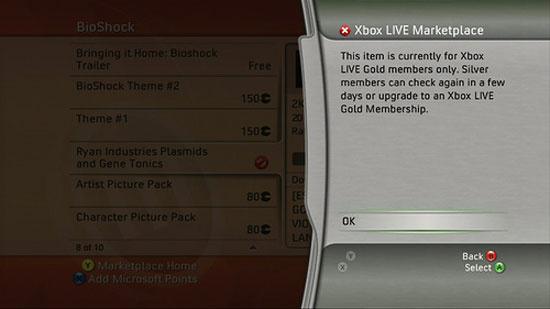 Having fun with that free Xbox Live Silver account? Sure, you can’t play games with your buddies online, but you sure can compare high scores! And yeah, every now and then content will appear that’s only initially available for Gold members, but that doesn’t happen that often. What’s that, Major Nelson? It’s going to happen all of the time now? Crap.

Along with the new dashboard update, Silver members received a downgrade — free content (like all of that great marketing, like demos, for instance) will be available exclusively to Gold members for one week. According to Major Nelson, “This is not done to annoy our Silver members — limited time exclusive access to content is just one of the many benefits of having a Gold Xbox Live account.”

Oh really? So being able to play games online wasn’t a benefit enough? I’m not sure if Microsoft realizes it, but their competitor has been offering free online service (and much of the same content) since day one. When it came to the online space this generation, MS had it on lock with Xbox Live, but this move further widens the gap between it and Sony’s service, and seems like a silly, greedy move.

Would someone other than Microsoft care to defend this?