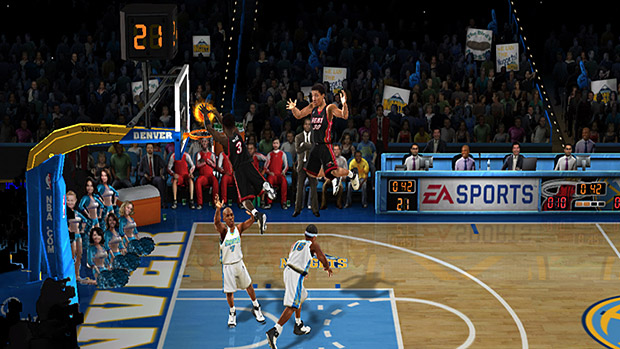 If you played NBA Jam back in the day, you have fond memories of the game’s announcer, Tim Kitzrow. Spouting unforgettable lines like “he’s on fire!” and “boomshakalaka,” Kitzrow was a major factor in the game’s brilliance, and I figured that it would only be logical to bring him back. Well, EA Sports has officially announced that Kitzrow will be in the NBA Jam revival that’s launching on the Wii this fall, and he might be repeating a phrase that you came up with.

EA Sports is holding a contest for NBA Jam one-liners. Do you remember any of the catchphrases you thought of when you played the original NBA Jam? Then head over to facebook.com/NBAJAM and submit them between now and 9 AM PDT on Wednesday, May 19th. On May 25th, fan voting on the top 64 entries will commence, and the four phrases with the highest tallies of votes will be immortalized in the game! Here are the guidelines for your submissions:

Entrants’ submitted Entries must incorporate only the entrant’s own originally created catchphrase (“Original Creations”). Entries must […] be associated with [one] of the following actions in the Game: dunks, assists, alley oops, blocks, 3 pt shots, 2 pt field goal, “on fire” shots, steals, shot clock violations, rebounds, missed shots. Catchphrases should avoid reference to specific NBA players. […] Contest must not contain any pornography, or other illicit content, and must be appropriate for audiences at least 13 years of age.

To enter, you have to be at least 13, and you have to be a resident of any part of North America outside of Quebec. I guess Montreal’s citizens don’t care too much, since they’re probably busy celebrating the Canadiens’ victory over the Pittsburgh Penguins in the Eastern Conference Semifinals. Get moving, folks! If EA receives the same one-liner more than once, they’ll count the first entrant as the author — so don’t put your lines in the comments below before you actually submit them. For more details, check out the video above, in which Kitzrow himself explains the contest.