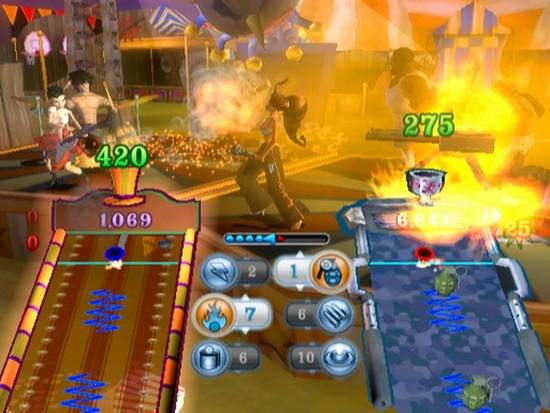 It was only a few days ago that my wife and I were watching television when we saw a video for a mashup of The Door’s “Riders on the Storm” and Blondie’s “Rapture.” We were shocked — not only were we not aware that they actually made music videos for mashups, but it was absolutely awful.

Here’s to hoping that THQ’s Band Mashups for the Wii will fare a bit better when it hits shelves this April. From the three screenshots, it’s a bit difficult to tell just how the game is going to play, and THQ’s description of the game in today’s press release isn’t helping.

Band Mashups will feature 150 tracks and five musical styles: rock, funk/hip-hop, country, marching band, and Latin. Apparently, the game features “combat” between customizable bands. THQ’s global brand direction Randy Shoemaker is just as vague about how all of this plays out.

“Using a rhythm based game-play mechanic,” he says, “the game delivers 70 over-the-top musical weapons and utilizes the Wii Remote’s functionality to deliver a comletely original musical combat experience. Fighting with a sniper violin or flamethrower gitar is something gamers should definitely look forward to.”

Well, it certainly sounds promising, but … how in the hell do we play this game again? We’re still not sure, but hit the jump for the press release, which details the game’s single-player campaign: a quest to take down the nasty old big boss, Mr. Hong.

“Band Mashups takes an innovative approach to the rhythm/action genre by blending music and combat in the ultimate battle of the bands,” said Randy Shoemaker, global brand director, THQ. “Using a rhythm based game-play mechanic, the game delivers 70 over-the-top musical weapons and utilizes the Wii Remote’s functionality to deliver a completely original musical combat experience. Fighting with a sniper violin or flamethrower guitar is something gamers should definitely look forward to.”

Band Mashups is the first time a musical “mashup” game has been delivered on Wii, allowing players to battle it out with their preferred musical style. Band Mashups features both an exciting two player versus mode and an extensive single-player campaign where players take on the role of one of eleven bands trying to topple the nefarious big boss Mr. Hong and take control of the faraway city of New Cadenza. Band Mashups introduces the innovative concept of “music switching,” putting the player winning the battle in control of the style of music both players hear. When an opponent turns the tide of battle, the music changes as well, switching between different music styles. Band Mashups features 30 classic and modern chart-topping hits from over the last four decades, all of which have been recorded in five different styles – (rock, funk/hip-hop, country, Latin and marching band) – for the game, resulting in a total of 150 unique, playable recordings.