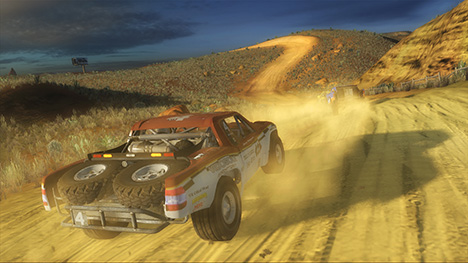 The Baja 1000 is one of the most grueling races ever conceived by man: a day-long off-road trek through the Baja California peninsula in Mexico. The race takes either the form of a point-to-point sojourn (from Ensenada, Baja California, to La Paz, Baja California Sur) or a loop race that starts and ends in Ensenada. Competitors drive a wide variety of vehicles, including motorcycles, Volkswagen Beetles (known as “Baja Bugs”), and trucks.

If you didn’t get enough sand in your HDTV with MotorStorm — i.e., if your name isn’t wardrox — THQ is hoping you’ll be interested in a racing videogame that brings the desert genre and its flagship contest, the Baja 1000, into your living room. They’re publishing Baja: Edge of Control; you might remember it from Nick’s announcement a few months back. Baja is being developed for the PS3 and 360 by 2XL Games; some of the studio’s current employees worked on the old MX vs. ATV games.

I had a chance to sit down with Baja earlier this month, so if you’re wondering how the game is shaping up, follow me to the jump for my impressions.

Baja brings over 40 fully upgradable vehicles spread across eight classes, and they can be put to the test on a whopping 95 tracks. 2XL Games are boasting that their game world covers more than 100 square miles. And each of the vehicles offers over 200 different parts to mess around with, so those of you who became customizing junkies in Gran Turismo and Forza will feel right at home. Unfortunately, THQ wasn’t showing off that part of the game at the event I attended, so I can’t give any details on the system.

There are plenty of ways to tackle Baja. You’ve got your usual rally and circuit events — settings for these include the number of laps, the AI difficulty (from 70% to 120% of full strength), and damage (off, “cosmetic,” or full). Then there’s a pretty cool mode called the hill climb: a field of ten competitors fights its way up a mountain and then speeds down it. It sounds simple, but strategy is key — on the way up, you’ll be jumping off of ramps and the track will be cluttered with the other racers, so one wrong-angle leap could send you hurtling to your doom. The way down is, of course, filled with switchbacks, so you can’t just floor it. In addition, finishing in first isn’t your only concern; you’ll get penalized for damage.

But the game’s main attraction is a simulation of the Baja 1000. The first official Baja 1000 race took place in 1967, and it has been held in the fall every year since then (except in 1974, when the international fuel crisis forced a cancellation). There are plenty of other desert races throughout the year, taking place in such dry locations as Arizona and Nevada, but the Baja 1000 is the big daddy of them all. You’ll begin in a Baja Bug and work your way up to $1 million trophy trucks. Hundreds of racers compete in the real-life contest; however, Edge of Control is limited to showing 12 of your opponents on-screen at once.

Still, you’ll get most of the Baja 1000 experience. Last year’s winner finished the race in just over 24 hours, but to make things manageable, 2XL Games have shortened the in-game event to a still-lengthy four hours or so. To accommodate the vicissitudes of life, they’ve also implemented a wonderfully thoughtful AI driving system. So if you happen to get interrupted on mile 632, for example, you’re not relegated to pausing the game. You can just turn on the autopilot and have the CPU drive while you run your errand — but be warned: the computer won’t guarantee you a place in the winners’ circle.

The THQ PR rep who showed me the ropes explained that the developers had a mantra when putting together the game’s world: “drive to the horizon.” In essence, if you can see something, you can drive to it. Graphics-wise, Baja features real-time terrain deformation and a realistic physics engine — vehicles bounce on their suspensions and crashes are solid — but in general, the build I played lacked the overall polish of a game like MotorStorm (yes, I know I’ve mentioned it already, but the comparison is an apt and valid one). The vehicle models themselves weren’t as detailed as I expected, thanks to games like Burnout Paradise. Don’t fret, though; there’s a while to go before the game’s late-summer release.

However, while what’s on the tracks won’t blow you away, the game’s gorgeous vistas are much more likely to do so. Hardy desert foliage — mostly cacti and shrubs — looks great amidst the parched sandy backdrop, and the sun-drenched landscape is a sight to behold. In addition, the game sounded great, even out of the tinny speakers of the small HDTV I was playing on; engine roars and the sounds of the desert will surely envelop you in the proceedings with the aid of a full surround sound system.

Lastly, my ears perked up when the game’s multiplayer offerings were listed. Baja will allow for four-player split-screen play, online and offline, and online races will support up to ten players. Many people complained that MotorStorm lacked split-screen online play, so 2XL Games wanted to deliver on that front. However, THQ wasn’t demoing the game’s multiplayer portion, either, so we’ll have to wait and see how it turns out.

All in all, I was relatively impressed by Baja. It certainly needs a bit of fine-tuning, but the core gameplay is fast and fun, just like any racing game should be — and the engine does a great job of balancing simulation-style gameplay with arcade sensibilities to make the game enjoyable above all else. Baja: Edge of Control is currently set for release on September 8th. For more information, hit up the game’s official Web site at https://www.bajagame.com, and the gallery below.