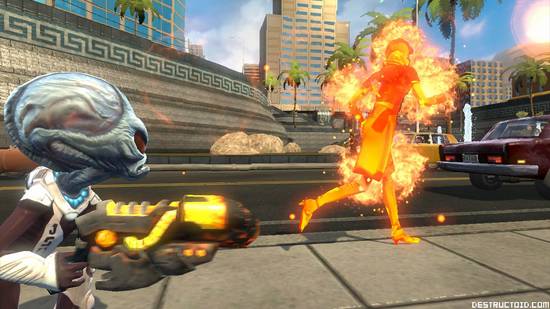 THQ’s snarky, irritable alien invader Crypto is finally hitting the Xbox 360 and PlayStation 3 this fall in Destroy All Humans! Path of the Furon. I had my first chance to catch a sneak peek at the game last week at THQ’s Gamer’s day, and it’s shaping up to look like, well, other Destroy All Humans! titles.

The game is set in the 1970s, following the events of the recent Wii-only Destroy All Humans! game, Big Willy Unleashed. Our shriveled little alien hero is now running a casino in the game’s parody of the real world’s Las Vegas, Las Paradiso. A bit down and out, Crypto finds that he’s lost what’s most important in his life — his passion for destroying all humans.

As a result, he begins to hear a voice in his head, calling him to the game’s fictional Hong Kong, a place called Shen Long. He meets the Furon version of Kung-Fu’s Master Po, who places Crypto on the path to Furon enlightenment. It’s this training that is the foundation for many of the game’s new abilities, and ultimately the tools that help Crypto unravel and come face-to-face with those behind a twisted Furon conspiracy.

THQ and the game’s developer, Sandblast (Evil Dead: Regeneration) were allowing hands-on time with an early version of the game’s Hollywood spoof level, Sunnywood. This same area will eventually be coming home as a consumer demo later this year, but in the meantime, hit the jump for details and impressions of the game’s new weapons and abilities. 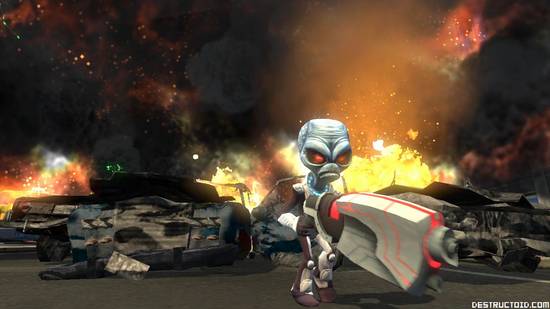 Looking at Path of the Furon from afar, it’s likely you’ll think the same thing I did – “Yup, definitely Destroy All Humans!” That is to say fans of the previous games should be shivering with anticipation, as the game looks set to deliver more of the same human terrorizing hijinx they’re familiar with. Visually, the game maintains the same artistic style from the previous games with its bright colors and clean lines; it’s almost as if the art from the cult classic “Mars Attacks” trading cards has been brought to life.

Surprisingly, the game is powered by a modified version of Epic’s Unreal Engine 3.0, something I never would have guessed if I hadn’t been told. Path of the Furon doesn’t necessarily look bad — both Crypto and the environments are more detailed and crisper than before — but it certainly doesn’t appear to have the same “pop” or level of “realism” that we’ve seen in other Unreal 3.0 titles. Perhaps it’s the game’s cleaner, more vivid style that threw me off; I didn’t see one tough-as-nails space marine during the entire demo. The game still has some time before its release, so it’s entirely possibly an extra coat of paint will get tossed on to give it that true next-gen “wow” factor. But as it stands right now, you’d be hard pressed to refer to it as anything but Destroy All Humans! in high-definition.

But for fans of the series, that should be enough, and Sandblast are bringing back many of the game elements they’ve come to expect. Voice actor J. Gran Albrect will be returning to reprise his role as Crypto, and Richard Horvitz as Pox; both will once again hopefully be able to complement the series’ trademark wit, which will lampoon all things 70s. (Note: Isn’t that just disco and porno?) You’ll still be able to zap humans with the electrical “Zap-O-Matic,” turn them to dust with the “Disintegrator Ray,” or pop a brain stem with the ever-popular “Anal-Probe.” The city blasting saucer also returns, with some slight upgrades to old weapons, like the “Abducto Beam” which can now suck up multiple humans for instant DNA processing. Familiar psychokinetic abilities (now all mapped to the left trigger) are also included, like mind-reading, body-snatching, and the ability to move objects through psychokinesis. 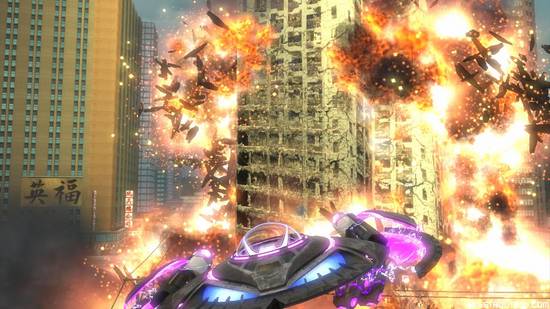 There will be plenty of new weapons and abilities, too, among my favorite the ability to stop time with Crypto’s “Temporal Fist” power. On its own, bringing the space-time continuum to its knees isn’t all that exciting; we’ve seen it in varying forms in games from Ubisoft’s Prince of Persia titles to the recent first-person shooter, TimeShift. But in Path of the Furon abilities can be combined, which puts an interesting spin on Crypto’s time-halting skill. Once time is stopped you can then use your psychokenesis to re-arrange objects in the environment. For example, it’s possible to lift and place a vehicle (or two) above an unsuspecting human while everything is frozen in time. Once restarted, the vehicle will come crashing down, and Furons everywhere will laugh with delight.

Some new weapons have been provided to Crypto as well, like the Venus Human Trap, a Little Shop of Horrors-inspired flytrap-like monster that can be spawned at will. The Venus Human Trap will act on its own, growing bigger as it grabs and eats various objects and humans. Crypto can also feed his new pet humans using psychokenesis, and I was able to skewer multiple enemies (read: humans) on its tentacles before it decided to snack on all of them at once. Also amusing was Crypto’s new “Black Hole Gun,” which sucks in everything and anything that’s not nailed down, including humans. Of course. 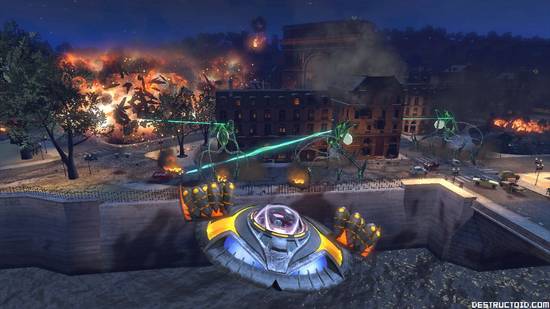 Path of the Furon will have five open world locations to explore — Las Paradiso, Shen Long, Sunnywood, Belleville (Paris), and Crypto’s home planet. The Sunnywood area I was able to explore seemed a bit small in the demo, but the level of destruction seemed to be amped up considerably from previous games. Buildings taken down by the saucer’s laser crumbled differently depending on where they were attacked, and humans would pour out onto the streets in fear. While touches like these are only subtle, they unquestionably gave me a feeling of power, and really helped me get amped to destroy more (and eventually, all) humans.

The title will also feature a host of multiplayer options, including the versus mode “Goliath” (crypto versus saucer), and cooperative modes like Brain-O-Matic and Abduct-O-Rama. Clearly not the game’s focus, the modes seem designed to add some quick value to the single-player product.

Destroy All Humans! Path of the Furon is scheduled to ship this September.