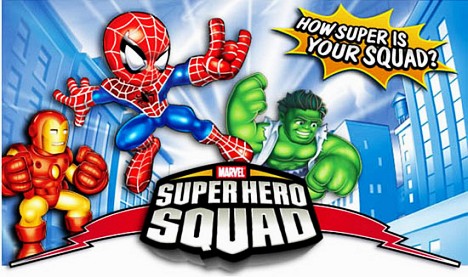 THQ and Marvel Entertainment have announced this morning that they’ve entered a multi-year agreement to create a videogame based on the kid-friendly Hasbro toy line, Super Hero Squad. Titles based on the franchise are being designed for current- and next-gen consoles, as well as handhelds and Windows PC in 2009.

The Super Hero Squad toy line was introduced by Hasbro in 2007, and features super-deformed versions of popular Marvel heroes and villains. According to Wikipedia, the series has seen 2″ figures based on Spider-Man, Hulk, The Punisher, Wolverine, and more. This should give plenty of material to THQ to work with, and indeed provide plenty of marketing opportunities — tie-ins with a cartoon, children’s costumes, and Mega Bloks construction toys are all planned.

My first thought on this was that THQ could really have something special if they walk a thin line between pandering to a younger audience and playing on the comic book obsessions of some adults. LEGO Star Wars is a perfect example of a game that seems to be very clearly designed with children in mind, yet has a universal appeal. Because really, I’d be totally down with controlling a smiley version of The Incredible Hulk.