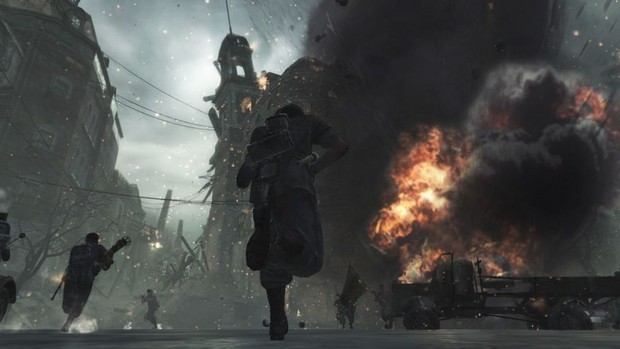 Always being one late to the party, I recently started a playthrough of Call of Duty: World at War. To be completely honest, I don’t like it very much. Though Treyarch certainly does better than their last attempt, I just can’t go back to the slower pacing of a World War 2 game after the bliss that is Modern Warfare. That being said, I recently experienced one of the toughest, most morally ambiguous decisions I’ve ever faced in a video game while playing it.

The level is Eviction. You are playing as Russian Private Dimitri Petrenko, and the first 30 seconds set the stage for the rest of the level. You enter a room where the rest of your squad has captured a German soldier who is begging for his life. After a moment of bickering between two of the Russian soldiers over whether the German could be more useful dead or alive, one simply raises his rifle and shoots the German POW in the head. After seeing this, one of your squad mates disgustedly mutters, “This isn’t war, this is murder.”

Though during the majority of the level the Germans are definitely fighting back, you get the feeling that it is more of a slaughter on your part than it is firefights. Probably the most surprising thing that happened during the stage was a completely unscripted interaction, since I tried multiple times to recreate the scenario, all unsuccessfully.

About half way through the level, I was ahead of the rest of my squad when I turned the corner and saw a German lying on his back, propped up on his elbows. At first I immediately raised my gun at him and almost pulled the trigger, but I saw him offering no initial signs of resistance. Seeing as I am not a heartless bastard like my fellow soldiers, I wait to see how the scene would play out. The wounded German just looked up at me, with a scared look on his face. I barely saw him move his arm to his belt, and before I could process what he was doing, the grenade that he had just pulled the pin out of blew up and killed the both of us.

So what does that say about my decision? Obviously I made the wrong decision, as it directly resulted in my death, but does that mean that I should gun down every wounded and to my assumption, helpless enemy I come across? Seems awfully vicious to me.

The finale of the level is the sum of everything that has happened so far. You get through all of the buildings, and when you reach the outside, you are presented with a field of injured Germans, all trying to surrender. You are ordered by your superiors to kill all the survivors. I did not. We had already won, these guys were already on their deathbeds, I was not going to be the one responsible for putting the final nail in their coffins, so to speak. But as with most things in life, a decision not to do something is a decision in and of itself, which was manifested as my squad mates burned the remaining Germans alive with molotov cocktails. My refusal to give them a quick death resulted in the unspeakable horror of them being burned alive.

My biggest question throughout this ordeal was, why am I actually feeling compassion for these bastards? This is a videogame, for Christ’s sake. And I had absolutely no problem killing little girls in BioShock, or running down pedestrians in GTA:IV like I’m Ted Kennedy. The problem is that in the aforementioned games, your moral actions are so far removed from reality that it’s not really a moral decision, it’s an option in a videogame. Obviously none of us are going to go look around for five-year-olds so we can tear a slug out of their bodies, so it’s not something we hesitate about when we’re playing a game. None of us (except Necros) are going to run around New York City beating random people, it’s not something we would even consider, so when we are presented the option in Grand Theft Auto we say “Sure, why not.”

But in World War 2, that shit happened. Soldiers back then had to make those decisions about other human being’s lives, and they were not easy decisions. And when I am presented those decisions in such a realistic manner, I go from the guy who blew up Megaton for shits and giggles to the guy who dies from a suicidal German soldier because he can’t bring himself to kill an injured combatant.