Preteens, comic books and a man dressed in tights.

No, I’m not talking about your uncle’s sex dungeon; I’m describing the scene at Austin Books & Comics this past Sunday, where a release party was held for the Wii release of Thor: God of Thunder. Austin’s Red Fly Studio (the game’s developers) mingled with fans, gave away copies of Thor (which was released this week!) and showed off their latest title to a crowd of rowdy, lil’ cosplayers.

In between the costume contest and comic geek conversations, I grabbed the notable Wii developer aside to discuss the challenges of making original franchise-tied, Wii games, their upcoming Thor release for the 3DS and what it has in-store for the Xbox 360 and Playstation 3. 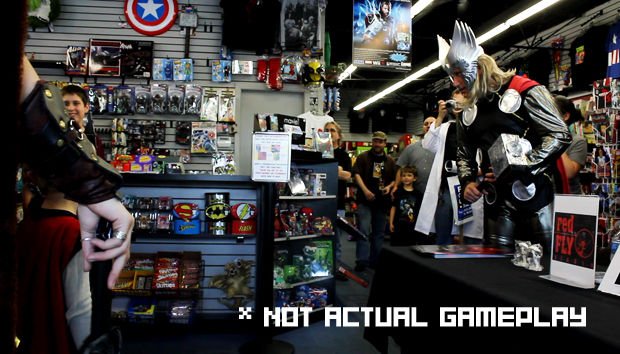 Since forming in 2008, Red Fly Studio has made a name for themselves through developing critically successful Wii titles. What’s most puzzling about the third-party Wii developer is that every game except their first (Mushroom Men: The Spore Wars) is tied to a franchise. By shunning the notion of making Wii ports and developing their games from the ground up, the studio has become a confident, independent developer. Their previous title, Stars Wars: The Force Unleashed II, received a Metacritic score higher than its high-def counterparts.â€¨

“People have been trained to expect a Wii version of a movie title to be a straight port that probably wasn’t treated with a great deal of love and care, frankly,” creative director Craig Bolin said. “And that’s simply not how we operate. If we need to divorce ourselves from the next-gen platforms in order to make a better game, then we sure as hell are going to do that.”

However, the studio is currently making their own next-gen game from the ground up. Red Fly revealed that it is working on a game for the PS3 and Xbox 360 — the studio isn’t ready to give details at this time, but I suspect it’s going to be another franchise game. 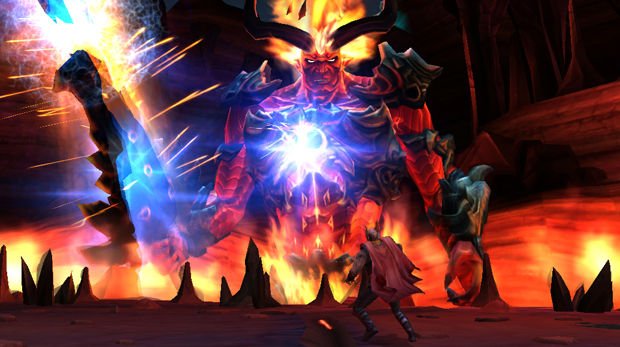 Although Red Fly isn’t in the business of porting others’ games, it is currently working on a 3DS port of their own Wii version of Thor: God of Thunder.  Other than some graphical adjustments, 3D support, and tweaked flight combat scenes that recall Starfox, it will pretty much be the same game.¨

“Some things that look good on the Wii may not look so good on a smaller screen,” level designer Philip King said. “So we adapting that to make sure it feels good, plays good and looks good, so you can clearly see Thor on the screen at all times.”

Over the past four years, Red Fly has been making Wii games on the Infernal Engine (developed by Terminal Reality). By modding the engine and creating a cartoon visual style for their games, the studio has been able to push the limits of the Wii. The scale of Thor: God of Thunder’s bosses and the high frame rate are impressive for the platform. 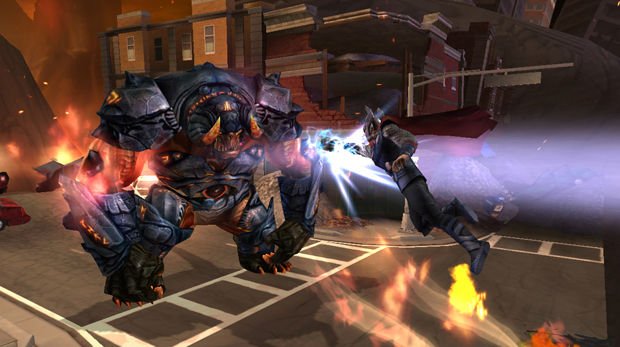 “We’re not really concerned with what Sega’s working on,” programmer Eric Tubi said. “I think it’s important that we keep an eye on it but at the same time our focus is on how well Red Fly can do with our own tech.”

But that tech is getting old and the studio is looking toward an HD future, which could provide a challenge for the relatively small studio of 40 or so employees — most of whom are veterans who worked on Deus Ex, Darksiders and other Austin-developed games.¨

“[At Red Fly], everybody wears a lot of different hats. So, folks do a lot of different jobs and jump back and forth [between them],” Bolin said. “It keeps people interested and makes everyone feel like they have some sense of ownership on a project.”

The next generation title will run on new tech, which has led to discussions on what engine to use. Producer Chad Baron said the transition is going smoothly due to staff members having next-gen experience from working with other developers before joining Red Fly. 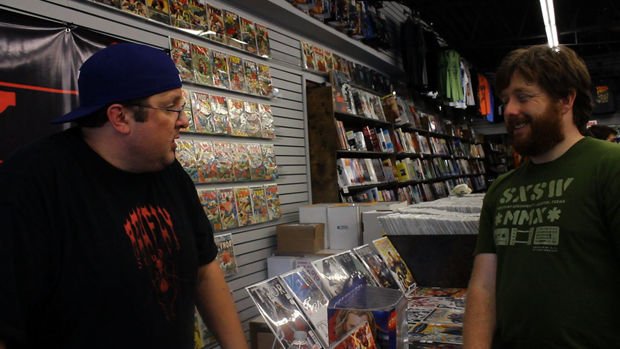 “We do it project by project. If we didn’t first come out with something that was noticeable, we wouldn’t have gotten a second publishing deal,” Baron said. “When Gamecock [Red Fly’s previous publisher] was going under, we were getting so much positive feedback from Mushroom Men, which ramped up to our next project, Thor.”

However, the movie studio pushed back the film’s release by ten months, which led to a similar delay for the game.

In many ways, Thor is the end of an era for Red Fly. It was the studio’s first big license, before acquiring Star Wars and Ghostbusters, and now it will be their last Wii game before taking the jump into the high-def world.

“We are going on five years strong now and which is pretty long for an independent studio,” Baron said. “We have to say we are pretty happy.”