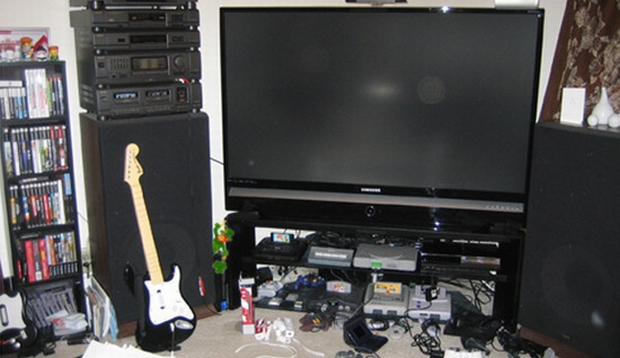 This week’s setup belongs to mrberns. He somehow got a 56 inch 1080p TV for free, a bunch of consoles and a copy of Ratchet & Clank Future signed by the entire team at Insomniac. Check out the rest of mrberns’s setup over on his blog.

Anthony Burch hates you, Knives uploaded the entire PAX 09 panel, everyone is still Double Downing, Japanator has C Blogs and more stuff happened over the last two weeks in the Community.

Paul Soth wrote up a few blogs recapping his adventures while at Seasons Beatings IV. Bonus: He got Daigo Umehara to autograph Shaq-Fu.

kittwalker showed us his videogame themed Halloween costumes from over the years.

If you are not on this list, then Anthony Burch fucking hates you.

Destructoid: We give a shit.

Knives uploaded the entire Destructoid panel from PAX 09. It’s split up in three parts and full of Destructoid goodness.

Here are the winners from the DestructoidArtisans SCUMM contest!

SuitcoatAvenger shows off some more of his art. Here’s a collection of random art. And then here’s some more!

Funktastic has a portale that magically transport all of the stuff he collects into a black hole just so he can keep everything he gets. Here’s two months worth of swag Funk has collected as of late.

“Rage Quit”, a song about Street Fighter by Kauza and walkyourpath.

DtoidNewYork is getting together for Blipfest next month. Hit up the group if you want to join in on the fun.

DanlHaas submitted his whale with a ninja sword design over on Teextile. Go vote for it!

Halidar found a goldmine of a retro videogame store.

Anthony Burch is an asshole.

P-Dude made a video with some friends and the opening references HAWP in a funny way.

atheistium is up in Canada doing some Ubisoft stuff right now. Look at her redness!

Todd Umbarger shares his Left 4 Dead artwork with us.

Topher Cantler lays down the law.

People miss RetroforceGO! Bring it back!