They’re the best… around…

[Update: Telltale is mistakenly credited for the LEGO games in the source report, but it should be Traveller’s Tales.]

In the company’s FY13 presentation, it listed the 20 top franchises from 2005 through 2012, accumulating worldwide sales on PS3, Xbox 360, Wii, and PC — handhelds were ignored. These were further separated by pre-existing IPs and new IPs for the seventh hardware generation.

Topping the list of course is Call of Duty, followed by Mario and FIFA. Of the new IPs, Wii Fit clocks in at #4, Assassin’s Creed at #5, Guitar Hero at #6, Just Dance at #12, Rock Band at #13, and the LEGO series (mistakenly attributed to Telltale, not Traveller’s Tales) at #15. The most curious entry is Mario Kart Wii at #14, a standalone title that should have been bunched in with the Mario brand, but it’s high performance nonetheless demonstrates the strength of Nintendo’s exclusives. 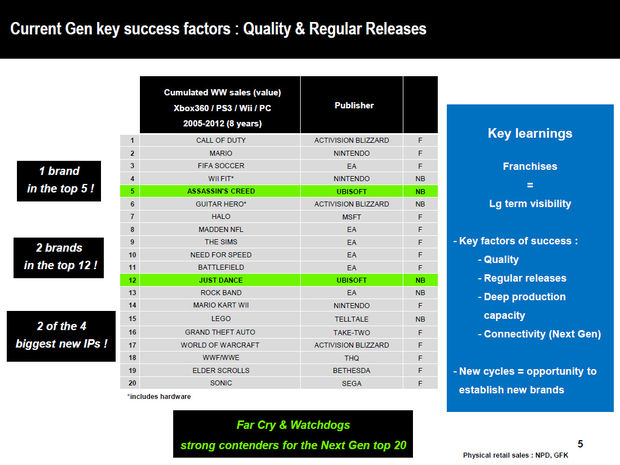 EA manages to dominate the list with six entries total, while Microsoft, Traveller’s Tales, Take-Two, THQ, Bethesda, and SEGA all have one each. Surprisingly, no Sony-published titles broke the top 20, a sign that the media giant’s first-party brands are likely not as strong as it would have hoped.

By studying this list, publishers should have an understanding of what existing properties would work best in the upcoming generation and what areas they could try to fill with new ones. I recognize that only Nintendo’s portable software would sell through enough units to make this list, so it’s for the best that handhelds weren’t considered. Still, by disregarding handhelds on not only this list but also in the rest of its FY14 plans, Ubisoft seems to have made up its mind to steer clear of the portable space.