We live in an age where you can easily download the entire NES library, fire up an emulator, and spend five minutes with one game before getting bored. The internet never forgets, which is fortunate since there should be nothing ephemeral about a video game’s availability. If I wanted to go back and play something stupid and obscure like Classic Concentration, then I should be able to and you shouldn’t be able to stop me.

While I know there are less-than-legal options that would allow me to do this, I’ve always preferred to go about things on the up-and-up. I’ve got walls of cartridges rather than a couple ROM folders, and sure, I’ll pay to have Leisure Suit Larry in my library. It’s comforting to know that my money will go to continued-ish support for the game. Best case scenario will be someone takes the time to convert it to widescreen and give it native Windows support, but maybe the effort isn’t worth it for something no one remembers, like Blake Stone. But, I mean, at least you can still buy Blake Stone! And you should!

The following is a list of games that have not received a re-release. Even GOG, the bastion for old games of yore, doesn’t feature these titles. They’re not completely unobtainable for someone determined enough, but they really should be available for everyone. 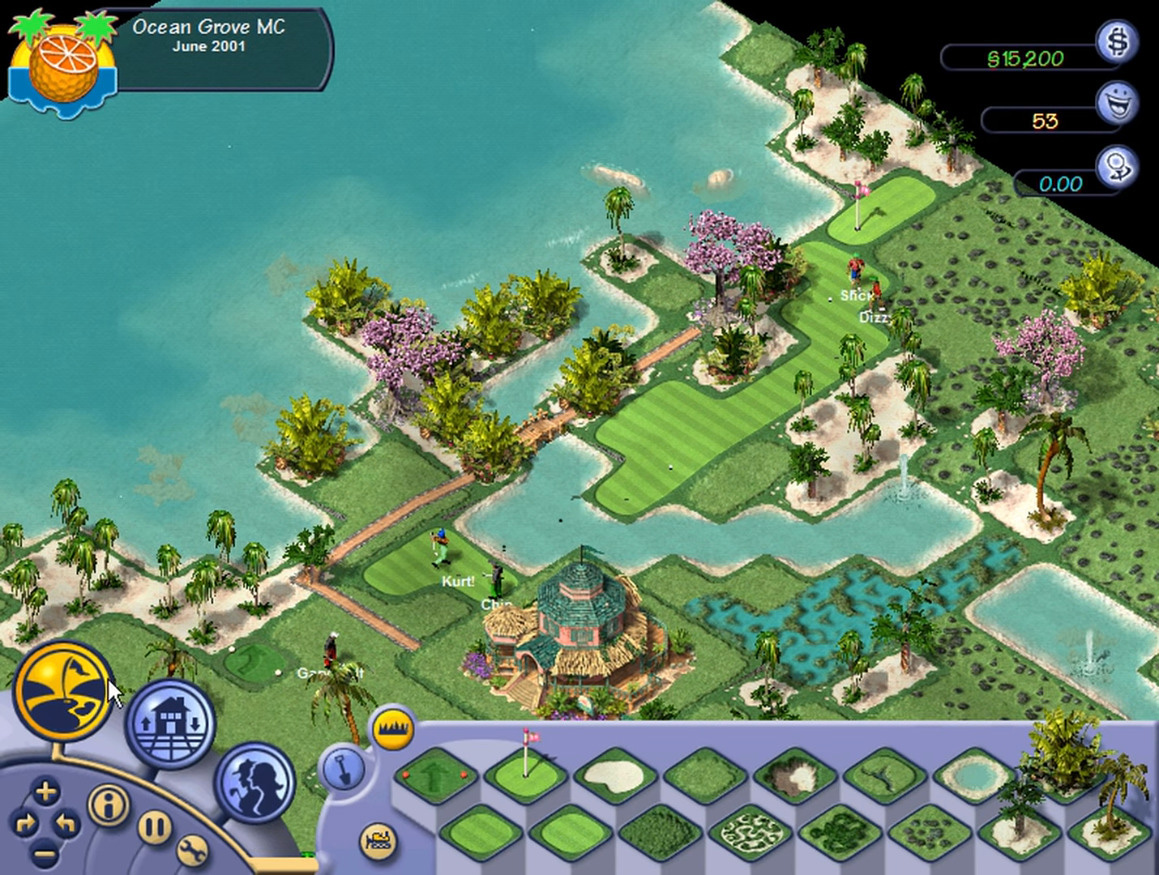 A wise soul once described golf as “a good walk spoiled.” Personally, I prefer spoiling my walks with mini-golf or golf when it’s played by Luigi and associates, so it’s a little shocking to me that Sid Meier’s SimGolf had such an impact on me. It’s a game that has you designing your own golf course and then hosting and participating in tournaments. I played the hell out of it on a demo disk, then somehow wound up with a copy in adulthood.

It’s a bit hard to describe the appeal of SimGolf. It’s your typical tycoon business game released at the height of the tycoon genre. You start from nothing and build up the fame of both your course and your golfer. But you can’t just place water hazards everywhere in an attempt to drive every customer completely off their tee. You have to actually consider what makes a good course and provide something that people want to come back to. Also, you need to strategically place snack shacks so golfers can rest on their spoiled walk.

You could also import your sim from The Sims for a completely pointless addition. Speaking of The Sims, that’s another game that is no longer available for purchase. Considering what a landmark title it was, the fact that it’s not carried on Origin, at the very least, is tremendously unfortunate. 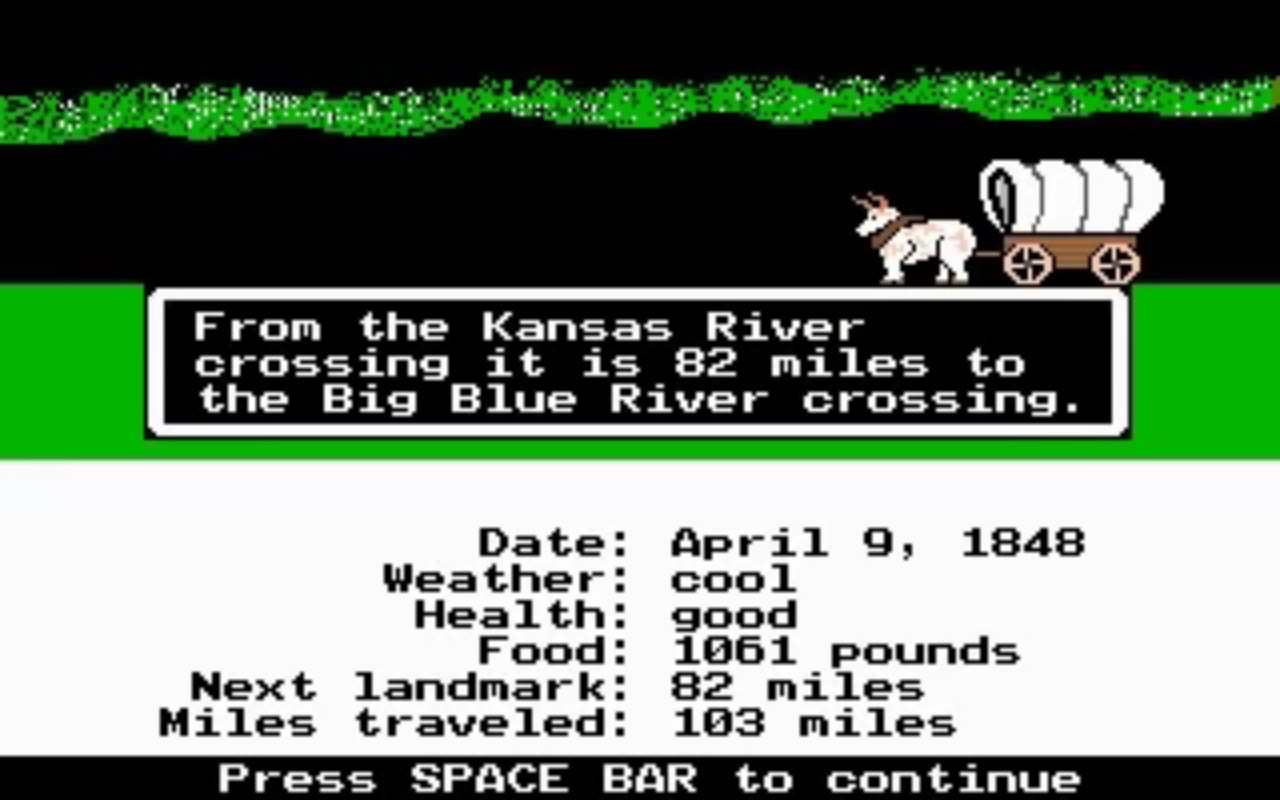 There are a few edutainment games that have risen to be influential, but perhaps none as memorable as The Oregon Trail. Based on the pioneer journey of the 19th century, The Oregon Trail has you attempting to get a group of people across the United States from Missouri to Oregon. Along the way, you have to keep everyone fed and make decisions that could affect the fate of the people in your care.

The game was interesting because it depicted the perils of crossing the country. Your pioneers could come down with a disease at any time, or part of your wagon could crumble. You often had to choose between making up for lost time and playing it safe. Even the best attempts could end with a few of the group being reduced to grave markers along the trail.

The Oregon Trail is in a bit of a weird place right now. We’ve recently received a board game, a card game, and even a miniaturized handheld version of it, but for some reason, you can’t just drop onto a storefront and pick it up. If you really need to die of dysentery, there are various games inspired by it, perhaps most notably the zombie-filled Organ Trail, that help fill the Oregon-sized hole in your heart. 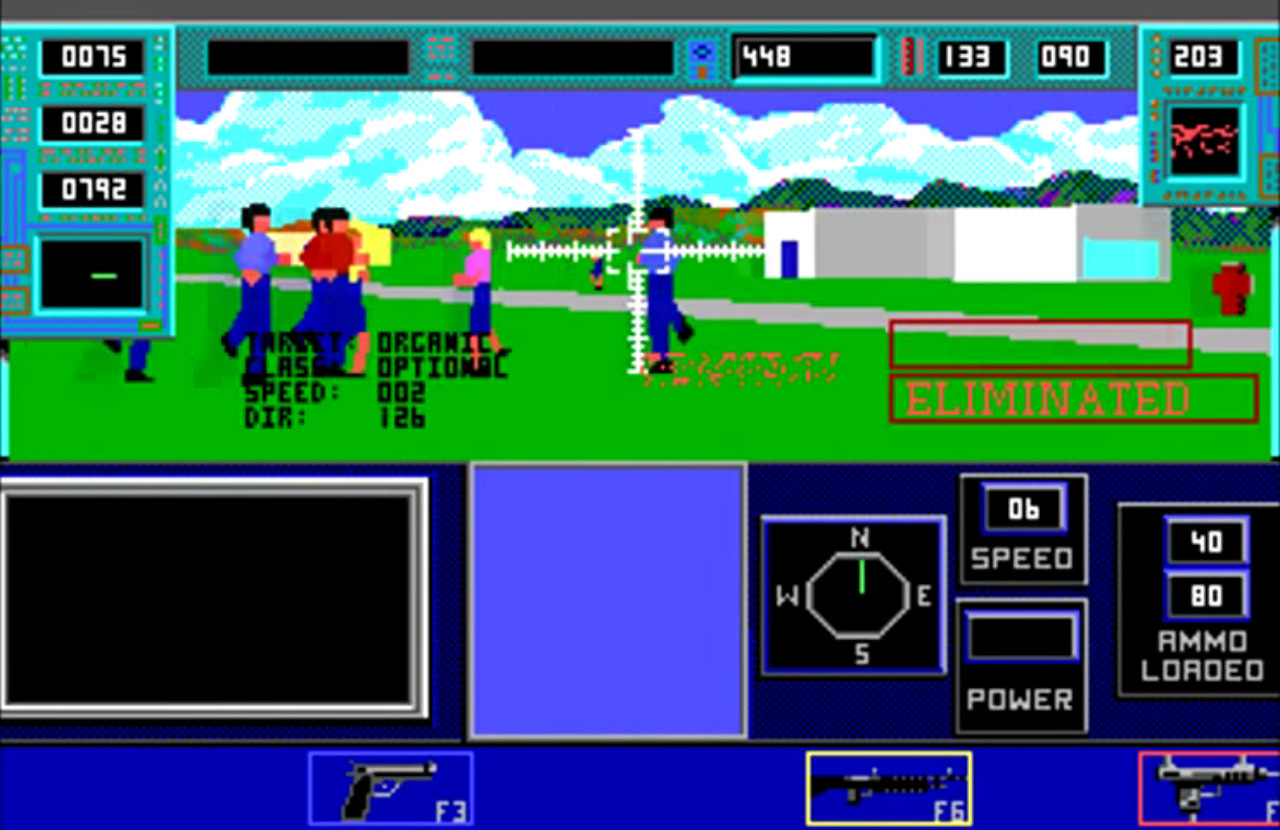 This may be a bit confusing because The Terminator saw a lot of titles pop up across a wide variety of platforms. The DOS version was something special, however. Developed by Bethesda Softworks and programmed entirely in assembly, it was the rare case of a 3D game on home computers in 1991. Not only that, it featured a huge open-world representation of Los Angeles, replicating roughly 60 square miles of the city.

Interestingly, it adopts a freeform approach to the movie’s plot. You can choose to play as The Terminator or Kyle Reese and either protect or hunt Sarah Connor across the map. Along the way, you have to visit various shops to equip yourself and keep your body in peak condition. There’s a lot you can do and a lot to learn. To be honest, The Terminator is somewhat impenetrable due to its ancient interface and dizzying depth. It’s pretty hostile to new players, so the audience for it is a bit niche.

Even when you get past the steep learning curve, the gameplay is nothing too spectacular. Still, it’s an amazing technical feat and deserves to be played today. The fact that it’s tied to a license makes things rather complicated in terms of re-release, but to have it languish in obscurity is criminal. 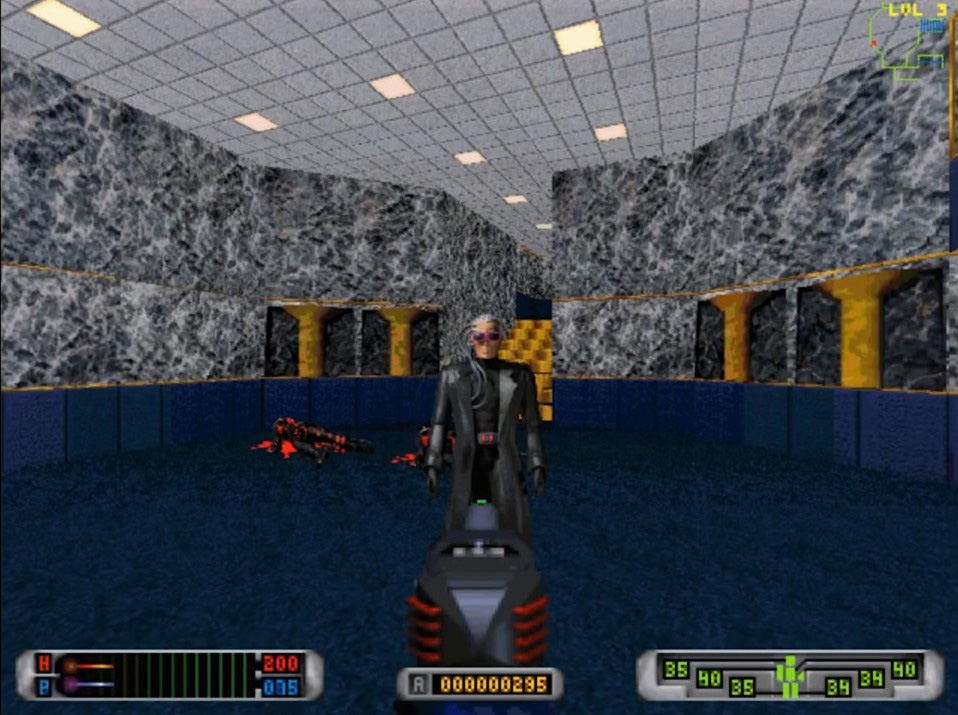 Including a cyberpunk aesthetic and a magic system mixed with conventional weapons, Cybermage was a bit ahead of its time. It had more verticality than Doom, and it also ditched the key-hunting level design that was prevalent at the time. Perhaps surprisingly, there’s a smattering of storytelling through fully voiced NPC dialogue which was pretty rare in FPSs. It does kind of carry an early-’90s indie-comic edginess complete with women in nothing but a thong and nipple pasties, but isn’t that what a cyberpunk future is all about?

It’s certainly no Duke Nukem 3D, but in a world where I can buy a modernized port of Strife, I feel like this should be available. The fact that it has been all but forgotten despite being developed by the venerable Origin Systems is an unfortunate fate, even if it wasn’t as influential as Ultima or Wing Commander. 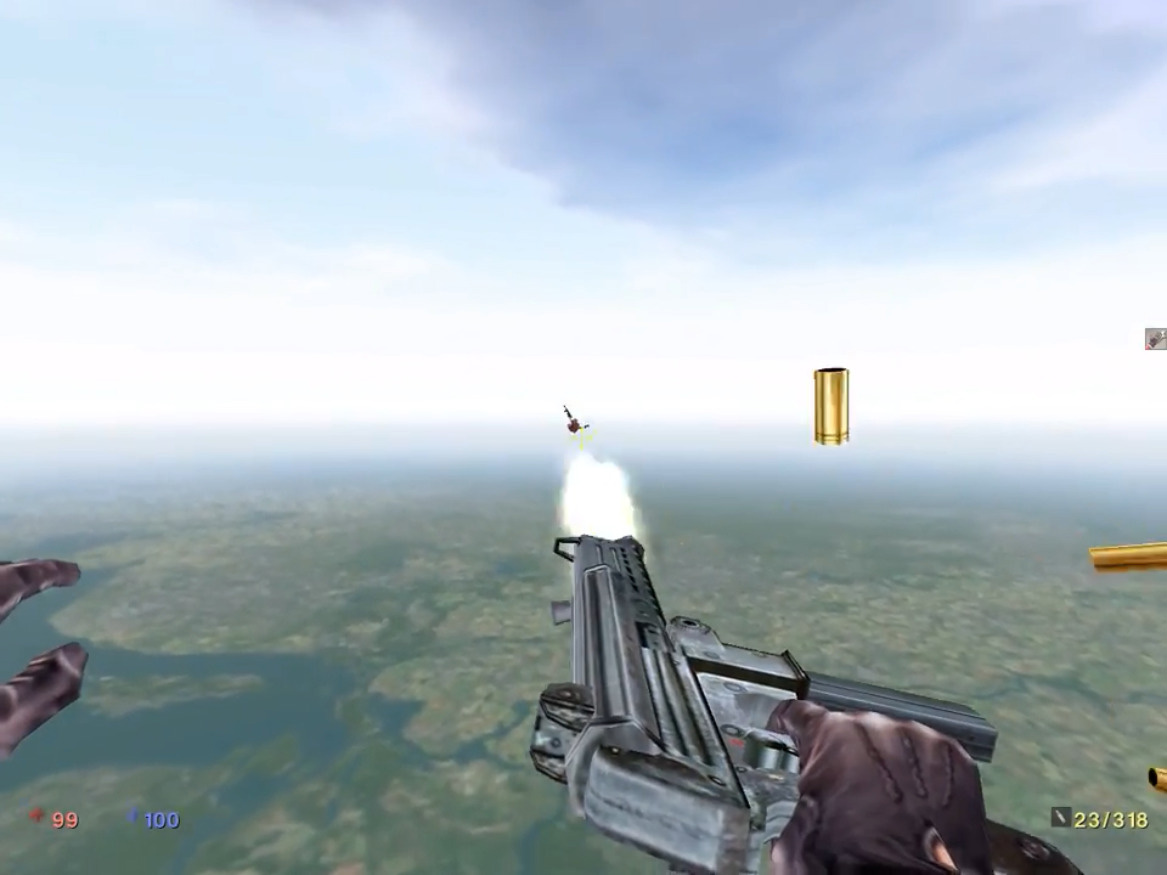 No One Lives Forever (Monolith Productions, 2000)

While the last two shooters may be somewhat obscure, No One Lives Forever carries with it a cult following that is completely unable to purchase it for their modern computer. An espionage FPS set in the 1960s with a humorous twist, the game follows super spy Kate Archer as she travels the globe trying to thwart the evil machinations of H.A.R.M.

No One Lives Forever puts emphasis on stealth, though it’s rarely completely necessary. It also throws in a great deal of setpiece moments to break up all the sneaking, like having you fall out of a plane or putting you in the driver’s seat of a snowmobile. It was constantly being inventive as far as a 2000 shooter could. I got kind of tired of hiding from security cameras and guards, but going full-auto was always an option if you stepped on a twig.

It also received critical acclaim, including several Game of the Year awards. So why can’t you buy it now? That’s a good question. Simply put, no one is really certain of who owns the rights. Nightdive Studio attempted to acquire all the necessary licenses back in 2014 and eventually had to give up on a re-release after it couldn’t unravel the legal nightmare. It doesn’t look good for a re-release, but stranger things have happened.

If there isn’t a way to buy these games, how can you get them? Seek out physical copies and run them in an emulated environment? I feel tired just typing that out. For now, the lazy among us will just have to hope for a better future where digital archiving isn’t left completely up to the brave.