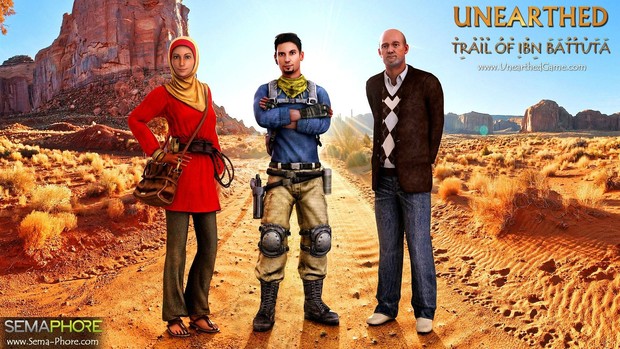 [Dtoid community blogger Handy has scoured the world over and uncovered just how lucky we are to have the games and consoles we do. Want to see your own words appear on the front page? Go write something! –Mr Andy Dixon]

While searching the PlayStation Network recently, my eyes were met with an odd sight: a new Uncharted! Have they re-released them digitally? Is this the free-to-play multiplayer I heard about?

No. This is not Uncharted. This is Unearthed.

I instinctively dismissed it as some puzzle game trying to cash in on the success of Sony’s flagship series, but oh no, it goes much deeper than that. Unearthed is the first game to come from Saudi Arabia, and darn it if they didn’t set the bar high for themselves. Not content to rip-off Mario or Sonic, these guys have gone for the full AAA experience on their first attempt, and the results are… well….

After playing the demo for the optimistically titled Episode One, I definitely won’t be giving it the official Handy Seal of Approval. It looks like a PS2 game. It plays like a PS1 game. The controls are jerky, characters slide around the environment, a fall taller than the protagonist will kill you, enemies repeat the same three lines of dialogue over and over — and in the intro we’re told that our hero “always enjoyed raiding tombs and uncharting mysteries in videogames.” But hey, at least they wear their heart on their sleeve.

Admirably, it does attempt some things Uncharted never tried. Did Uncharted have a driving section? Does Uncharted slide into a 2D perspective randomly for clunky fights with health bars? Did Nathan Drake ever solve an ancient puzzle with a little remote control car, which I’m guessing the Egyptians anticipated and worked into their plans when building their structures? The Middle Eastern protagonist is an interesting change of pace… or at least he would have been if he wasn’t voiced by Jonny California.

But I’m being facetious. Imitation is the sincerest form of flattery, and for a first attempt from a country with zero games industry or infrastructure, it’s not half bad.

Pretty sure “uncharting” isn’t a word though. What is that, like, erasing a map?

Less flattering are the more underhanded attempts to invite comparison. While Unearthed is flagrant about its imitation, other games may try to worm their way into your brain through more insidious methods. For example, have you noticed how Rockstar Games have been using a sort of painted style for their box art for the last few years? That’s all well and good; it’s created a strong visual identity for the brand, and since all the games have been received fairly well, both by critics and consumers, it’s reinforced the style as a stamp of quality.

One of these things is not like the others.

Occasionally other publishers take note of this and adapt the style to their own box art, usually so that casual consumers would make the association subconsciously, or at the very least, maybe trick some kids. It’s like the generic brand cola drinks; they’re not pretending to be Coke or taste like Coke, but they’ll still use a red label to get you to buy their product.

But for real box art oddities, one must look to piracy. Syrian piracy to be exact. Videogame piracy is, or was as the case may be, rampant in Syria, but for reasons beyond my fathom they insist on creating their own box art. And then they thought, “No, that’s not confusing enough” and decided to use art assets from other games, which makes the whole process of figuring out what game is actually inside the case as confusing as it is hilarious. I mean, just look at this stuff…

Am I getting Max Payne 3? Max Payne 2: The Fall of Max Payne? Or Resonance of Fate? Am I getting Persona 4 or Peace Walker? Am I getting THUG 2 or… well, yeah, probably. That is the face people made when they played it.

Other times the face of a celebrity may be used, you know, because it was too easy to tell what you were getting already.

Okay, I can understand using Sarah Michelle Gellar’s head (assuming that’s not Resident Evil 5), but seriously, why is Eddie Guerrero the Battlefield soldier!? And would it kill you to at least rip assets from a Bond movie?

But none of this compares to the kingpin of third-world videogame piracy: Grand Theft Auto. It sold so well that regular GTA just wasn’t enough, so they began selling GTA mods as though they were their own separate games, which lead to creating box art for completely out of place features.

But at least you have some idea what you’re getting with piracy. This all pales in comparison to the masters of knock-offery, China. Not content to simply imitate another product or even sell it as their own, China has to trick you into buying something you think is something else. They’ll make the cheapest piece of crap possible and put all effort into making it look like modern consoles:

The X-Game, now compatible with Kinoct. If you have a TV connection and an active imagination.

I can only imagine the bag costs more than the hardware.

Possibly still a better prospect than the Xbone.

And of course, the Mini PolyZation 3, which is supposed to be a portable system.

I’m pretty sure about half of these don’t even plug into a TV. The cartridge (oh yes, they take cartridges) has the screen on it, which plays out the most rudimentary sort of game: the sort that you’d have found in a Happy Meal a decade ago. And this is without getting into the whole Wee, Wi, Vii, WiWi, MiWi knockoff consoles which are a whole other can of worms in their own right.

You know, this whole experience has made me realize just how good we have it. Now I’m not going to tell you you’re all spoiled or should feel bad because some people have it worse off than you, but you have to appreciate just how lucky we are. There are mind-blowing things we can do in games right now, and on the cusp of the eighth generation, the sky is the limit.

I’m as guilty as anyone of focusing on the negatives in the industry, but when you step back and see how far we’ve come, and how far is still left to go, it’s flat-out staggering.

Anyway, the really important thing to take away from all this is that Unearthed: Trail of Ibn Battuta has a zombie horde mode.