WB has access to some killer IP, and naturally, some sort of crossover was in order at some point. And why not use the same “multiverse” concept everyone else is! Meet MultiVersus: a full realization of that IP smorgasbord.

In a reveal video, one of the game’s developers states that “MutliVersus emphasizes team play,” and “removes some of the pain points” of the genre. Co-op is going to be a focus, with “unique abilities” designed around it, as well as an emphasis on “fighter combos.” It will be free-to-play, with the core mode framed as a 2v2 brawl and “first to four knockouts.”

This is all highlighted in the video below, showcasing moves like Bugs Bunny’s tunnel, which can be used by your teammate: or a lasso of truth swipe saving a team member from falling off the edge. “The game was built from the ground-up for co-op,” the developer notes, but solo play is possible. 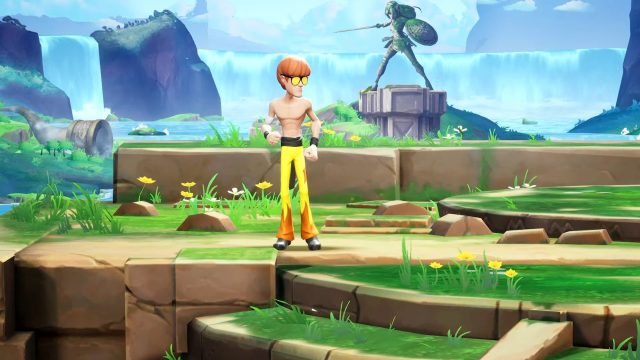 The best part? Unlike the Nickelodeon brawler, it will feature voiced characters, including actual voice talent. Kevin Conroy as Batman is confirmed, as are several others like John DiMaggio as Jake (Adventure Time). The iconography is really interesting too. If you look at Batcave level, there’s a picture of The Joker on the Batcomputer that is in line with the aesthetic of the various animated series.

All that leaked info? Yeah, it lines up with the character select menu and everything. Shaggy, Steven Universe, Adventure Time, DC Comics, Bugs Bunny, Tom & Jerry (combined into a Duck Hunt character): “the gang is all here.” Hell, even Arya Stark is a character in this. There also seems to be a “daily missions” and XP system, which of course is timed and tied to FOMO (a perk system is also briefly shown, which could go wrong in so many ways). Modes, skins (like the wild Shaggy skin above), and events will be added “throughout the year.”

Note that WB has confirmed the following platforms, with a 2022 release on the horizon: PC, PS4, PS5, Xbox One, and Xbox Series X/S. There is no Switch confirmation at this time. Cross-play and cross-progression are in though, as are guilds, leaderboards, and other social features, as well as dedicated servers “from day one.”

A lot of this sounds great! The free-to-play XP system? Not so much! Fingers crossed.