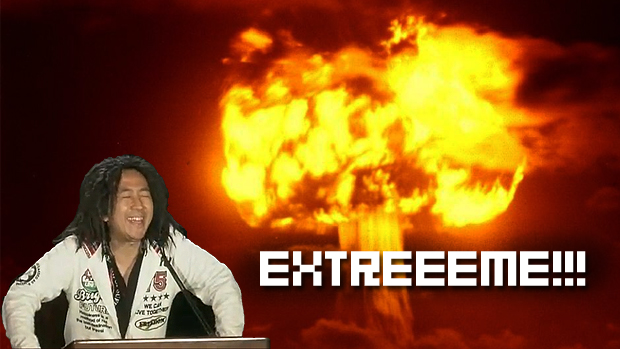 The worst is always the best at E3.

Cutting edge technology becomes dated. Memorable demos are quickly forgotten. An impressive trailer means nothing when the game attached comes out and bombs.

But CEOs talking about “hot chicks” and “RIIIIIDGE RACER!” live on forever.

We love to see E3 disasters – the more ridiculous, the better. Press conference embarrassments and PR nightmares conjure a much-needed laugh among a week of endless caffeine, alcohol, and writing. As long as no one gets hurt, it’s all in good fun.

These infamous E3 mistakes have been seen and ridiculed by many. They remind us why we love this gigantic and gigantically silly conference: for every great press conference reveal, there is always a memorable and unintentional screw-up to follow. 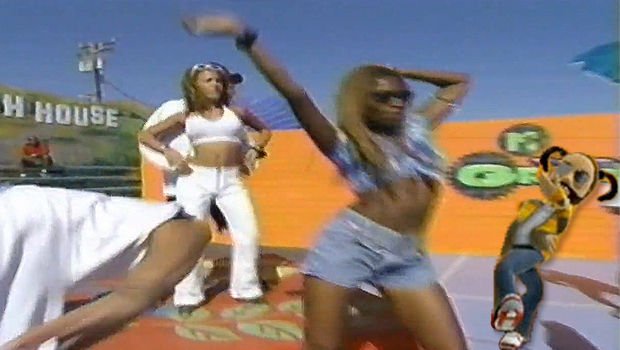 It’s odd to think back to the days when people were skeptical about Kinect.

Okay, so we are still skeptical that the hardware will have any worthwhile games in 2011-2012, but back in the summer of 2009 many doubted if the Kinect (then called Natal) would work at all.

Microsoft’s E3 2009 press conference was its proving ground for the device. After Steven Spielberg waxed ecstatic about the hardware and a flashy video was shown, our attention was captured.

Then, Kinect creative director Kudo Tsunoda takes the stage and gives a demonstration of the device’s ability to match body movement with his on-screen avatar. It looked pretty damn great, until Kudo got cocky.

“You ever wonder what the bottom of an avatar’s shoe looks like?”

Kudo turns around for dramatic effect and suddenly kicks out his leg.

Virtual Kudo suddenly flips out, bending backward, throwing his arms crosswise and contorting his legs in a way one can only imagine would elicit an unbearable amount of pain. Someone must have hit the “OH SHIT!” button backstage, because the avatar suddenly suffered a spell of narcolepsy – the unexpected shift to the avatar standing, hunched over in a sleep-state only added to the hilarity.

Or, perhaps, Virtual Kudo was some sort of soothsayer, predicting gamers’ collective apathy toward Kinect’s showing at E3 2009. 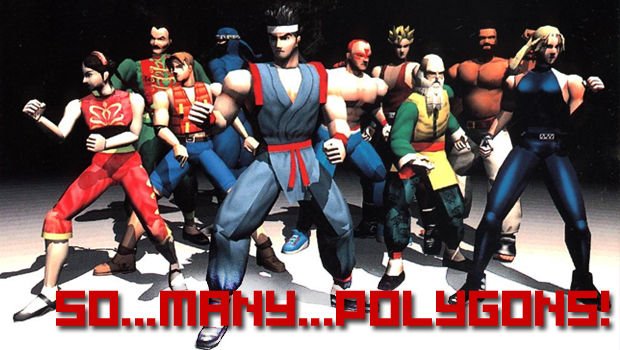 During Sega’s 1995 E3 conference – the first E3 ever – the company’s president dropped a bomb on retailers, developers and consumers: he announced the Saturn is out in U.S. store shelves the day of the presentation, four months before the scheduled U.S. release.

It hurts to put this here, because, in all honesty, Saturn’s U.S. stealth launch was kind of awesome – at least, in theory. It’s a classic E3 moment. It’s the moment everyone waits for: The sort of huge announcement that takes everyone by surprise and gets everyone talking.

The problem is that Sega didn’t think things through.  There were only six launch games, since most developers were depending on having four more months before sending their games out to retailers. Not to mention most retailers were out of the loop and had trouble stocking the systems.

The lack of games along with a high price tag ($399) made the console unpopular with consumers who instead chose the graphically superior and $100 cheaper PlayStation the following September.

The real shame is that the Dreamcast’s 1999 launch got everything right, but it was too late for Sega.

8. Rock Revolution: It’s the notes that you don’t play, man!

During Konami’s demonstration of Rock Revolution, its uninspired Rock Band clone, the on-stage (virtual) bassist failed so hard that the game canceled out of the song. Maybe it was due to on-stage jitters or faulty hardware — although, she said it was her fault afterward.

A YouTube commenter said it best: “There’s nothing worse than being booed by a real crowd and a virtual crowd at the same time.”

Watching this virtual bassist miss nearly every note to the most basic song (The Ramones’ “Blitzkrieg Bop”), as her drummer companion nailed is it, is incredibly awkward and hilarious. At least it got everyone’s attention on the game, if for only a short while and for all the wrong reasons. 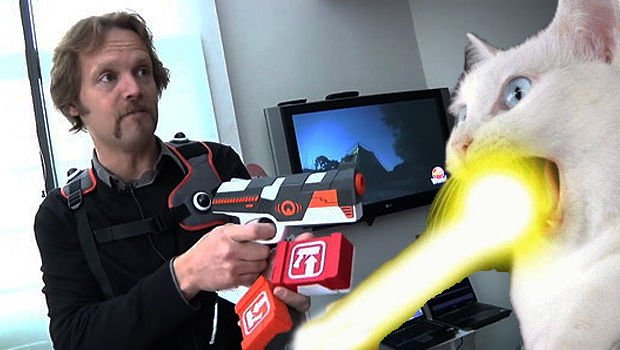 Despite the naysayers who said Ubisoft would never be able to outdo their 2009 snorefest, featuring Pelé and James Cameron, the publisher came out swinging in 2010.

After presenting Child of Eden and Assassin’s Creed: Brotherhood, the audience was loosened up and expectations were lowered.

“Oh, more video games. Whatever,” we all thought.

Then, things got real.

All of a sudden girls ran through the auditorium, doing cartwheels and firing infrared laser weapons of the future. What is this bizarre technology that was totally never on sale at Walmart six years ago for $40?

Why, it’s Battle Tag of course and you can experience the game that “gamers have been waiting for” at the insanely reasonable price of $130!

Even Innergy, Ubisoft’s state-of-the-art breathing simulator couldn’t get the audience excited afterward. Then again, maybe they were still baffled from what they just witnessed prior.

6. Mortal Kombat steps up 2 the streets

Mortal Kombat and Killer Instinct always had a grudge.

Which game had the best combos?

Which one had the best promotional dance soundtrack?

At E3 1995, the games settled the score once for all with their floor show unveils that involved … choreographed dance?

To be fair, Mortal Kombat’s showing was more of a sexy ninja fight between Jax, Sonya and Kung Lao. If you, distinguished reader, can appreciate tight-latex pants and bad 80’s hair like I do, then you will find much to love in this clip.

What really makes this a contender is the press representative who gives the most ridiculous speech, laden with embarrassing buzz words and marketing nonsense.

“To make sure this MEGA event is also a MEGA success for retailers, Williams is tagging up this product release with the most comprehensive, fully integrated marketing program in the industry’s history.”

With double the tight, latex pants and one of the most killer dance routines to ever hit E3’s floor, how could Killer Instinct not win?

Gamers and press waited all day to see Rare’s arcade fighter demoed on the Ultra 64, but that wouldn’t come to fruition until a year later. Nevertheless, minds were blown and asses were shook as six bodacious dancers got down to a Killer Cut. Behind the dancers, screens displayed the game’s characters dancing, while a giant animatronic tiger, between the screens, hypnotized anyone watching the debacle.

Its red eyes glaring, a voice echoed in the mind of everyone standing before it: “Best E3 presentation ever. Must buy Killer Cuts.”

Nintendo’s presentation of Wii Music was a low point during its uneventful 2008 E3 presentation, for several reasons.

The game’s lifeless, emulated drum sounds paired with Ravi’s gestures and faux-hawk lent an unprecedented air of douchebagginess at Nintendo press conferences. Attendees looked on in horror, as Ravi soldiered forward and put on his “Slyvster-Stalone-pre-ejaculation” face. Those outside the auditorium, fretted something awful must have happened.

“Perhaps, someone is having a seizure on a bargain bin drum machine and there is no one around to help,” they may have thought.

The best jokes are all about perfect timing.

While many walked away from Sony’s E3 2006 conference snickering over Kazuo Hirai’s “RIIIIIDGE RACER!” or in disbelief of the PS3’s $599 introductory price, it’s the Giant Enemy Crab spotting that pops up the most Google results, five years later.

During a demonstration of PS3 launch title Genji: Days of the Blade, a timeless internet meme was born. Producer Bill Ritch, demoing the game on stage, introduced it as being historically accurate. Before the level loads up, he says the battles in the game “actually took place in Ancient Japan.”

“Sure, dude,” we thought, impressed enough with a HD Dynasty Warriors look-a-like.

Without missing a beat, the level starts up and a giant crustacean fucker leaps across the screen, toward the player.

“So, here is this giant enemy crab,” the producer says nonchalantly.  He then goes on to talk about flipping over the crab in order to “attack its weak point for massive damage.”

Text doesn’t do the clip justice, as so much of the hilarity comes from Ritch’s oblivious, dead-pan delivery. In 2006, he carried the promise of being the next Bill Murray.

Many doubted whether Jamie Kennedy would ever be able to top his flawless, incendiary performances in Son of the Mask and Malibu’s Most Wanted, but in 2007 Kennedy made his comeback in a way no one expected: drunk and high as hell, hosting Activision’s E3 press conference.

It’s amazing to think Activision would let Kennedy emcee the event. Rather than focusing on Call of Duty 4: Modern Warfare and Tony Hawk’s Proving Ground, the attention was put on Kennedy himself and his drunken banter. His jokes weren’t as much jokes as they were half-assed musings that focused on three topics: sex, drugs and not having sex. Maybe this would appeal to Call of Duty’s demographic, but the fact remains that this was supposed to be a press conference.

Not only does Kennedy embarrass the developers on stage and Tony Hawk, he starts calling the audience a bunch of virgins: “There are so many virgins in here that Richard Branson is doing this event.”

The amount of awkwardness on display makes the clip hard to watch, yet it’s impossible to look away.

At this time, Activision has neither confirmed nor denied whether Jamie Kennedy will be able to get out of jail in time to host its conference this week. Keep up with our E3 coverage for updates!

Konami’s 2010 press conference, when dissected part by part, could fill in a top ten list of its own.

Traditionally, Konami’s press conferences are rather dry, focusing on Hideo Kojima’s latest Metal Gear Solid projects and running through trailers of upcoming titles. My guess is that Konami was tired of being overlooked at E3 – due to their time spot that takes place during show floor hours – so they decided to make the show more eventful, in the hope that people would talk about it. Mission accomplished, Konami.

Between Dance Masters producer Naoki Maeda and Ninety-Nine Nights II producer Tak Fujii, there is an abundance of quotes that came from this conference. Fujii even has his own soundboard!

My favorite Maeda quote:“Now you can move your fat body freely.”

If only it were that easy, Tak Fujii …

Are there any E3 disasters I left out that you would have included?

Post your prediction of who will have this year’s biggest E3 disaster, along with how you think it will happen. Whoever posts the best reply will be sent an utterly useless, to-be-announced item of E3 swag.