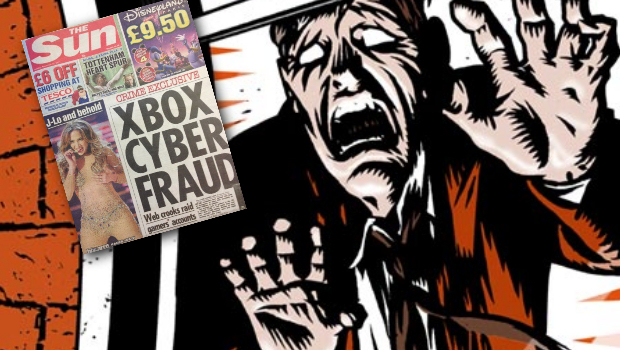 Shitty tabloid The Sun has a CRIME EXCLUSIVE on its front page, warning Britain of a terrifying new problem — Xbox Cyber Fraud!

While the Sun claims thieves have “hacked” into Xbox Live accounts, it’s nowhere near as scary. It’s actually the same kind of phishing scam that most smart gamers (and Internet users in general) should already be aware of. Basically, enterprising criminals ask users for credit card and personal details in exchange for things like free Microsoft points. Obviously, there are no free points, and the idiot user has just taken part in his own robbery.

Of course, since you’d have to be a moron to believe anything printed in The Sun, I dare say the paper’s readers are exactly the kind of people who need to be warned about phishing. It would be better for The Sun to warn people sensibly and effectively, but that would mean they can’t use words like “cyber” and “hacking” in their articles, which isn’t fun at all. All British tabloid journalists wish they were in The Matrix, you see.

Microsoft, for its part, promises that security is still of the “utmost importance” despite The Sun‘s SHOCKING exclusive story on the Cyberterror Hackvampires. This whole thing serves as the cue for an obvious reminder, though — do not, under any circumstances, give your personal info to some random guy on Xbox Live, for crying out loud!