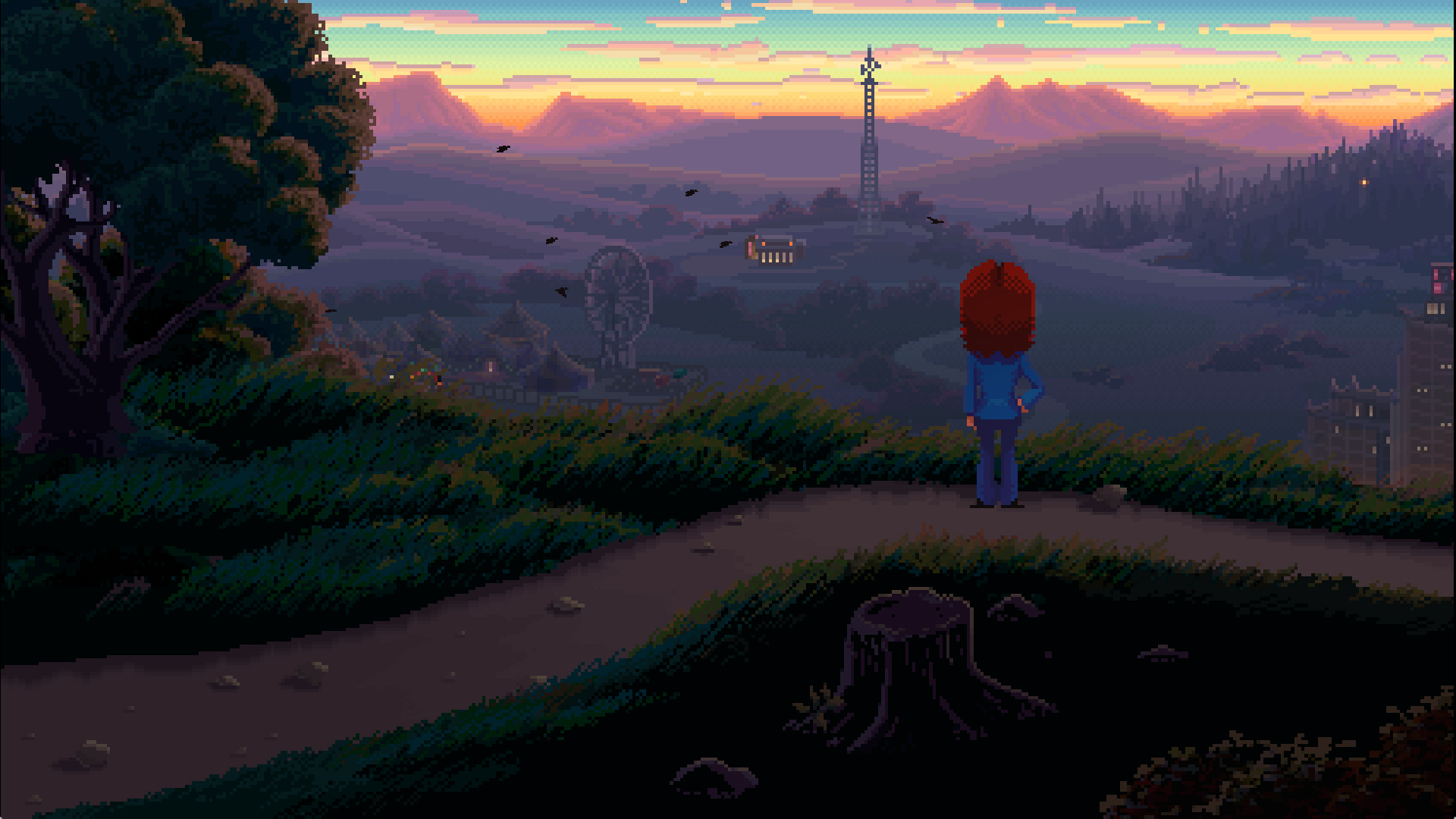 Thumbs-on with this thrilling throwback

PAX this year was a little strange for me. I was brought on to Destructoid just as the deadline to apply for media badges expired, so I went to the show as a regular attendee, and didn’t take appointments like Brett and Jordan did. I still wanted to help out where I could though, so Brett recommended that I spend some time checking out independent games no one had appointments for in the Indie Megabooth and elsewhere on the show floor.

The first game I tried out was also one of my favorites. Thimbleweed Park was successfully kickstarted back in late 2014, and promised a single-player adventure in the style of the LucasArts classics Maniac Mansion and Day of the Tentacle. It’s being headed up by Ron Gilbert and Gary Winnick, the co-directors of Maniac Mansion, and the demo I played made several references to their shared past at the studio and the games they created there.

The LucasArts adventure games of the late ’80s and early ’90s were known for two things: their sense of humor, and their friendliness to players. Unlike the competition, LucasArts adventures rarely had a situation where the player could permanently fail and have to reload their save. This encouraged experimentation, and left the creators ample room to put in jokes when you tried to rub two items together that didn’t make a lot of sense to combine. Thimbleweed Park looks to continue both of these traditions, and both my friend and I let a few giggles escape as we played through the PAX demo.

Thimbleweed Park begins with two federal agents (legally distinct but bearing striking similarities to Mulder and Scully) examining a dead body, face down in a river under a bridge. Their first task is to photograph the corpse “before it pixelates any further.” This seems simple enough, as the female agent is already holding a Polaroid camera. Unfortunately, she doesn’t have any film.

This is where the game introduces the idea that each character you control has their own separate inventory. The male agent has the film, and you must use the “Give” command to pass it from one character to the other before you can take the picture and move the plot forward. You can select which character you want to control using a menu on the top right, and the “Give” command allows you to shuffle items between them as long as they occupy the same space. Once this is taken care of, the female agent must “Use” the film with the camera, and then “Use” the camera on the body to take the photo.

These commands are handled by clicking on one of the action boxes in the lower left of the screen. There are nine of these, and they allow you to try different interactions with things in your inventory and in the world. These boxes should look familiar to adventure game veterans; for every object you can try to Open, Close, Give, Pick up, Look at, Talk to, Push, Pull, or Use it with another item on screen. It’s a variant of the old SCUMM (Script Creation Utility for Maniac Mansion) engine used in several LucasArts adventure games.

Once we had taken the picture, we looked around the crime scene a little more. We found a chainsaw in some deep brush and as we kept moving to the right, heard violin screeches that sounded like the shower scene from Psycho emanating from a nearby sewer grate. The male agent assured us that there was nothing to worry about, however, just someone practicing their violin in the sewer. Like you do.

We decided at that point to head to town, and walked around a bit, separating the two agents to cover more ground. The town itself has a lot of character, and has clearly seen better days. Abandoned, run-down buildings abounded, and even though we were limited in where we could walk to in the demo, it was clear we’d be exploring the town thoroughly, so there was a lot of attention to detail regarding the setting. There’s some weird stuff going on here, but it’s all below the surface, and we got sort of a Twin Peaks vibe from exploring. One running joke is that everything in the town runs on vacuum tubes, and some of the puzzles seemed to involve finding or repairing tubes on various appliances.

We sent the female agent to the town’s police station, and the male agent to a diner, where he struck up a conversation with one of the locals. The waitress began telling him the story of the ruined carnival at the edge of town, and at this point the game shifted perspectives as we played through a flashback. We lost control of both agents at this point, and took control of a new character.

This section dealt with how the carnival’s star attraction, insult comic (and Ronald McDonald lookalike) Ransome the Clown became cursed and lost his fortune. Before we could move the story along, we took control of Ransome, and had to find his makeup, comb his clown afro, and recover his joke book from one of the carnies, to whom he owed a sizable debt. I’m not sure how you lose money betting on the duck shooting gallery, but somehow he’d managed it.

Thimbleweed Park is clearly based on adventure games from the late ’80s and early ’90s, but it does make some concessions to more modern technology. Although everything is crafted out of pixels, there’s no apparent limit on how many colors can be shown on-screen at once. I also noticed that Ransome’s home is in a trailer, and the entire screen tilts to follow his weight as he walks from one side of it to the other. After we managed to prepare and go onstage, we lost control of Ransome and regained control of the male agent.

Some of the humor works better if you’re familiar with Gilbert and Winnick’s earlier work. Again, Thimbleweed Park isn’t shy about reminding fans of Maniac Mansion and Day of the Tentacle, making references to both of those games as well as both men’s former employer, LucasArts. For example, during Ransome’s segment, the amount of money he needs to repay to the carnival worker is $1138 — a reference to George Lucas’s first film, THX 1138.

After finishing up the not-quite-tragic story of Ransome (who is, quite frankly, a total jackass), we wandered into a dark alley, where the male agent was hit in the head by a shadowy assailant and dragged off screen. Control switched immediately back to the female agent, who we’d left standing in the police station. It’s worth noting that at this point we lost control of the male agent entirely, meaning we lost access to his inventory as well. Presumably, you’ll be able to recover characters eventually in the full game, but once we lost him in the demo, he was gone for good.

We looked around the station for a bit, hoping to meet the sheriff or at least alert the coroner, but no one was there. One of the booth attendants we spoke with said that some of the characters that will be in the final game had been removed for the demo to make it flow more quickly. Still, we poked about in the coroner’s office, discovering another Maniac Mansion reference when we clicked on the skeleton, advising us to return it to Dr. Fred. After wandering for a bit, we sent the female agent to the same dark alley to check on the male, and wouldn’t you know, she got knocked out and dragged away too. Since we were now fresh out of playable characters, this ended the demo.

Some of the town was blocked off, and it was clear that there was more to explore in the full game. My friend and I had a lot of fun even in the short time we had to play the demo, and I’m looking forward to seeing more of this one before its targeted January 2017 release.