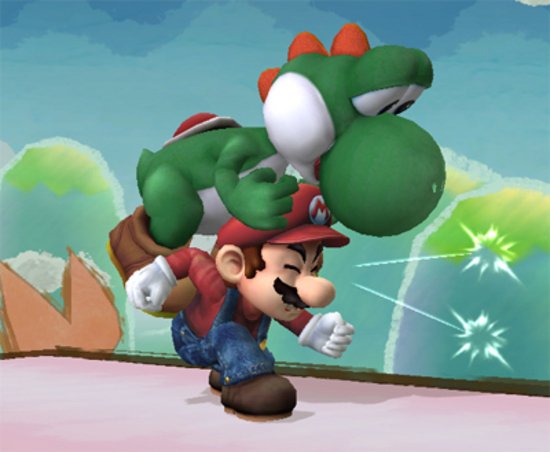 The DOJO week started off with Zero Suit Samus showing off her special moves. You can paralyze your opponents, fire at people’s feet and use her Plasma Whip to whip people, grab enemies, and hang from an edge. I got a little giddy when I listened to Tuesday’s update. It’s the WarioWare stage music called Ashley’s theme. If you’ve played the last couple of WarioWare games, then you’ll know Ashley’s theme is always very funny and very cute. Check out the Japanese section, for the Japanese version of this song too. Tuesday also brought us Kirby’s Final Smash and you should already know what it is. Kirby summons a giant pot and your opponents are forced into the pot. After some ingredients are added, items pop out of the pot and your enemies are sent flying out.

Everyone and their mother knows what happened on Wednesday. Sonic has been revealed to be playable with video goodness showing us what his “game” is. A compilation video was also posted on the DOJO showing off a lot of the things the DOJO has revealed in the past few weeks in action. Thursday brought more Sonic news with a look at his special moves set. He can of course do his Spin Dash. He also has a move called Spin Charge which is what you do to power up. Finally, his up special move is Spring Jump in which he takes out a Spring Jump so he can bounce into the air. Other characters can use the Spring Jump as well.

The week ended, kind of lame really. Snapshots are coming back and this time around, you can take a snapshot whenever you like — You don’t have to be in Snapshot mode. You can save the pictures to your Wii or SD Card and even send your pictures off to your Wii friends. Other than that, the last screenshot in the DOJO update has a blurred out item. They can’t show it yet because it’s not a final feature. Wonder what it is …Sakurai also told us that the game is delayed and that they’ll have it on demo at E for All next week.

So what did you think of all the Smash news overload from this week?