[Community member AwesomeExMachina had the opportunity to speak with a group of game developers from De Paul University working on the game Octodad, which is bizarre, awesome, and definitely worth your attention. Want to see your own work on the front page? Write something awesome and put it in the c blogs! — Kauza]

I’ve knocked over the same wine glass for the sixth time. I’m simply trying to move it a few inches into the sink, because my wife politely asked me to wash the dishes and because she holds onto a banana I desperately need to finish my octopus decoy. But I keep knocking it onto the floor. My limbs just keep slapping it around. At one point, I actually hurled it across the room as if it was placed on a precariously taught catapult. Finally, I succeed and the last glass is in the sink. But even as my wife presents me with my reward in her outstretched hand, I can’t seem to grab it. I press a wrong button, switch to my leg control, and tumble over our dining room table.

The motion I search for should be simple and would require the most marginal of motion in reality. But I am in a quaint, colorfully painted digital home, reminiscent of a 1950s dream, and I am an octopus in a suit, who is trying desperately to be a father. I am a terrible father, it seems, and even worse octopus. But this is the whole point. Because I am not struggling with just the control scheme, but also with the incapacitating laughter of my clumsy failures.

I am playing Octodad and movement is an intentional nightmare. My characters has no thumbs and no hands. My tentacle can adhere confidently to objects, but moving it from one point to another is a game of patience and disaster. Everyday motions like picking up objects require rapt attention. The two legs seem often unable to support the character’s weight and their movement is likewise loose and unhinged. My character is a squirmy mess of poor motor control.

Octodad doesn’t want your money – it’s free to play, in fact. It simply wants to make you laugh.

Walking is performed by holding down the left or right mouse button, dragging the mouse forward to move your “foot,” and then releasing it to place it. It’s an intentionally clumsy system and results are just that. You will fail quite frequently simply trying to leave a room, twirling backwards inadvertently and putting the titular octopus into accidental splits. But this is the design, these controls are part of the challenge. Your limbs function not unlike those claw-arm machine games and, just as such, Octodad is rigged to supplement your failure. But the intentions are much less nefarious.

Lead Artist Nick Esparza is reassured to hear my reaction; he breathes a sigh of relief to hear that I cackled wildly through the game. And I did, a lot. “The entire time through development,” Nick tells me. “We were just terrified. What if no one can play this game? What if it’s too hard? What if it’s just really stupid?” My positive response is slight validation, but it’s only a drop in the bucket compared to the reaction the game has generated, particularly with the team’s exposure at this year’s GDC. The team and their game received press on Gametrailers, our own Destructoid, was briefly mocked amongst others by Mega 64, and even tweeted off-handedly by Cliff Blizenski.

Nick is part of a larger team, The De Paul Elites, who are a Chicago-centered student design team which spent the last year working on Octodad. His anxieties are echoed through the rest of his colleagues that are able to speak with me at their small design studio, which is, in reality, just a computer lab they’ve staked claim to with posters and stickers. Gameplay and GUI programmer, Shervin Hossein, chimes in to add another word to describe their game design process, “nerve-wracking.” 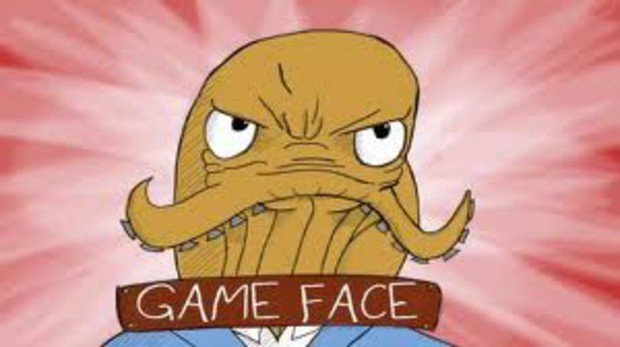 “In any game where you have a challenge,” Jake Anderson, the game’s Lead Designer tells me, “you want to make it so that it’s tough enough that people will have to try it a few times, so when they actually accomplish it, they’ll feel good.” It’s a dangerous gambit, to make players struggle on purpose. The comments on their Gametrailers feature is evident of that. Nick chimes in about the difficult balance the developers had to walk. “But, through playtesting and adjusting the interface and controls, I think we hit a pretty sweet spot between ease and difficulty versus fun and hilarity. And, luckily, everyone else seemed to agree with us.”

His apprehension is not unfounded. The controls of Octodad are not unlike the challenges of notoriously frustrating games like QWAP and GURP, which have enraged millions of gamers simultaneously. Though the team admits these infamous games led a fraction of inspiration to development, the comparison is unjust. These experiences are met primarily with frustration and rage. The only joy players may get is from just learning the basic controls, but most often ragequit before even getting close. The struggles in these examples don’t come from the player failing at the game, but the game failing the player. Octoadad is different.

The fumbling may be mandatory, it’s laden within the orientation of control, but the puzzles have been organized to be achievable. Even the tricky final obstacle, wherein the sushi chef villain who has been hounding your character challenges you to the ultimate test of human and octopus, climbing a ladder, is a plausible one. The comedy comes from the fact that you will be unable to do it gracefully. You will flip coffee tables, hurl tools accidentally, and involuntarily demolish everything in your path just to complete a simple goal. It rides a thin line, but Octodad succeeds at making failure hilarious and it does so through another risky, relatively unpaved angle in the video game world. Slapstick comedy.

It’s a universal truth that falling down is awful, but watching someone else fall down is hilarious. It’s a law of comedy and it seems to apply even when you’re controlling the one that keeps doing the falling. This kind of physical comedy in video games is not often seen, though. Jake tells me of the difficulty working in this realm when designing a game. “You have to make sure the laughter is right.” The others laugh, recalling some unspoken design catastrophe. “In a game, when there’s a glitch… well, that’s bad and so you make fun of it. We brought in playtesters, and they would laugh, but we had to make sure it was actually at the comedy and not the quality.” 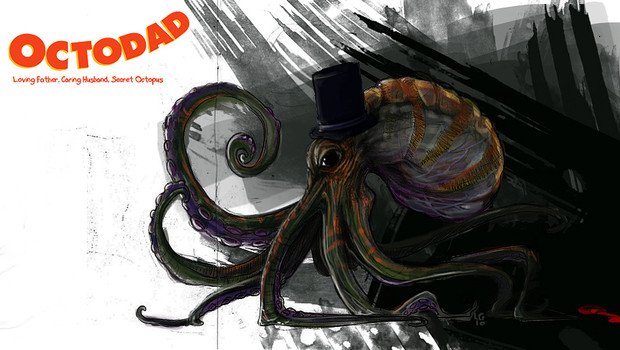 The root of the game’s comedy is made even clearer when the team recalls one of the early inspirations of the Octodad design. Back in 1998, long before the game was even an idea, complications and tragic bugs overtook a mainstream game so thoroughly, that it became an unintentionally hilarious cult classic. After the success of the Jurassic Park film, Dreamworks Interactive put out a game called Jurassic Park Tresspasser, which was an early game that admirably took on the risks of a physics engine, but ultimately failed both miserably and comically.

“Everyone hated it, because it was so unpolished and weird,” Nick recalls with a laugh. With gestures and restrained chuckles, the team regales me with stories of the strange ‘arm physics.’ “If you were holding a gun and you pressed up against something, your wrist just bends all the way around.” The ‘bone-less’ nature of the protagonist’s limbs in Tresspasser led to hilarious moments, where your gun arm would flop in all directions, even when simply just walking. “We just watched it and we were like ‘This looks like an octopus arm.’” Nick tells me. “This was after we had already decided it should be an octopus. But, that was the general theme. We wanted something patently absurd from something trying very hard to be normal.”

The ill-fated dinosaur game actually has its place in history, despite its grand failure within the market. There are those that hail the robust physics engine and graphic power of the game as a precursor to modern engines. The title was arguably ahead of its time and the video game technology at the time couldn’t properly support the ambition. Jurassic Park Tresspasser was an admirable attempted step forward in video game innovation, but only if you ignore the faults. For the Octodad team, however, it was the imperfection that was the inspiration.

“One of our biggest concerns when pitching the game, was how we were going to display the comedy,” Shervin admits. “With the IGF,” Nick adds, “the focus tends to be on more serious games with a message. They’re often aiming for something darker or some weird metaphor, but we just thought it was too great to pass up. Even if it wasn’t what everyone was expecting.” A gamble, but John chimes in with a smirk. “That’s the really important thing about indie vs. non-indie games. It’s essentially all about how nimble and risk-taking you’re able to be.”

Octodad falls within the nebulous “indie market,” which, like the music genre of the same name, has become more of a niche identity and less about the homegrown roots. It can be a somewhat unprofitable realm too, with most indie games priced low and many released for free and relying on donations. Some of the team not present admits aspiring to moving onto to AAA titles in the future, but the rest of the team isn’t disheartened. John tells me, “Plenty of us would rather continue to be in a situation where we can explore different ideas and do weird stuff like this.” 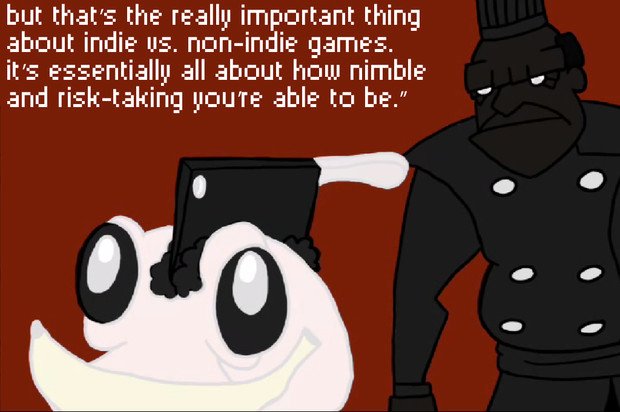 As for making money, the boys at De Paul don’t care about that right now. “Indie games are almost just as capable of making money,” Nick tells me. “But it’s often a secondary priority to the whole taking risks, trying new things, and being weird” Jake laughs. “Who would pay for a game from a team they’ve never heard of from a bunch of students anyhow?”

But, Shervin reminds us that Minecraft won this year in both IGF and GDC awards. “I think that represents a really important step forward for indie games, where they can be considered and judged right along side these AAA games. And they can really stand on their own merit. You know, with something built by just a couple guys in Sweden.”

The fate of Octodad will fare better than what happened with Jurassic Park Tresspasser. And though it didn’t take off like Minecraft or Super Meat Boy, all these games have a single thing in common. The teams behind them wandered into uncharted waters, despite the risks. The De Paul Elites took a gamble and took note of other risk-takers that failed before them. They succeeded in making players laugh at their games again and not only in spite of the clumsy failure, but because of it.

Octadad had its release and their showcase at GDC is over, but it’s not the end for the misplaced aquatic father. The title may see some more life breathed into it, as a large number of the development team intend on starting up their own indie company following graduation. Through it, there are plans to release further content and expand on the concept. They aren’t done making their players laugh wildly at clumsy missteps and calamitous blunders.

Especially with the planned adaptation of Kinect motion control into the game, which would bring the floppy wiggling of Octodad into your living room. It seems only perfect, since both Octodad and Kinect are already inherently all about making the subject look ridiculous. If you haven’t given the game a try, do so, and keep an eye on the team behind the affable dapper octopus, because there’s more to come. 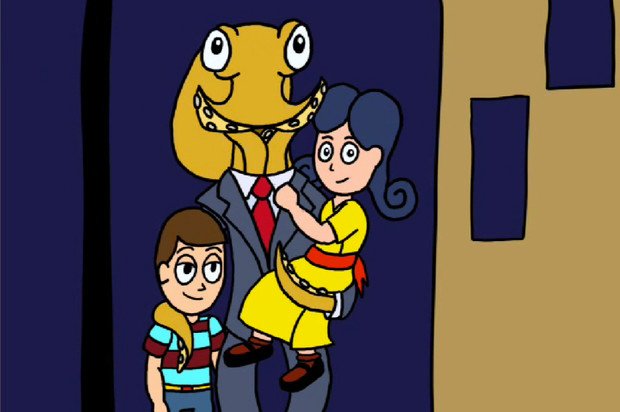