‘Did you find your mommy?’

What makes the difference between houses and homes? Is it the space itself or the people inhabiting them? Is it down to the memories we create for ourselves or the aged familiarity of the spaces around us? And if a room is indifferent to our philosophies and the objects we put in them, then why does it seem so safe?

For Silent Hill 4: The Room, the answers are found in the most voyeuristic of ways; holes in the walls, windows to the streets, and doors to adjacent hallways. Whole worlds are found not just in supernatural portals, but in the borders between everyday lives. Thematically, SH4: The Room is the ideal companion piece to Silent Hill 2, as both deal with the trappings of domestic nihilism on an intimate scale. But unfortunately, it’s best remembered as the black sheep of the series; a failed experiment that, while conceptually sound, was undone by its own rushed designs.

But whatever you or I think of SH4: The Room, it needs, now more than ever, to be celebrated for its bewildering existentialism and uniqueness from the usual fare. By breaking away from the infamous town, we saw Silent Hill at its most perverse, most abstract, and most alienating.

Though the town of Silent Hill was the series’ stalwart, it was beginning to feel stale; a terrifying place in danger of being your favourite holiday destination. It was time to move on, put roots in new places, and we found one in the form of South Ashfield. Where the eponymous town excited us with a cautionary network of alleyways and dead commerce, South Ashfield was far more narrow and alive in design; a downtown apartment building on a busy intersection, all oblivious to the horrors of Room 302.

SH4: The Room is a modern ghost story at heart, assimilating the usual Eastern commentary on social estrangement and visceral Western horror. It’s Rear Window and Ringu by way of House of Leaves or The Wind-up Bird Chronicle (and most notably, Coin Locker Babies). Worlds expand and contract, panopticon prisons take urban shapes, and ponderous social angst weighs heavily between the mod cons. Though Henry Townshend finds a way out of his apartment through a hole in the bathroom wall, escape is always an illusion, a false hope, and we buy into that through the contrast of a washed-out, lifeless Room 302 with the colourful and abstract worlds on the other side of the portal; not quite reality, not quite The Otherworld, but a misty recollection of both.

For Henry, real hope is found in the people around him, usually just a locked doorway out of reach. Compared to Silent Hill 3‘s minimal cast, here, we find a microcosm of downtown life – party girls and nerds, old men who should be retired, bullies, and sweet social butterflies – while the rest are strangers tucked away in tiny shoeboxes across the street. Most aren’t destined for anything more than the 21 Sacraments, a ritualistic killing spree conducted by Walter Sullivan, but they’re also refreshingly lacking in riddles and dreamspeak. Their everyday exchanges and daily routines make them real people rather than purpose built characters; which makes their inevitable deaths all the more disturbing.

Voyeurism is SH4: The Room’s greatest strength, feeding and preying on our own inquisitive nature, producing horror and fascination through the flip of a coin. Information is doled out in piecemeal, letting us play the amateur sleuth on South Ashfield Height’s tenants, before coming to the morbid realisation that this exactly what our captor (and the game itself) wants. And throughout it all, our intentions are never questioned when we linger on a subject longer than necessary; especially with Henry’s neighbour, Eileen Galvin.

“I don’t know if you’re a detective or a pervert,” wondered Laura Dern in Blue Velvet; a line perfectly apt for our machinations. When Henry and Eileen finally meet in St. Jerome’s Hospital, she’s a “broken doll”, an image of sex and death in a plaster cast and party dress. The eroticism on display is meant to be simultaneously wanton and repulsive; a painful looking reminder of our obsession and regret. When Eileen struggles to keep up, or when Henry has to find new paths for her, the emotional attachment overrides the chore.

Unlike Maria, Eileen never quietly shadows Henry on their journey. She fights back, decipher clues, and lends a comforting voice. Their companionship is constantly threatened by the presence of Room 302, as Henry is forced to leave her behind, and what was once a place of sanctuary becomes less inviting as time goes on. And the switch between needing Room 302 to Eileen becomes increasingly prominent in the second half, when the possessions and exorcisms get out of hand.

The human connection ensures Henry and Eileen’s survival. Between them, they quickly gain the one thing Walter Sullivan has always yearned for. His deplorable acts are underlined with abandonment issues and sinister adoption, asking the audience if its either down to nature or nuture. Walter’s killings are brutal and inhumane, so divorced from his childhood that he’s split into two forms. Though they want the same thing, both child and adult Walter are at odds with each other – the child being a manifestation of memory and guilt that the adult refuses, much like Locane Twins’ murders, to acknowledge.

As king of his own Otherworld, an inanimate space becomes a living being through the projection of self and a change within language. It’s as much as a denial as the human form Walter takes, leaving everyone else to slither or stutter and peel away from the walls of his warped memories, unable to connect unless it’s through white-noise and death.

But despite this unique, abstract take on disconnection and projection, SH4: The Room is undermined by some questionable design choices. The emphasis on relentless, unstoppable enemies forces the player to miss out on details, the constant backtracking to Room 302 creates the slowest of start, an ill-thought out limited inventory, an arguably dull protagonist (though that’s more the fault of an early lack of interaction), and most erroneous of all, a repeat of locations in the second half. Though it pains this retrospective to say this, with SH4: The Room being a personal second favourite, it’s the perfect example of how video game narratives can live and die by gameplay itself.

Still, when SH4: The Room works, it does so by tapping into a free flow of subconscious fears and moving on from the comforts of Silent Hill‘s clichés. No radio warnings, not even a single flashlight, but the Otherworld was still out there, still finding ways to reach relatives of former victims, still bleeding from the rotten core and into new corners. The idea was finally less about another physical world and more of our own human flaws writ large, all scored by Akira Yamaoka’s best work. Most of it all, it made downtown life a little bit frightening again. 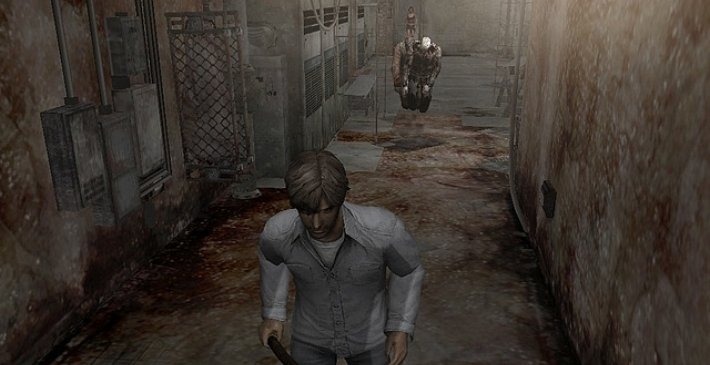 Though it would be the last of the “Team Silent” games, it would also be the last time, for a very long time, that Japanese horror games would be this bewildering and confessional. SH4: The Room casted an assimilated eye and frustrated mind, not to mention the most violent of hands, on our deepest social anxieties.

And yet, Silent Hill in its final Eastern form left us on a happy note, with Henry and Eileen joking about finding a new place, under a blinding sunlight. A human connection. After so many years of bittersweetness, you couldn’t ask for a nicer send-off from the darkest of video games.