Whether you’re a first-time Tetris Effect player or you’re showing up for the new timed-exclusive multiplayer modes, Tetris Effect: Connected is worth checking out – especially with Xbox Game Pass.

Aside from the original Tetris Effect story campaign and the objective-based Effect modes that I’ve been raving about for two years now, with Connected, you’re also getting a multiplayer suite. The new package is $40 on Windows 10 and Xbox consoles (including Xbox Series X/S), and Enhance has committed to a free update in “summer 2021” for Tetris Effect owners on PS4, PC, and Oculus Quest.

So, what are the modes? There are three head-to-head modes – Zone Battle, Score Attack, and Classic Score Attack – along with the namesake Connected mode, a three-player-vs.-one-AI-boss mode.

Out of those versus modes, Zone Battle feels the freshest – it’s all about clearing lines to build up attacks and then either strategically defending against or negating your foe’s attacks as much as possible by knowing when to enter the Zone to clear out junk. Score Attack is a one-on-one high-score battle, and once a player taps out, the other player has two extra minutes to cement their score.

Classic Score Attack works much the same way, albeit with a retro visual style, “stiffer” controls/rules, and a more back-to-basics approach to Tetris. You can’t do Hard Drops and there isn’t a Hold Queue. 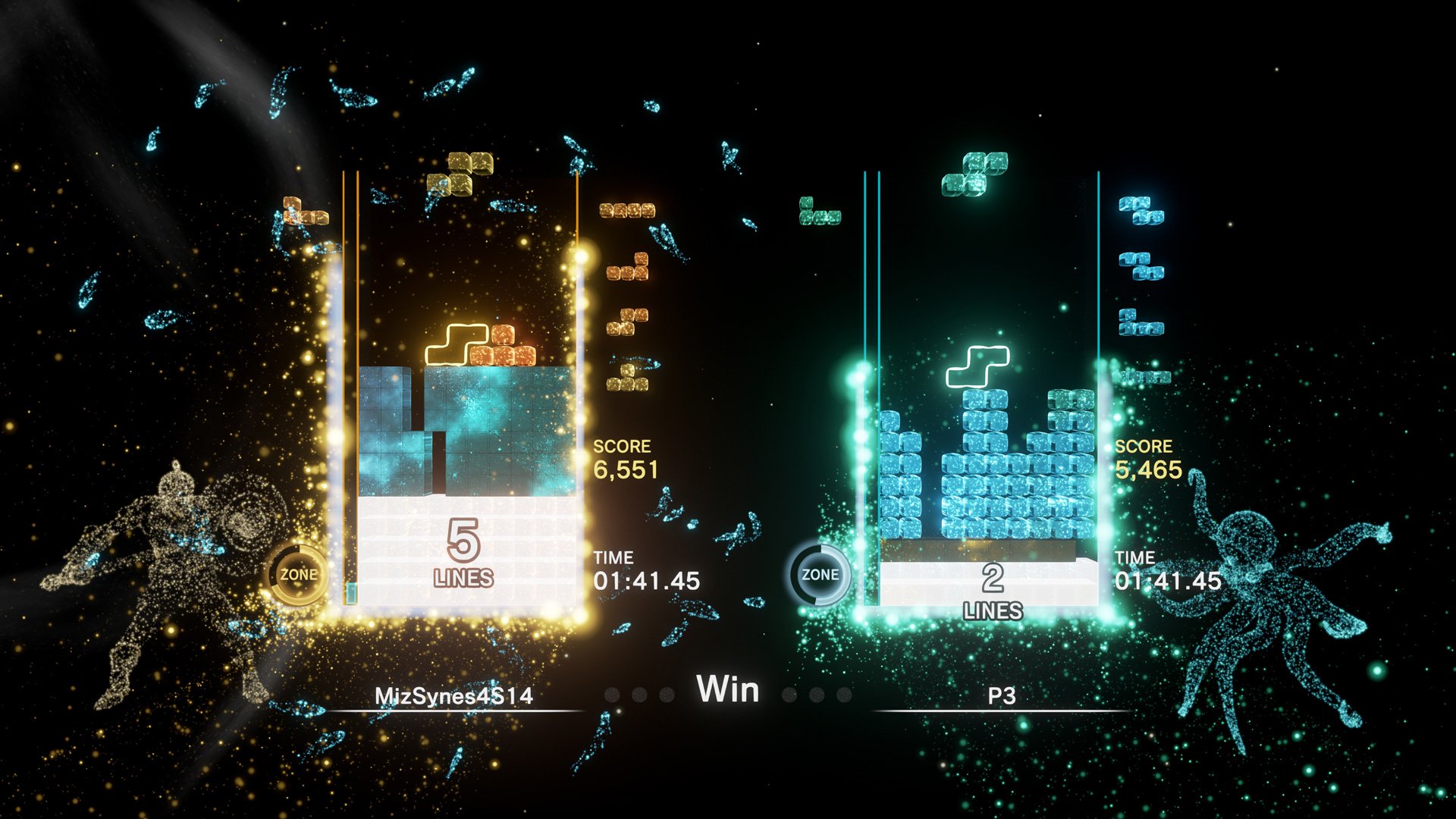 I’m not so sure I’ll stick with any of these long-term – I’m not that cut out for them – but I am very invested in Connected mode. In short, you’ll fight a series of (progressively harder) AI-controlled Zodiac Bosses with an assist from two other (human or AI) players. At first, your team’s play fields are totally separate, but as you clear lines and build up your shared meter, the three fields will temporarily merge into one. At that point, it’s an all-out race. You’ll take turns rapidly dropping pieces one after another in hopes of clearing as many lines as possible to send an avalanche hurtling toward the boss.

Connected mode is definitely chaotic and even stressful at first, but with practice, I started to feel more comfortable with the flow. (The music cues help.) In an attempt to make co-op Tetris fun and not maddening, you’ll get occasional purple pieces that can push down and “correct” bad placements.

It wasn’t live for testing yet, but there’s also a Connected Vs. mode in which a human player can stand in for the AI boss. That’ll be playable during 24-hour “Full Moon” events during weekends.

The multiplayer modes have their own fancy-looking space hub that feels right at home in Tetris Effect (take a minute to fly around and explore it) and player progression uses a tier system “based on an aggregate of your skill rating in all the different modes” as it rises and falls with each win or loss. 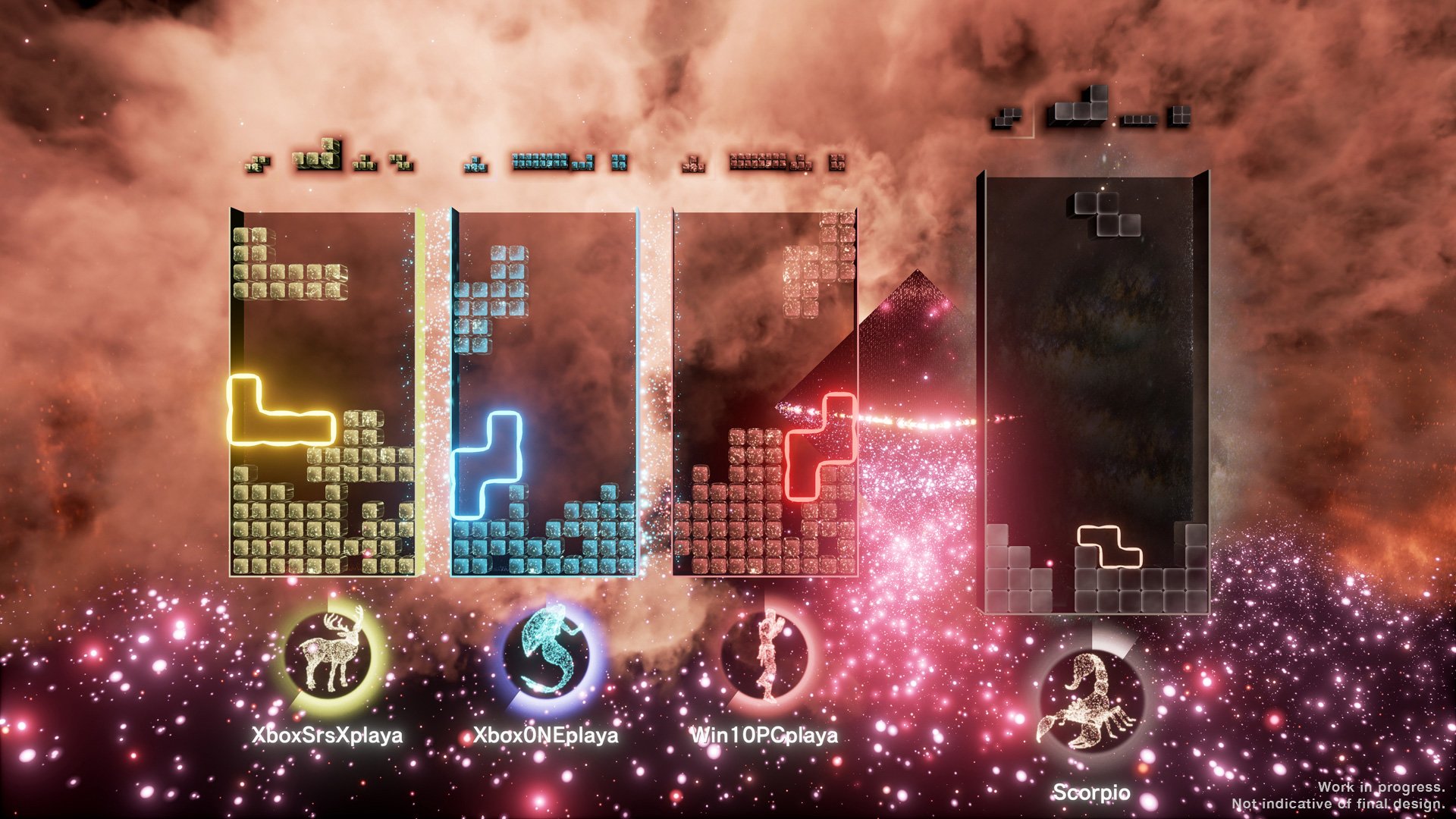 Curiously, the game hints that “as you move up tiers, you’ll also move ever closer to the mysterious obelisk radiating from the center of the galaxy: the Tetrimidion.” As for me? I just wanna unlock avatars.

If you’re super competitive, there’s a Ranked match option; otherwise, you can stick with Friend matches or Local matches against the AI. That goes for all multiplayer modes, too. You can set the AI’s competency, so if you’re struggling against the tougher Zodiac fights, you can crank up the AI partners.

I don’t necessarily think the new Connected content exceeds anything that was already in Tetris Effect, but after a couple of hours (with the Windows 10 version), the multiplayer modes do live up to expectations. This is an all-around excellent package for new players, and it’ll be a fantastic free update for returning PS4 and Steam Tetris Effect players next summer. We’re all together in this life.

[These impressions are based on a retail build of the game played via Xbox Game Pass on PC.]