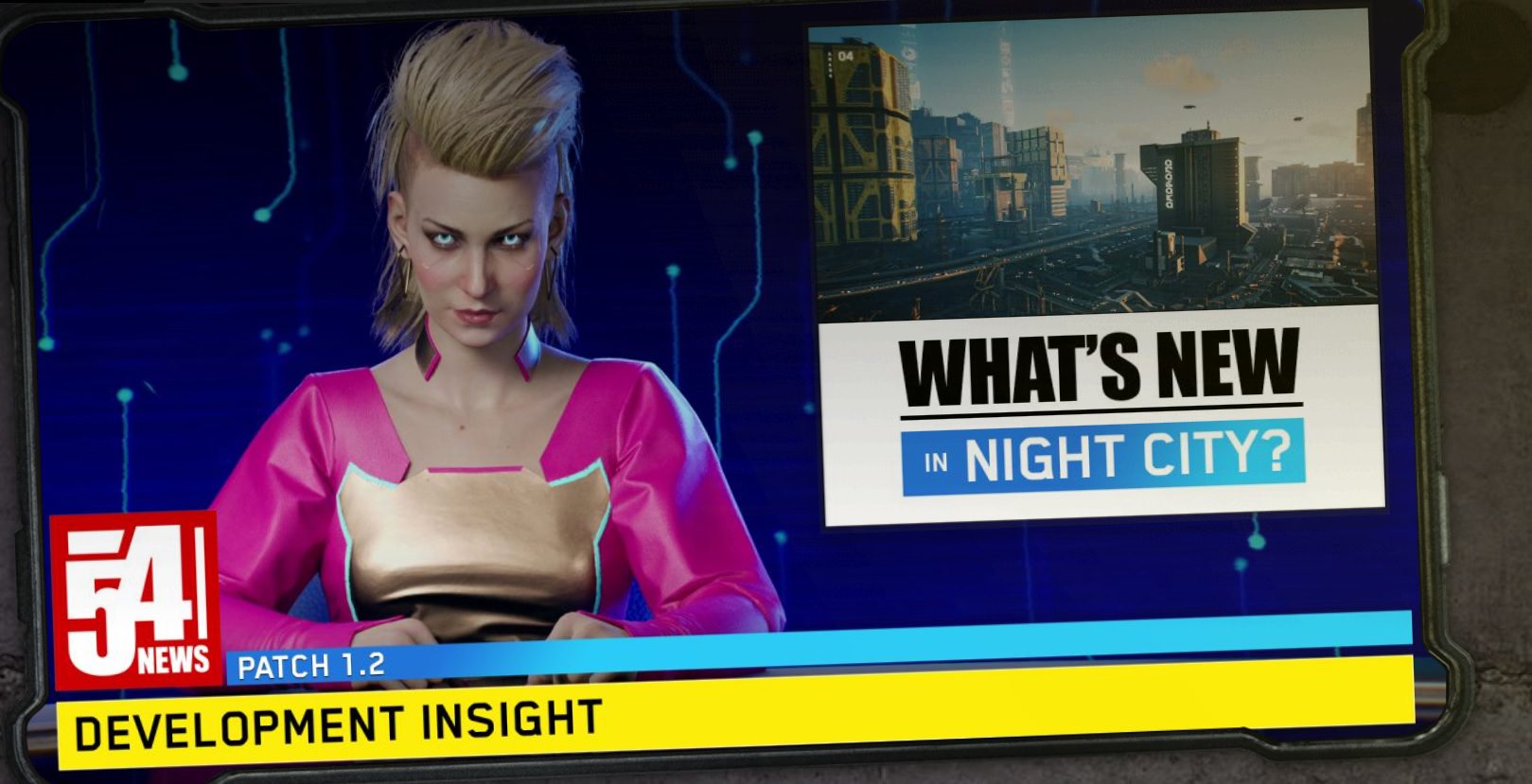 Cyberpunk 2077 has only gotten a handful of patches, and it still needs plenty of fixing.

Patch 1.2 is here, but it’s being delivered in a quirky role-playing format! CD Projekt Red is getting a bit weird this time around, providing notes in-character in the form of Night City (N54) news, with developer commentary. If you’re just looking for raw patch notes and want to avoid all the convoluted bits, we got you covered. Check them out below, all of which are delivered in an accompanying video format.

So what are the gists? NPCs, specifically police, are being adjusted to prevent weird spawning issues, and recon drones will make police feel more thematic as a whole and the world look less lifeless. Driving is also overhauled, and you can now adjust steering sensitivity with an in-game option. You can also use a new unstuck feature to rock vehicles out of glitchy areas (seems kinda stopgap, but hey!).

You can also more easily adjust keyboard controls, most notably dodging on double-tapping, which can be turned off. You have to give it to CD Projekt Red for trying, but for many, it’s too little, too late.

“This is an important step in addressing the behavior of the police in our game. It should decrease the problem of NPCs spawning behind players’ backs and create an impression that it takes some time for the police to arrive at the crime scene after the crime has been reported. We’ve also added a recon “drone” unit to create the feeling of the police assessing the situation.” — Patryk, Lead Gameplay Designer & Åukasz, Technical Design Coordinator

“Analyzing feedback on our driving model suggested a lot of players were having issues with the speed of the steering. Most complaints came from players using keyboards on PC or were on platforms with lower frame rates, and centered around how hard it was to keep cars off the sidewalks and such. We have added a Steering Sensitivity slider to the Options menu.

This allows the steering speed for all vehicles and all input devices to be slowed down, without affecting the maximum turn radius. When experiencing lower frame rates, our cars were harder to control. We traced this to some code that wasn’t handling extreme changes in frame rate properly. The steering speed is now very consistent from 20 to 60+ FPS. Last, we looked at a bunch of tweaks to individual cars and adjusted some of them that were too twitchy in low frame rates, including the player’s Archer Hella.” — Séamus, Senior Vehicle Programmer

“There are cases where our vehicles can get beached or high centered on stuff in Night City. We have now added an Unstuck feature that kicks in when you are accelerating and not moving. While holding down the accelerator, you can now rock the vehicle forward or back, or rotate it left/right.” — Séamus, Senior Vehicle Programmer

“Dodge on double-tapping a movement key can be turned off in the Controls settings. The Dodge action can still be performed by double-tapping the Crouch(toggle) action key (default C).

It should now be more feasible to move WASD bindings around the keyboard. There still remain a few bindings that need to be addressed, but these should be fixed in upcoming patches.” — Wojtek, Tools Programmer