‘I’m just playing, Marina, you know I love you…’

[Update: Nintendo has released a video thanking the fans for the support, filled will some of the cool fan art contributions to The Splatocalypse. You can check it out at the foot of the article.]

And that, as they say, is that. After two years of messy online warfare, Nintendo’s Switch shooter Splatoon 2 held its final splatfest this weekend, in which the global community took to the arena for an unprecedented 72 hours, determined to paint the town red (and green and pink, etc.) for one last hurrah.

In an event dubbed The Splatocalypse, players chose their final teams, standing with Off the Hook’s Pearl and Marina in the ultimate battle of Team Chaos vs. Team Order. The scores are in, and the day belongs to the Queen of the World, with Pearl’s Team Chaos scoring a huge 3 – 0 victory over Marina’s Team Order. Chaos reigns supreme!

But never fear, fans. Although it’s early days, it doesn’t seem that the event has quite leveled the Splatoon universe as some feared, nor has it harmed the special relationship between our wonderful hosts. In fact, after teasing a break-up of the band, a tearful Marina was consoled by Pearl, who told the octo-gal “Just playing Marina, you know I love you.” 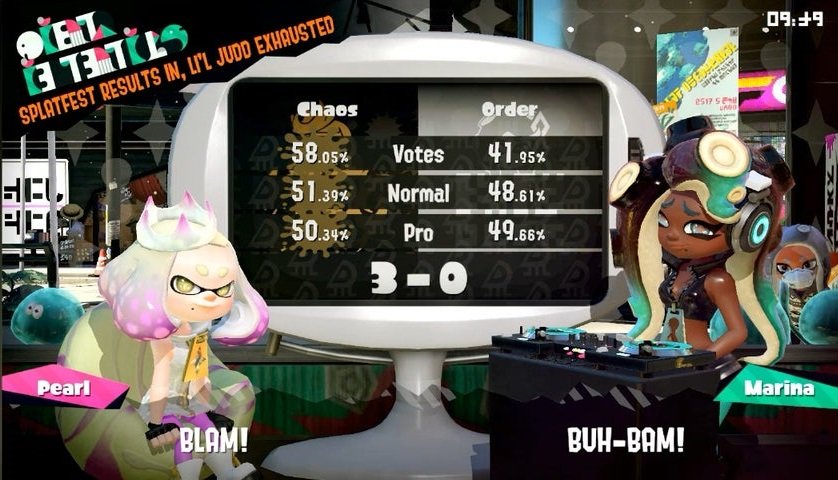 There’s another reason for Marina to smile, as she is the overall splatfest winner. If you take all splatfests from all territories into account, then Marina takes the gong with 43 victories to Pearl’s 37. Given that many expected Pearl to be an unsupported character – foolishly I might add – these totals are a close call.

This weekend brings to an end a series of great, intriguing, and occasionally crappy battles on a wide variety of topics, from food habits to movie genres, fashion choices to super powers, and even Ninja Turtles and Hello Kitty characters. For the community, it has been an emotional weekend, and while Splatoon 2 will surely continue as a popular online title for the foreseeable future, the splatfests will be surely missed… at least until we hear some happy news of a new title.

Personally, I can’t believe this is the last time I’ll be reporting on a splatfest, or its results, for some time. It’s been tremendous fun seeing the reactions to each topic, both here and elsewhere. And, although I often threw tongue-in-cheek shade at Marina, the fact remains that Off the Hook, as characters, are one of my favourite Nintendo creations, and I can’t wait to see what’s in store for them, and the franchise, in the future.

Until that time, friends, Don’t get cooked, stay Off the Hook.