My month-long countdown to the May 23rd release of Super Mario Galaxy 2 continues with another Mario-themed feature! Hooray!

Welcome to the second edition of The Gamer’s Red Carpet, the feature that critiques and grades the fashion choices of popular videogame characters!

Premiering this feature a couple months ago with the Final Fantasy series was an easy choice, as the Final Fantasy games are known for having characters in absolutely ridiculous, over-the-top costumes. Continuing now with the Mario series, however, was a little more difficult. The Mario games are known for fun gameplay, not for displaying a wide variety of beautiful, intricately-designed fashion pieces. Heck, most of the characters in the Mario universe wear the same outfit IN EVERY SINGLE GAME THEY STAR IN!

But, regardless of the challenge, this feature had to live on. Virtual Tim Gunn — the sassy character and co-critic for this feature — had to make another appearance! And, oh boy, does he ever. As you read this, Mr. Gunn is sitting there, waiting patiently after the fold, glasses on his nose, ready to sass it up all over the place!

Hit the jump as my buddy Virtual Tim Gunn (V.T.G.!) and I dissect and critique the fashion choices of some of the most popular characters in the Mario universe. Is the Mushroom Kingdom full of stylish refinement … or is it a candy-colored oasis of bad taste? 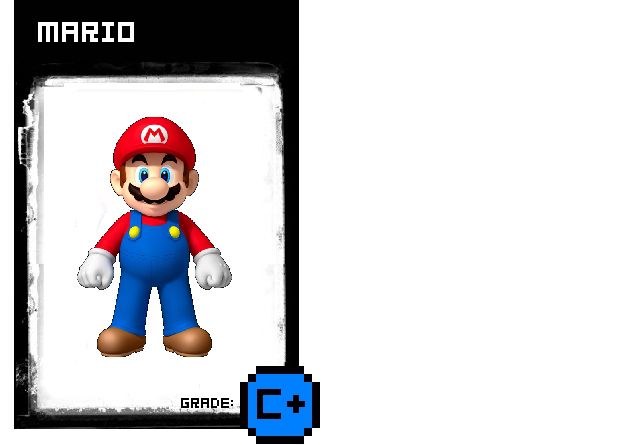 Fun fashion fact: Have you noticed when people dress up for Mario at costume parties or conventions, some of them actually wear red overalls? Mario hasn’t had red overalls since depictions of him in the original game more than 20 years ago! In most games, Mario wears blue overalls.

But, honestly, maybe he should go back to the red. At least red makes the eye pop. Mario’s blue overalls are boring and uninspired. The big yellow buttons help add a little flair, but overall, Mario’s classic, iconic outfit amounts to nothing more than what it is supposed to be: a plumber’s uniform.

His jaunty, puffy red hat (that giant “M” logo print is fabulous!) and polished white gloves add variety, but, after all these years, Mario is in definite need of a makeover. 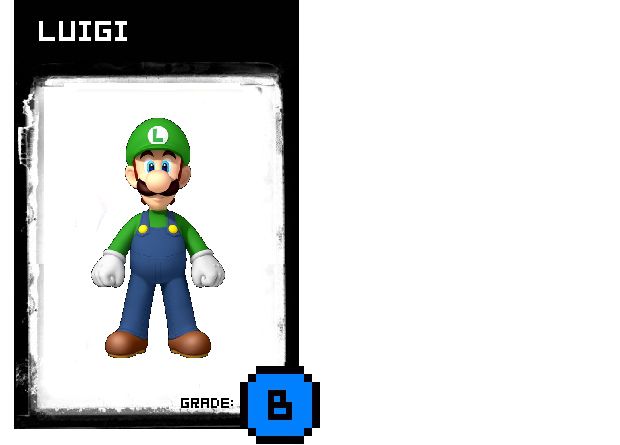 True, Luigi’s outfit is exactly the same as Mario’s, but sometimes something as simple as a color change can change everything. Luigi’s longer frame really works well with the more muted, cool green and blue color scheme of his plumber’s uniform.

Luigi may always be the sadly overlooked brother, but when it comes to fashion, his style is much more visually pleasing than Mario’s. 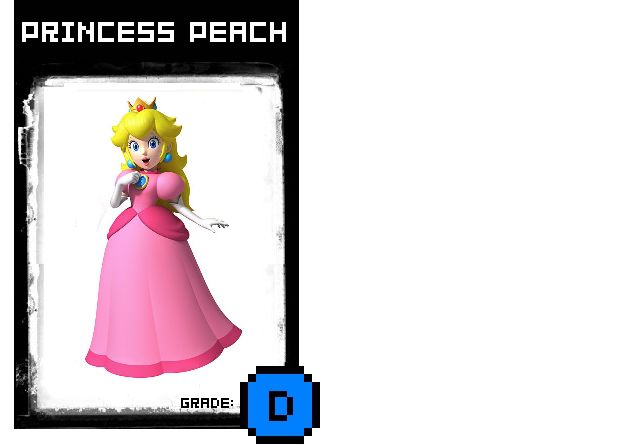 As much as I love Princess Peach and will defend her to the end (especially from sorely missed editors and their nasty name-calling), I will be the first to admit that her famous pink dress is awful.

Most unflattering is obviously the sickening color. Pepto-pink can be pulled off if used in the right context, but Peach’s dress is so old-fashioned — from the straight-out-of-Hello Dolly shape to the horrible neck ruffles — that the bright color only adds to the outfit’s crudeness. And don’t even get me started on the Rose-just-dropped-it-off-the-back-of-the-Titanic brooch.

Despite my extreme reservations about Peach’s fashion choice, I would still get a tattoo of her holding a parasol on my inner thigh. I love her so much. 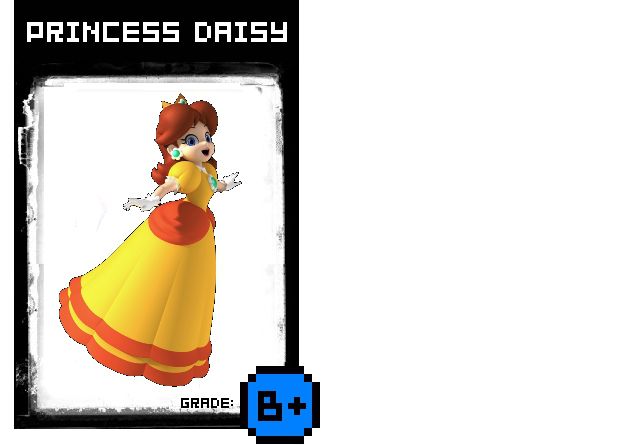 Just like Mario and Luigi, Peach and Daisy have almost the same outfits, but with different colors. And just like comparing Luigi with Mario, Daisy’s dress and accessories work much better than Peach’s. <sigh> As much as I hate to admit it (I am not the biggest Daisy fan), her choice of a brave yellow and orange combo dress is as flattering as it is retro.

Couple this with her aqua, flower-shaped earrings and brooch and you have a winning, pleasant combination.

Now wipe that silly smirk off your face, Daisy. This is only compliment you are getting from me! 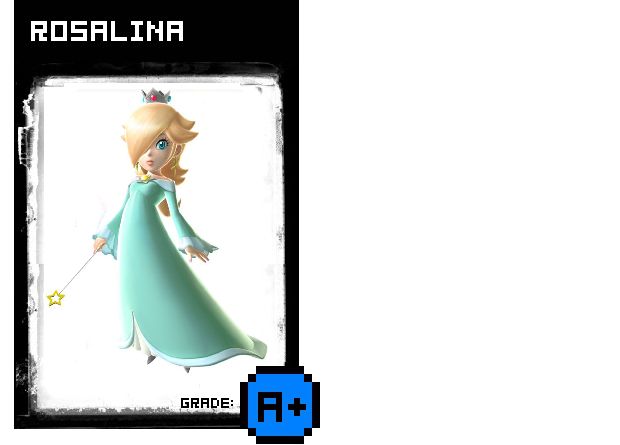 Now this I what I am talking about! Rosalina is an absolute fox!

While most of the Mario characters settle for outfits that err on the side of simple, Rosalina — the celestial stunner from Super Mario Galaxy — takes things up a notch with a fashion eye that is as bold as it is forward-thinking.

First there is the beautiful, light-blue color of the dress — a dress that gracefully swoops from its form-fitting top half to its perfectly cut bottom. Seriously, look how balanced the lighter trim around the neck is with the understated sleeve ruffles and shaped hem. GORGEOUS! 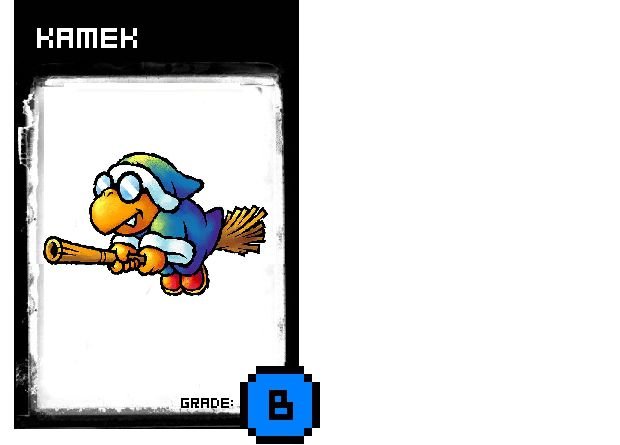 One of the main reasons I was confused if Kamek was a boy or a girl (for the record, he’s a boy) was because of his frumpy, completely androgynous blue robes and ridiculous Marcie-from-Peanuts glasses.

And maybe I am being unfair in my critique, but Kamek reminds me of what Janet from Three’s Company would look like if she lived in the Mushroom Kingdom. I have no idea why, but that makes me very happy. So, because I am giggling and thinking about the Regal Beagle right now, Kamek gets a solid “B.” 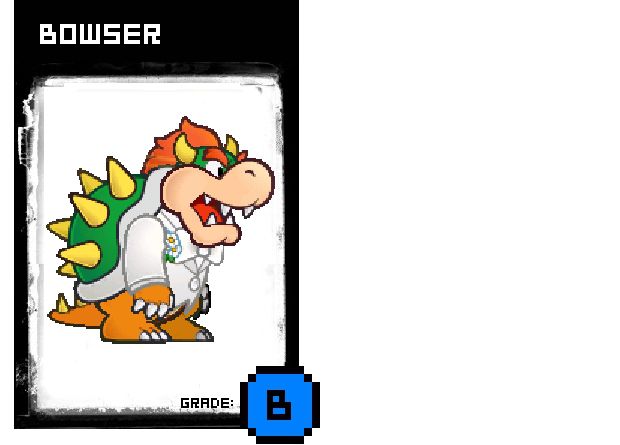 Bowser doesn’t normally wear any clothes (scandal!), so I had to reach into the ol’ archives and pull out a hard-to-find photo from his tumultuous past — mainly, his wedding and quick separation to Princess Peach in Super Paper Mario.

During his wedding, Bowser sported a rather sharp all-white tuxedo. And as plain and traditional as it is, he pulls off the look swimmingly!

The stark, smooth whiteness of the tux compliments the infamous villain’s scaly, colorful shell quite nicely. Adding a bit of whimsy and playfulness, the small bouquet of daisies on his lapel is also a welcome touch.

Who knew Bowser could class it up? 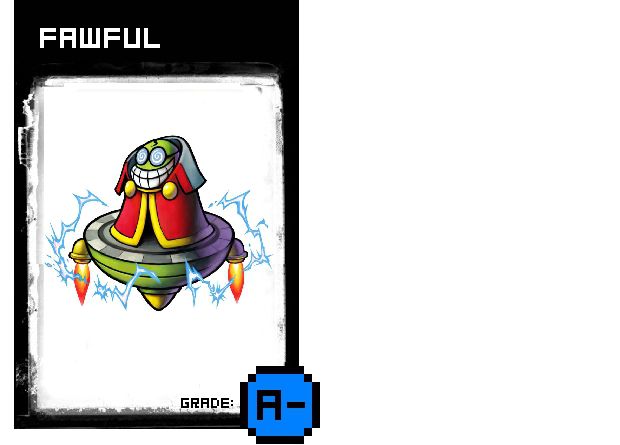 Proof that nerds can be just as stylish as the top models of Milan!

Fawful — the fan-favorite villain from the Mario & Luigi RPG series — may be a mechanical genius, but, man, he sure knows how to dress.

Yeah, his glasses may leave little to be desired (although they do give off a fun Lady Gaga vibe), but just look at that ridiculous cloak! It’s absolutely inspired! The huge yellow buttons; the bold colors; the high, flared collar. The entire piece is daring, mystical, and really could be seen wrapped around a skinny model as she fiercely marches down a runway in any of the major fashion cities of the world. 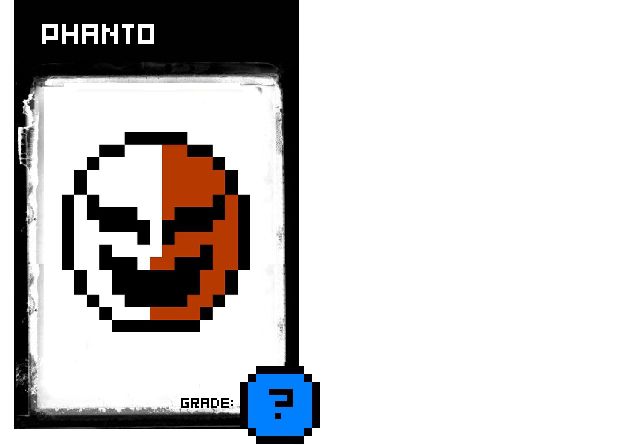 AHHHHHHHHHHH! PHANTO TERRIFIES ME! LEAVE ME ALONE, PHANTO! GET OUT OF THIS FEATURE! NO GRADE! NO GRADE! 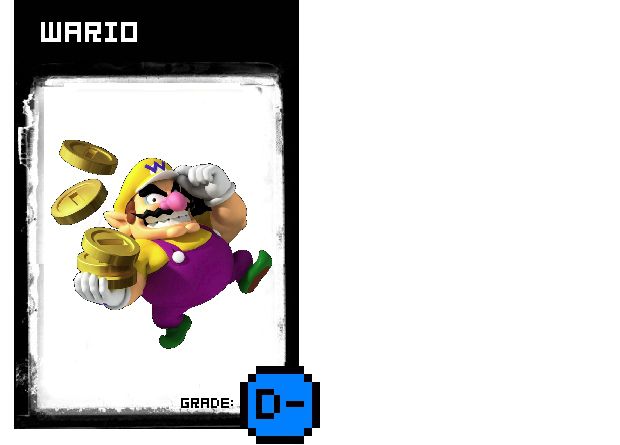 With fashion, sometimes complimentary colors work wonders with each other. A nice dark red dress, for example, could look incredible with the addition of a green or yellow draped scarf.

Sadly for Wario, his gasp-inducing combination of bright yellow, purple, and green does not work on any level. In fact, it actually makes my eyes hurt a little. Seriously, I am having trouble typing right now.

Wario fits the wild and crazy, wacky arch-nemesis bill perfectly, but his outfit is an unfortunate assault on the senses. 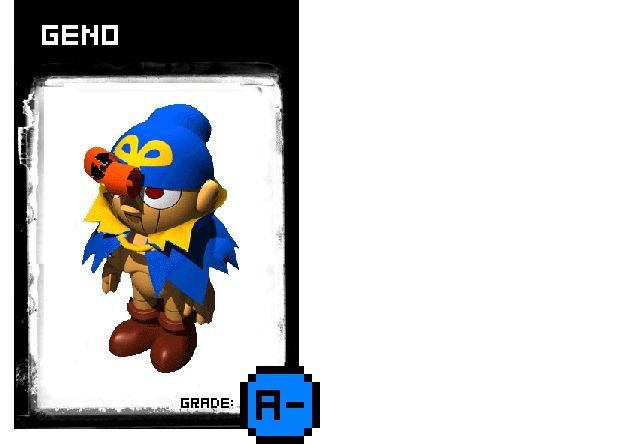 Who doesn’t love Geno? His character is easily one of the best parts of Super Mario RPG on the Super Nintendo. He is likable, useful, and an altogether interesting addition to the Mario universe. And his fashion choices — while falling a little short of being revolutionary — are equally as interesting.

It’s hard not to point out the fact that Geno is COMPLETELY NUDE FROM THE CHEST DOWN … but once you look past that (if you can look past that), his upper-area choice of clothes is very original and quite striking.

Color choice? Clean and refreshing. Oddly satisfying hat? Love it! (Especially the way the yellow pattern seems to swirl right into Geno’s orange ribbon curls.) The short, layered jacket? Awesome! All in all, a great outfit.

What do you think? Do you agree with our assessments on all the fashion in the Mario games? What are some of your favorite costumes in the Mario universe? Least favorite? Any chance some exciting new costumes that will be introduced in Super Mario Galaxy 2 (Cloud Mario!)?

What videogame series would you love the Gamer’s Red Carpet to tackle next? Sound off in the comments!