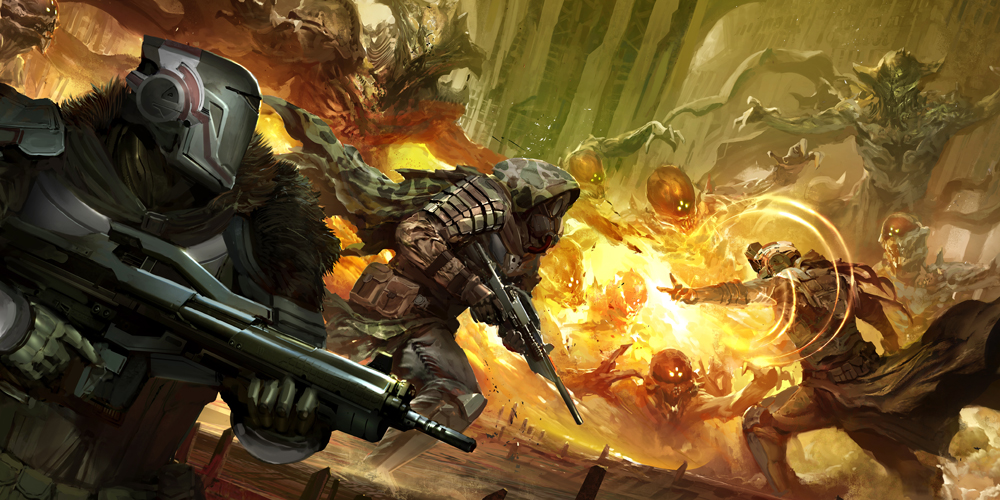 A first-person shooter set in a persistent, open-world sandbox

Finally, after years of speculation Bungie and Activision have revealed the first bits and pieces of what exactly Destiny (yes, that’s the official name) is all about. It’s a first-person shooter. It’s an open-world sandbox. And it’s a persistent world. It’s all that and more — something Bungie is calling a “shared-world shooter.”

Bungie is betting big, offering so much promise that only a studio like them could potentially pull it off. They redefined the first-person shooter genre with Halo, and they’re looking to redefine the genre all over again with Destiny. 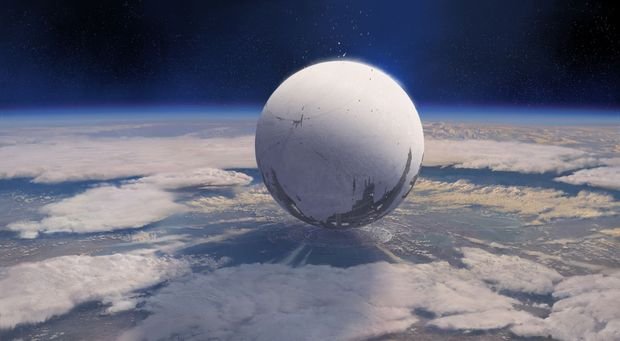 (The Traveler, resting above the last city of Earth)

Destiny takes place in a distant future after a golden age for humanity where it has populated the solar system and beyond. Your story takes place after the events of a horrible conflict where humanity was attacked by an unknown force and was brought to near extinction. Some humans survived, however, thanks to the Traveler, a big floating round entity that sacrificed itself and hangs above Earth where it made its last stand.

People came together to rebuild a new city under the Traveler’s protection, and soon humans once again ventured back into space to reclaim what was once theirs. Humans quickly discover a variety of alien creatures have taken up residence in their former territories, and the aliens are determined to be rid of humans once and for all. 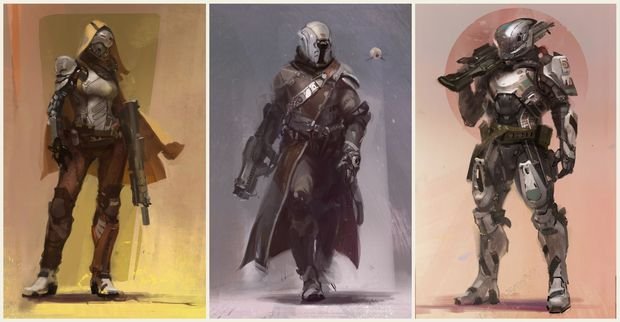 (From left to right, the Hunter, Warlock and Titan playable classes)

You are the last hope of humanity

Players will take on the role of a Guardian, a special soldier that is able to wield some of the radical powers of the Traveler. It’s up to the Guardians to reclaim what was once humanity’s and ensure the survival of everyone.

Guardians are special in that each one will always be unique to the player. This isn’t a case where you’re playing as the one specific hero à la Halo’s Master Chief. Everyone is playing as a unique hero that can be completely customized from clothing, armor, cloaks, and weaponry. Players will be able to select from multiple classes, and for now, Bungie only revealed the Hunter, Warlock, and Titan classes. What makes each class special wasn’t specifically discussed yet other than the Warlock’s magic-like elements. 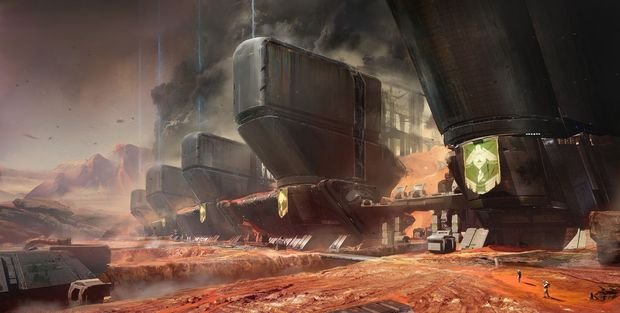 There’s a big emphasis on cooperative play with others, Journey style

Writer and design director Joseph Staten gave us an example of one mission he experienced during his play time that saw him and another player meetup in the last safe city on Earth, which is the one located underneath the Traveler. Players will call this city their home, and can find others in the Overwatch District to mingle and do activities such as gambling, competitive multiplayer — or in this specific instance — meet up with a friend to take on a mission on Mars.

Once on Mars, the duo heads to a place called the Dust Palace to recover an artifact lost at a human establishment buried in sand. Planets will all have different terrains, features — even day and night and weather cycles — and in the case of Mars, it’s one big desert-like place.

Mars is under the occupation of an alien race called the Cabal, which are described as big, armored rhino-like creatures. Other races you’ll come across include spider pirates that rely on heavy rusted machines, time-traveling robots, and evil space zombies. Back to the Cabal, it’s recommended to avoid combat with these creatures when you’re on a small team as they aren’t easy to take down. Joseph and his partner are unfortunately discovered while trying to sneak their way into the Cabal’s territory, and the pair are about to get their asses handed to them.

(A Pike hoverbike on Mars)

Fortunately for them, another player appears on the scene, flying in on her hover bike, and is able to help save the other Guardians. Dust Palace is one of many public areas, and Destiny is constantly matchmaking you with others in the background so you’ll always be crossing paths with other players. So think Journey, but with guns and in space. The trio agree to work together, eventually finding the artifact and a whole bunch of loot, including some exotic weaponry. Joseph and friend thank the third player who saved the day, and she splits off to go back on her own adventure.

There will be at least six-player cooperative play, but beyond that, Bungie wouldn’t say how many more players you’ll be able to group up with, or how many you can see on the screen at once. Cooperative play is a huge part of the experience; the game was built from the ground up with social and cooperative play in mind. In fact, it doesn’t seem like you’ll be able to fight players directly in these areas (so no pulling a DayZ troll here). There will even be an iOS app for Destiny that will let you connect with other players, see important stats and info (available through Bungie.net as well), and be notified when there’s new stuff to do.

While you can play by yourself, focusing on your own journey and completing whatever missions you come across, it’s also an always-online experience. What that means for players that don’t have an internet connection, or a Gold account in the case of the Xbox 360, isn’t exactly clear.

Bungie and Activision didn’t outright say it — and at one point during the presentation, straight up said Destiny isn’t an MMO — yet everything is sounding MMO-like. I believe they are trying to avoid that title since “MMO” derives certain beliefs and constraints that they’re not wanting to trap themselves in. Case in point, there are no plans to charge a subscription fee but I wouldn’t be surprised if there’s a ton of downloadable content for sale. Perhaps a better descriptor would be to think of this as Borderlands meets Journey, at least until we know more. 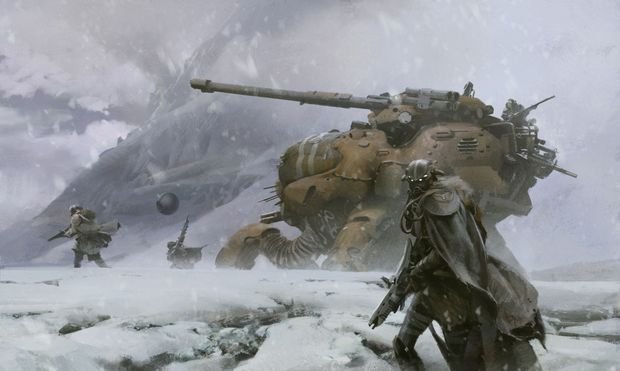 (Spider pirates and their rusted machinery)

Building a cool and unique universe

Destiny has been in the works since 2009 and Bungie focused on several key pillars as the building blocks for the game. The team focused on creating a connected and cooperative world that players want to be in. They wanted to offer up a wide variety of activities that players can do at any time and get a new experience. The studio is attempting to create a world that will suck players in and have them actually caring about what’s going on.

Destiny is also designed to be enjoyable by all skill levels. Bungie knows that there are a ton of people that are tired, impatient, and distracted that don’t want to work hard, read, or go to the Internet “to figure out our bullshit,” in the words of co-founder and project director Jason Jones. The experience will be simple and direct as possible, and they’ve evidently thrown out a bunch of staple and ideals when it comes to the first-person shooter genre. 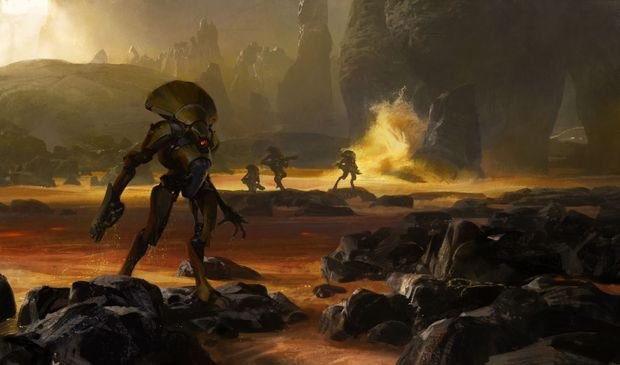 Bungie started fresh in practically every aspect when it came to their game-creating technology. There’s a new graphics engine, a new world editor tool that makes the design process much faster than what they could do with Halo, advanced AI, real-time lighting, and most importantly, a vastly improved networking system.

You’re seamlessly crossing paths with other players in public combat areas, with matchmaking happening all behind-the-scenes. Bungie doesn’t want to take you out of the experience with a user interface or loading screens, so they’re putting a ton of effort to make sure the networking works fluidly. The example I gave before was Journey’s system on a wider scale, or really any MMO, with how you’re coming across other players.

You’ll be going through a persistent world, but what that means in the grand scheme of things is unknown. Is it going to be more MMO-like by choosing servers, or is it going to be similar to EVE Online/DUST 514 with those games’ single-shard server? So many questions, and no real answers — at least not yet. Whatever it will be, it’s a giant and lofty gamble as there are going to be multiple worlds full of players, with stuff happening all the time. 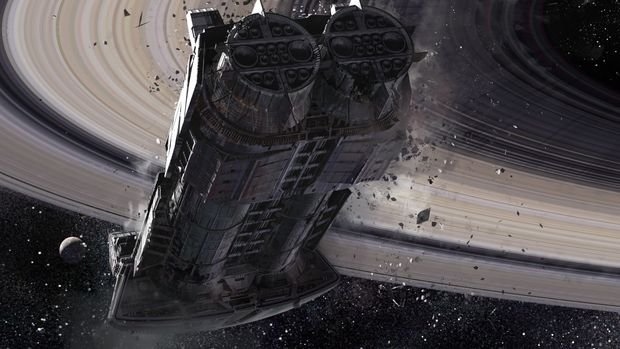 (Derelict spaceship in the rings of Saturn)

Redefining a genre once again

Bungie is considered one of the top dogs in this industry thanks in large part to their rich history, most notably with the Halo franchise. “We did a bunch of ambitious things on Halo deliberately to reach out to people,” Jason Jones told us. “We limited players to two weapons, we gave them recharging health, we automatically saved and restored the game — almost heretical things to first-person shooters at the time … And now nobody plays shooters the way they used to play them before Halo ’cause nobody wants to.”

Towards the end of their run with the Halo franchise, Jason was looking at what was next for the company. “Somewhere in there, I really started thinking about the question … What comes next for Bungie? What comes after Halo? What’s worth doing? You have a studio with this much talent that can do this much, what do you point it at?

“I know for me personally, it was how do you take this genre that we love so much — first-person shooter — and turn it on its head again? If you enjoy first-person shooters, Destiny is going to be the best shooter you’ve ever played. We’ve learned a bunch of lessons from MMOs, and from Facebook games for example, but Destiny is a console shooter. It’s the kind of game we love to play, it’s the kind of game our fans love to play, it’s the game we’re building.”

Ultimately, the Seattle-based studio believes that all games in the future will feature the persistent social aspect they’re so focused on creating with Destiny.

So when’s Destiny coming out?

Based on those leaked court documents during the Activision and West/Zampella trial, Destiny was aiming for a 2013 release. Based on what I saw during my visit at Bungie, it doesn’t seem like it will be hitting until at least next year. Our studio visit took up half a day, and in that time, we were only shown around two minutes of actual gameplay. And even then, it was just the player walking around on the surface of the moon, with no combat shown off.

It certainly looks great, and the stuff Bungie was promising definitely has me intrigued. But there were way more questions raised than answers given, and I’m not completely sure what to make of the game. Some concepts I’m loving, like the fully customizable characters, but it’s all sounding like a very tall order to pull off. Bungie has at least a ten-year plan for Destiny, for the current generation of consoles and beyond, and given their track record with Halo, I want to believe the studio can pull it off.

At least one thing is for sure, the music is sounding pretty solid. Marty O’Donnell is once again in charge of the music, and based on the samples we got to listen to, he and his small team — which also included Paul McCartney — have created some solid space-y music.