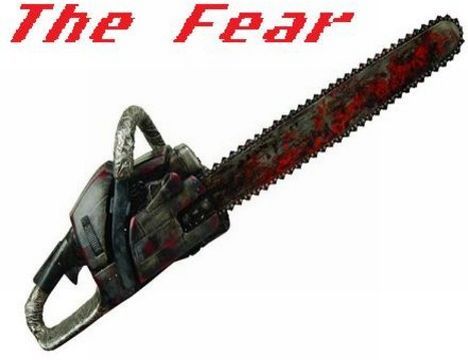 [Editor’s note: pendelton21 tells us his fear of the chainsaw for his Monthly Musing piece. — CTZ]

If you fine folks would indulge me for a moment, turn off anything you’re listening to. Any music, any TV shows, everything; mute ’em all. Alright, now, think about a sound that terrifies you. It could be anything; a horrible ghostly wail, a rusty blade scraping across a wooden floor, Jim Sterling singing Rhianna. Think about that one sound effect that, as soon as you hear it, makes you feel uneasy or restless; a sound that shakes you to your soul.

For me, that sound is this. The sound of a small motor revving up, a blade horribly grinding, flesh and bone being torn apart. Above any other sound, I am deeply terrified of the chainsaw. Whenever I hear a leaf blower, a chill goes up my spine. Walking through Lowes makes me hyperventilate a bit. I can’t even watch that History Channel show about loggers. Is this because of a horrible gardening accident I witnessed, or watching Texas Chainsaw Massacre in the dark when I was a kid?

No, it’s because of the scariest moments I’ve ever experienced in gaming.

Now, normally, chainsaws are fun. Honestly, what weapon in gaming is more entertaining to use than this piece of lumberjack equipment? Doom gave us the first use of the chainsaw, and kicked up the power in Doom 64 by giving us a double-bladed chainsaw, perfect for tearing all sorts of demons apart. Gears of War’s Lancer is just a wonderful weapon for plowing straight through the face of a close-up Locust. Hell, even FF3’s Edgar has an amazing chainsaw weapon I used rather frequently.

While all of these are a blast to use, once you’re on the other side of the blade, the chainsaw becomes an instrument of nightmares. At least, that’s what happened to me. Let me share with you a few moments of chainsaw-fueled terror from my past.

As I’ve talked about at length in a previous blog, childhood terror was, for me, defined as the chainsaw monsters from Zombies Ate My Neighbors. Most of the game was fun, from saving your neighbors and killing zombies with squirt guns, to drinking potions that made you into a giant purple monstrosity. But, every time I heard that damn chainsaw sound effect, I froze up, knowing the terror that was coming my way. The undeniable evil that nothing could stop. The chainsaw maniacs were after me, and there was nothing I could do but run. Everything you put in the chainsaw’s way, from hedges, to doors, and even concrete walls, was dismantled as if they were paper. The chainsaw ate them up. Only after I had saved the final neighbor for that level, and crossed through the exit door, did I feel some form of security from those horrible beasts.

Though I eventually grew out of my fear of those Jason-wannabes, my fear was multiplied twofold years later, when I first met Dr. Salvador. If that name escapes you, maybe this picture will enlighten you:

Yeah, the chainsaw monster from Resident Evil 4. The evil, hulking, Spanish-screaming psycho who made me (and probably some of you) afraid to go to bed at night. I vividly remember the first time I grew to fear him; about three hours into RE4, I exited a house where I (as Leon Kennedy) was violently thrown about by Bitores Mendez, and then had to fend off a few Ganados on the first floor. I found the back door exit of the house, and proceeded to go outside. After turning a corner, I heard the familiar sounds of the hand-held mechanical Hellbeast that crazy Spaniard wielded. Then I saw him; he charged right at me, with that damn sack over his face, wildly swinging the instrument of terror about. Following basic logic, I aimed my pistol at his head, and popped off 2 shots right in his dome. That did nothing; he was still charging. So, I shot him again, and again, and again. He stumbled once, then came roaring back. As I got off my final shot, I thought, “Ok, I’m gonna get hit, but I’ll survive. Thank God I have full life.” Dr. Salvador saw it differently:

I had to sit there, while the chainsaw buried its way into Leon’s neck, tore through his spine, and popped his head off like it was a grape on a vine. The near-surgical precision of a FUCKING GARDENING TOOL shocked me like nothing I’d ever seen. When the screen read “You Are Dead”, I put my controller down, and just stared at the TV for a minute, shaking. I was visibly distraught over how cleanly that chainsaw killed me; I’d never seen anything like it. Not only did it remind me of the trauma ZAMN caused me as a kid, but it showed me, to date, the most vicious death of a character I was controlling I had ever seen.

I stopped playing RE4 for a few days, only to come back and finish it in one sitting, jumping every time I heared that familiar sound. And every time I saw the good doctor, he got progressively harder. Things only got worse when I played the Mercenaries mini-game, only to find a roided-up, double-blade-chainsaw-wielding Salvador waiting to turn my pants a lovely shade of brown. To this day, the chainsaw has terrified me like no other item in videogames ever could, and I don’t think that anything ever will.