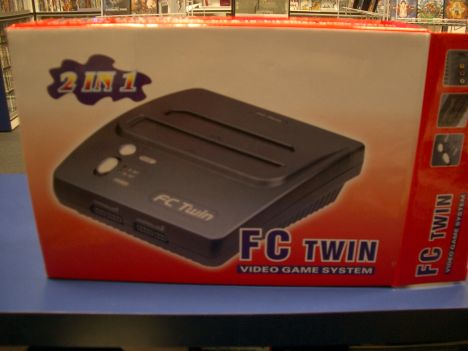 I felt like such a noob today. I thought I had seen everything there ever was when it comes to video games. I have always proudly proclaimed that I have had every single video game system cross my hands at one point or another (not including all of those ridiculous amount of Game & Watch games). Today though, I was slapped across the face with reality. Kinda like how a pimp slaps his ho for holding out on him. A customer came in today with the FC Twin game console seen above. At first I thought this was one of those third party NES systems that have popped up all over the place. But then I realized that this is a very sw33t hybrid. It will play all original Nintendo and Super Nintendo games.

I did some digging, and found that Video Game Central, is one of the few major places that sells the unit. $60 is a really great deal. Especially taking into account that SNES sell at my store for $60 (hey, they have become extremely rare all of a sudden and people will pay that much easily to own the best system evar). I suggest that if you’ve been looking for a NES or SNES for awhile now that you go ahead and purchase this Twin console immediately. I’ll go into why you should own it right this instant in a bit. First I want to give you guys a description of what it’s like.

The system actually feels well built. It feels pretty solid yet very light too. The size of the system is just a little bigger than the second generation Super Nintendo. There are two ports on top, one for each cartridge style obviously. The power button has three modes which are off, 16-Bit and 8-Bit. The one draw back to the system though is that you’ll never be able to play Duck Hunt.   The controller ports only support SNES adapters. At least you still got all of those great Super Scope games. It also comes with two controllers, which feel very good and are almost identical to the original SNES controllers.

Now here’s why you should try to pick this up immediately. As far as I know, The FC Twin console is illegal.  We all know that the patent expired on the regular NES over a year ago and third party NESes have flooded the market. But the SNES patent still belongs to Nintendo. So once Nintendo catches wind of this, the Hammer Bros are going to decimate this company. Who’s the company you ask? I haven’t the foggiest. I thought it was Yobo (the style of the box looks like Yobos version of the NES) but there is nothing on the box or the system that indicates who made it. Further more, it doesn’t even say where this was made in. Which I’m sure is another violation of some law right there.

I highly suggest to anyone that has been wanting one or the other systems to get this. It may not be around for long. Or you could always just wait to get all of those old school games on the Virtual Console, Live Arcade or PSOne store.