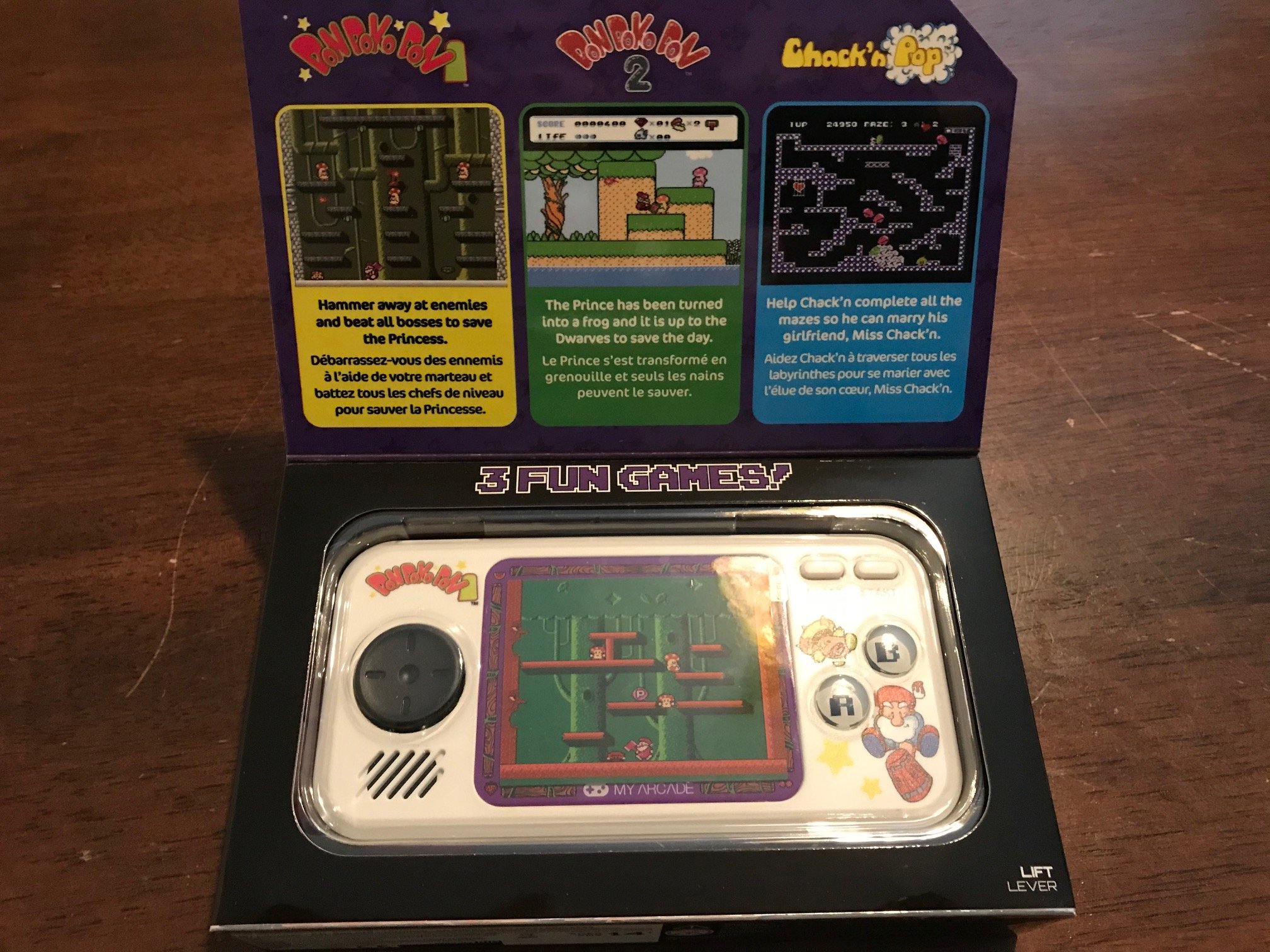 Portable gaming is one of my biggest sub-hobbies in this massive sea of an industry. There’s something about grabbing a box and playing it wherever you want that just feels so freeing: an instant omnipresent state of nirvana.

While my portable collection is mostly comprised of dedicated gaming handhelds, every so often a specialty device will come across my desk that’s worth taking a look at. The Don Doko Don Pocket Player is super niche, but grants access to three rather obscure Japanese games that are worth remembering: so long as you have the stomach for the retro era.

So what is it? Well, basically it’s another entry in My Arcade’s line of “Pocket Players.” Joining the ranks of Bubble Bobble, Dig Dug, Galaga, Ms. Pac-Man and Pac-Man, the Don Doko Don edition sports three games: one of which is not actually a Don joint (par for the course, as several of the devices have two on-brand series games and one adjacent third).

For this player, it’s Don Doko Don (an arcade platformer similar to Bubble Bobble), Don Doko Don 2 (a wildly different scrolling platformer) and Chack’N Pop (an arcade platformer that’s kind of like Donkey Kong Jr.). All of them are Taito productions, but you could have guessed that given the aesthetic and mechanical similarities to Bubble Bobble (Chack’n Pop could have even been the progenitor for the more popular Bub and Bob-helmed franchise).

The former is probably the easiest to pick up and play, given its swift level-by-level format. You have a bunch of monsters on a single screen to bash with your hammer: you bash them good, then you move on to the next board. The arcade qualifier above really is apt, as it originally debuted in arcades in 1989 before moving to the NES and PC Engine. Although this player lacks a two-player option, it’s a fun enough game to put on during a rainy day afternoon and try to speedrun or complete without getting hit: though I wouldn’t necessarily recommend it as a “must play.”

Don Doko Don 2 takes a radically different approach and shifts the series into a sidescrolling platformer motif, with colorful, goofy worlds to plow through. It’s a very simplistic two-button game (jump, hammer whack) with a very simple setup (rescue the princess), but it works. It’s kind of a shame it never came west, since it probably would have been part of my rotation along with games like Adventure Island. Like its predecessor, it’s not going to sell the Pocket Player on its own, but it’s a nice treat for anyone who missed out on some more obscure Taito releases.

Chack’n Pop on the other hand is something I’d like to come back to regularly. This is the oddball of the trio: taking the players on a quest to help Chack’n marry his girlfriend. Chack’n kind of rules, as he’s sort of a yellow chicken thing that can extend his legs to reach ceilings. Your job is to utilize bombs (one of the many weird elements of this very old 1983 game) to blow up cages with hearts in them, which open up each level’s exit. Along the way you’ll have to avoid enemies (many of which went on to star in Bubble Bobble) and race against time.

It sounds a bit hyperbolic to recommend a $35 portable player just for Chack’n Pop, but I think a lot of people missed out on it and this is some way of helping it get its due. At one point Taito was pumping out endless classics, and this kind of got lost in the fray before several other franchises would step in and carry the torch. With clever level design and a completely wholesome premise, it deserves to be honored.

So let’s talk about the player itself for a second. It’s very simplistic, with a two-button setup and a single d-pad. Although it may look like it sports both start and select buttons, the latter is actually a quit/game select trigger, with no confirmation whatsoever. If you hit it and you’re knee deep in a late level: too bad, you’re starting over. The four required AAA batteries (not included) is also a bummer for full portable play, but there is an option to insert a micro-USB cable (also not included) if you want to chuck the batteries.

That’s pretty much it. There’s zero bells and whistles, the d-pad and buttons feel sturdy and all three games are selected from a rudimentary menu upon boot up. This device is very much about the games themselves and almost nothing else. If that excites you as a collector, an old fan of any of these three games, or someone who missed out on the entire ’80s era of arcade action, it’s not a bad pickup. Me? I’m just glad I have a dedicated Chack’n player.

[A copy of the hardware was provided by the manufacturer for this assessment.]