Ready or not (hopefully more on the ready side) Tom Clancy’s The Division is slated to release March 8, 2016. The weekend beta has already started up on the Xbox One yesterday and has just went live for the PC and PS4 as of 4 AM Pacific Time today.

Its a closed beta, so if you didn’t receive a key in the past few days and you missed out on the Nvidia giveaway yesterday — your options now are to overpay for the beta key on eBay/key marketplace… or yep, pre-order the gorram game.

For those that actually have made the decision to buy the game (beta or not), we’ve found some pre-order deals on The Division with beta access (re: authorized retailers). The discounts aren’t too shabby either, you can save almost 29% off thanks to currency conversion magic.

Along with the closed beta access, you’ll get the Hazmat Gear Set pre-order bonus. The set includes a Hazmat outfit, Hazmat Go-Bag with increased health skills, and a POF P416 Assault Rifle (whatever the F that means). 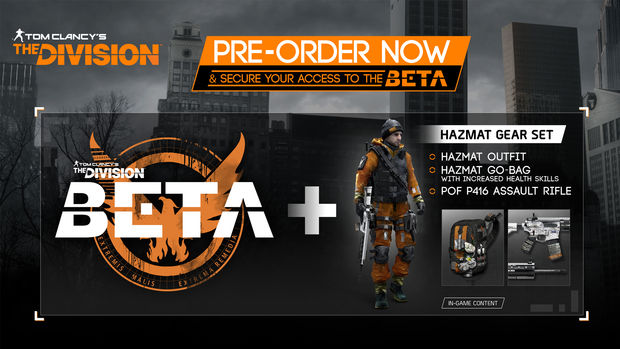 In terms of USD, due to currency conversion, the discount is at about 29% for both Standard and Gold (with Funstock more expensive than GamesPlanet on the Gold Edition). Note that the final price depends on your bank/credit card’s currency conversion rate of the day.

Along with the aforementioned Season Pass, the Gold Edition will also include an exclusive National Guard Gear Set, which bundles in a National Guard Outfit, Go Bag with increased Armor perk, and a P416 Assault Rifle (isn’t that the same thing as above?). Suffice to say if you’re going Gold Edition, the Season Pass contents are probably what you’re aiming for.