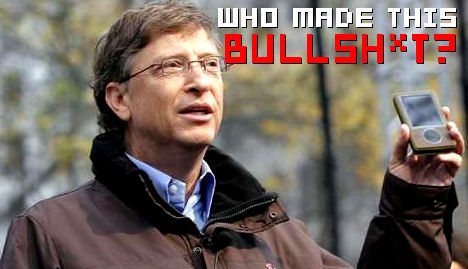 This is not strictly videogame-related, but it’s such an incredibly freaky story that I’m sure you’ll all forgive a rather tenuous link. Unbelievable reports have come in claiming that every single 30GB Zune in the world spontaneously died at 2AM this morning and now refuses to work.

According to the reports, the Zunes reset, powered back up and proceeded to freeze on the loading bar screen at roughly the same time. At the moment, no conventional means of resetting has worked. Due to the bizarre simultaneous nature of the crash, a number of people are now referring to the event as Y2K9.

This is incredible, and can’t be good for a company that brought us the infamous red ring of death. Quite how Microsoft is going to live this one down after producing a terminally ill videogame console is beyond me. Just to test this problem, our very own Brad Nicholson called his girlfriend, who owns a Zune. Sure enough, it’s broken.

Rest assured, I’m laughing my arse off as I type this. It’s probably the craziest story we’ve had in 2008, and right on the last day of the year, too. Thank you, Microsoft: your commitment to quality hardware never ceases to produce pure gold.

[Update: According to Major Nelson, they fixed the issue a very short moment ago. His Zune wasn’t working, either, but magically fixed itself. Tech support had no clue of a fix when we asked them about it, though. Whatever happened might have happened of its own ghostly accord. Weird, weird stuff.]

[Update Update: Okay, now we’re hearing it’s NOT fixed. HAHA! This is the gift that keeps on giving. Apparently, the issue has something to do with the new firmware being unable to handle today’s “leap second,” where one extra second is added onto the day. Or something.]