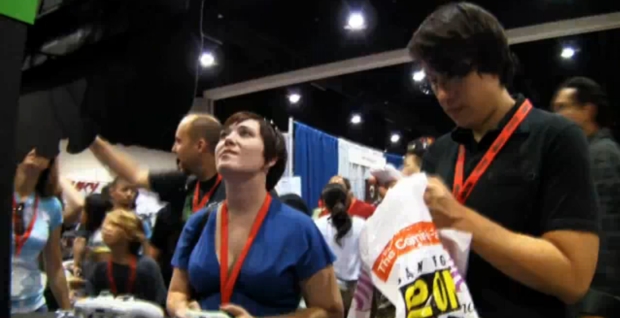 This screen grab from our interview with The Behemoth shows off Dale perfectly. He’s so busy being important on his phone. Most likely Twittering about how much he hates something at the moment. That’s our Dale North!

Destructoid has invaded San Diego Comic-Con, Papa Burch is like a Big Boss, Holmes reviewed Little King’s Story, a Halo anime is on the way and plenty more happened on 07/23/09.

A closer look at the BioShock 2 room

We chat with The Behemoth on ‘Game 3’

Check out The Behemoth’s ‘Game #3’

See and (sort of) play RE: The Darkside Chronicles

New screens, art and video from Tatsunoko Vs Capcom

Army of Two: The 40th Day has morals and sh*t, bro

New Singularity screens have plenty of gore and ghouls

From the Console to the TV Station: Part 3

What you can buy for your Avatar, and how much it’ll cost

I, the Author: Regret and redemption in the Wasteland

Forum of the day: The Secret of Monkey Island SE

Wut? Warner Bros. announce Where the Wild Things Are game

So, they’re doing a Halo anime

Guerrilla steps back from Killzone 2 as new maps launch

Records are broken: A lot of people bought Battlefield 1943

IL-2 Sturmovik: Birds of Prey gets a release date

Ubisoft boss is skeptical about Beyond Good & Evil 2

You are going to love this new Borderlands trailer