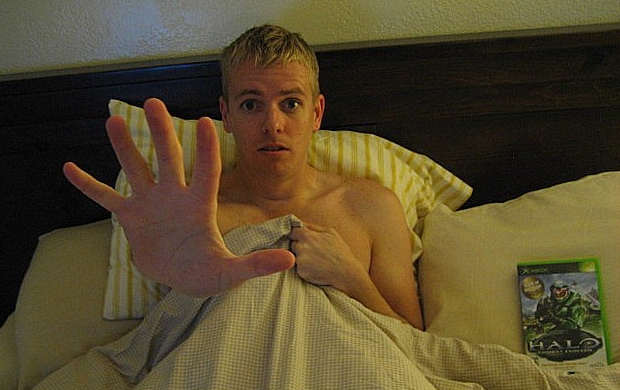 Chad played Halo for the first time finally. He didn’t seem to like it that much. Probably because he sucks at awesome videogames.

Dyson found out that nauseous feeling is intentional in Dark Void, we’re giving away some Gunnar Optiks, the Left 4 Dead 2 boycott is over, GT 5 could have been released at any point, Madden NFL Arcade was announced and more pew pew pew happened on 10/14/09.

Could user-created RunMan: RATW levels be on the horizon?

Podtoid 120: You just suck at games

A Halo virgin does it for the first time

Nothing is Sacred: ‘It looks like the lock is broken. I can’t open it’

Forum of the day: Looking forward to any neo-retro games?

Win a free pair of gaming specs from Gunnar Optiks!

Party with Claptrap at the Borderlands Extravasplosion

Persona 3 Portable allows you to go back to Inaba

Water Sports coming to the Wii

There might be AMD chips in your next Xbox

GT5 producer: ‘We could release it any time we want’

Duels of the Planeswalker expansion hitting next week

Sign-ups for the Xbox LIVE update preview program are GO!