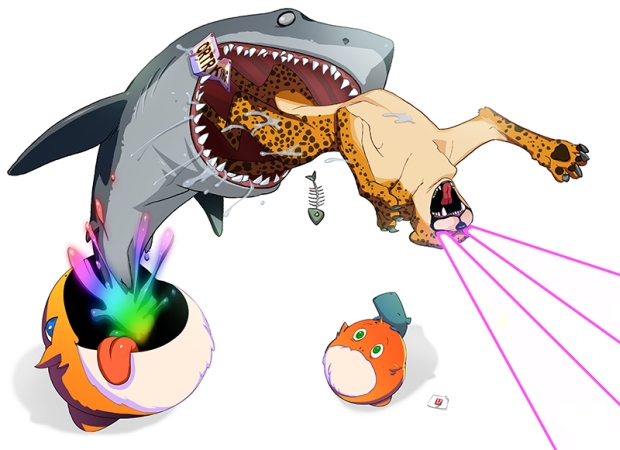 Our Critter Crunch contest got more awesomer thanks to the custom artwork that the team made above. One lucky winner will be getting a print of the crazy image you see. Now go barf!

Chad is afraid of Phanto, we reviewed JU-ON: The Grudge, I brought you a preview of Dementium II, the Modern Warfare 2 video from yesterday is indeed in the game, G4 has a ton of Left 4 Dead 2 content up and plenty more happened on 10/28/09.

Phanto: The scariest videogame character of all time

Nothing is sacred: Come with me if you want to live

Forum of the day: Anthony Burch is a jerk (it’s funny, calm down)

Going to Hell and back in Dementium II

You know you want it: CSI: Deadly Intent demo now on XBLM

No dedicated servers in Aliens vs. Predator, it seems

Kojima issues followup post on Zone of the Enders 3

Darksiders 2 being discussed, may have multiplayer

Sorry Canada, no Half-Minute Hero for you

‘Undead yourself’ in PlayStation Home for fame and profit

A ‘very big surprise’ is coming to Champions in 2010

Rez on the PSP? Q Entertainment brought it up!

Warhammer 40k: Space Marine on PC? Don’t rule it out

Final Fantasy XIII to get a reveal presentation?

Watch an Alien and a Predator play Rock Band together

Frogger is totally returning to PSN, WiiWare this fall

Here, have a buttload of Darius Burst PSP screens

See for yourself: Bon Jovi in Final Fantasy commercials

One last trailer for GTA: The Ballad of Gay Tony