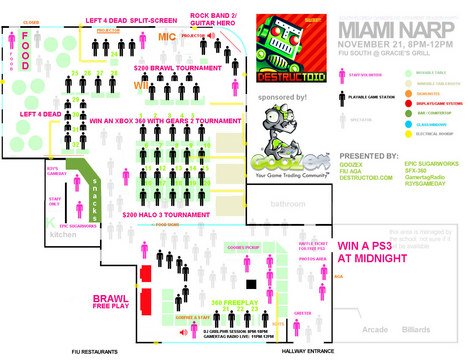 Time to party Florida! Next week, Destructoid is holding a huge Miami NARP at the Florida International University. The event is free and we’re going to have several tournaments going on with some nice prizes. Check out the announcement post for more details.

Anthony talks to the creator of Gish, Dale gets nerdy with the producer off KORG DS-10, we need your help picking winners for the Blitz II contest, someone’s already reached the level 80 cap in WoW, and plenty more happened on 11/14/08.

Contests:
Tonight. Midnight. Three people win money and a chance to murder Reaprar
BTL II/PS3 contest voting: we can’t decide, so you must!

Rumortoid:
More proof of LittleBigPlanet for your PSP?

Videos:
My World My Way, the RPG with life lessons for little girls
Necrovision is not a WWII shooter
Street Fighter IV dated in the US, also Gouken
Latest Mines of Moria developer diary all about being faithful