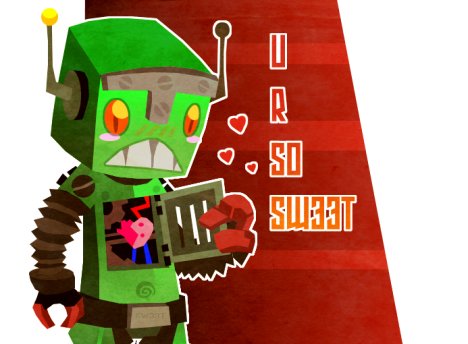 Everybody loves Destructoid and your loved one will love you even more if you give her the Destructoid Valentine’s Day card. They may even finally let you do that “thing” you’ve been wanting to always do with them. Bow chicka bow wow.

Perfect games for the one you stalk

Forum of the day: Favorite HAWP

Too much vision: Stop concerning yourself with game potential

Nintendo reaffirms their overwhelming supremacy, in case you hadn’t noticed

Microsoft opening up its own retail chain

Fallout 3’s next DLC pack, The Pitt, will let you become a slave

SFIV controllers will be hard to get, even if you pre-ordered

I’M A COMPUTA: G.I. Joe game to include the original PSAs

Check it out playas! You be ballin with 10k Mario

The making of the Necromancer and Frost King from Castle Crashers

Altman be praised: Here’s what Dead Space looked like for the original Xbox