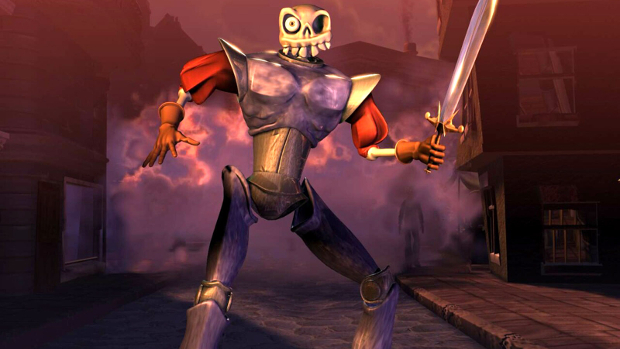 If I have one bone to pick with Sony, it’s that I’ve been waiting over a decade for MediEvil 3. I half-heartedly joked Sir Daniel Fortesque’s appearance in PlayStation: All Stars Battle Royale could lend the hilarious, endearing series an arm in finally getting the sequel it deserves. With the announcement that Bluepoint is bringing a Sony classic to current hardware, my heart is a flutter. I’d commit all kinds of skullduggery to make it true, though there are obviously a lot of games ripe to be brought back from the dead. None so charming and valiant, though.

Today, Chris Carter delivered a quick guide to the excellent Dragon’s Crown, we launched a contest to get Dragon’s Crown and a bunch of extras, Hidden Path unveiled the new, amazing-looking Windborne, we had some Tales cosplay for you to peep, Hamza hunted sharks in an Assassin’s Creed preview, and more!

PAX:
Catapult for Hire sends its jetpack bunnies to PAX

News:
Easy mode update for Mega Man Unlimited is out
Turtle Beach acquires Parametric Sound Corporation
XSEED registers domain linked with Senran Kagura series
It’ll probably be five years before Street Fighter V
Xbox One records games in 720p at 30 frames per second
Bluepoint is bringing a ‘Sony classic’ to current-gen
The next Nintendo Direct is happening tomorrow
What the? There’s a Pilotwings stage in Smash Bros.?
Peek into the development of Final Fantasy VI
‘No one is doing what we’re doing,’ says thatgamecompany
Japan Expo to host Ace Attorney art director
Krater, Dark Souls, and Defiance are your daily deals
XSEED to release Senran Kagura Burst in North America
Square Enix reduces losses but still in the red