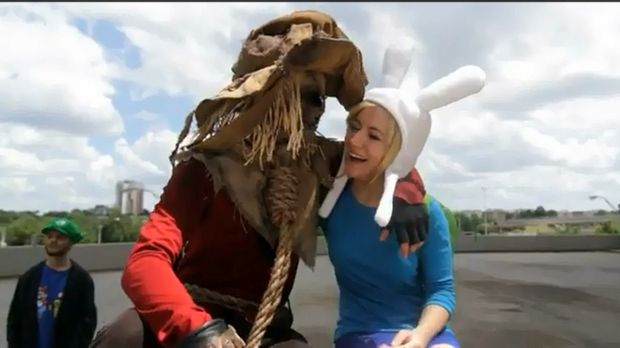 Mad ups to superb cosplay. Maybe one day I’ll have time to sew that sexy Snorlax idea I sketched out years ago. So hard to find just the right color, though. Also I’d have to get back into shape because yuck.

Today, Dr. Sophie “Strangelove” Prell wrote about tabletop RPGs, community member locketheleisz shared a remembrance of his hero, Nintendo’s Gunpei Yokoi, Jim reviewed the trippy Hell Yeah!, Square Enix announced plans to release some Final Fantasy XII music, which I foolishly hope is being done in lead up of an announcement of an HD release of XII, possibly my favorite in the series, and more!

How I learned to stop worrying and love the tabletop RPG

Monster Hunter 4 is a fast and ferocious beast

Some Final Fantasy XII lovin’ is coming in November

Platinum: There are terrible Japanese AND Western devs

Big news from GOG.com and CD Projekt on October 18

McPixel is the first Greenlight title to debut on Steam

Not a baby’s toy! NES Zapper turned into a lethal laser

OC ReMix’s FF6 Kickstarter brought back from the grave

Gamemaster Howard wants you to be a ‘Know-It-All’