No grinding, no shopping, no minions, just fighting

My first thoughts upon seeing Battlerite‘s Steam page was “This looks like yet another boring and doomed-to-fail League of Legends clone,” which I’m sure would be the reaction of most people who haven’t played the game.

Let me tell you just how wrong I was. Upon being shot a key by the developer and installing the game, I found myself playing for hours straight. As a recovering LoL addict, that both scared and excited me. Battlerite is damned good — and not just as a Steam Early Access game. It takes all the parts I loved about LoL and leaves out all the things I hated. 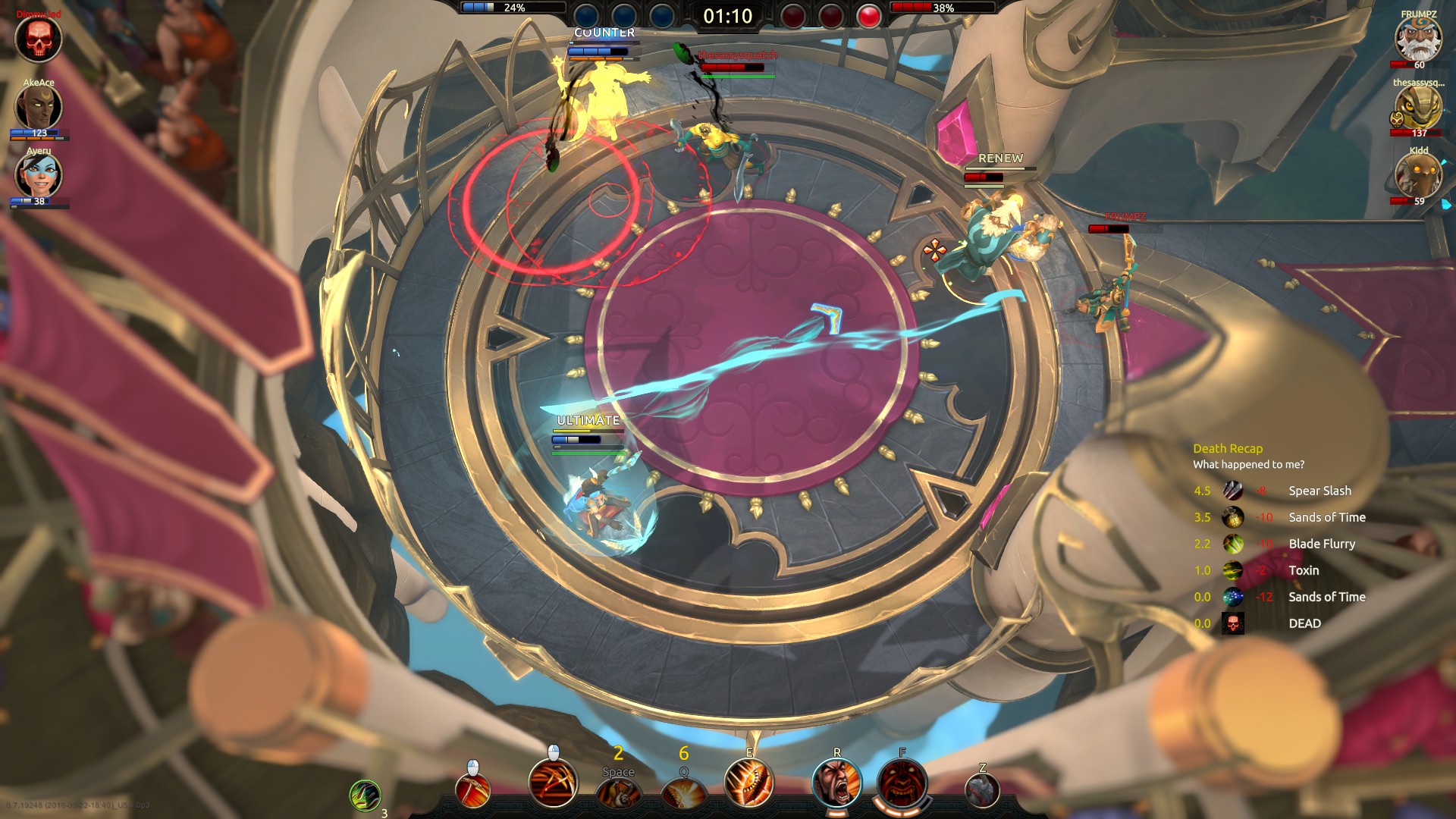 While Battlerite is a MOBA by the definition, it forgoes a lot of the traditional elements to just get straight to the action. Matches take place between two teams of two or three, with the latter being ranked. The goal of each match is to eliminate the other team in one of the various small arenas. The first team to do so three times wins.

Matches take place at breakneck speeds as there is no grinding, jungling, shopping, or minions to speak of. You simply select one of three predetermined ‘Battlerites’ per round that act as buffs to your various abilities, then get straight to battle. Rounds have a two-minute timer, at which point the playing field shrinks to a small circle in the center, forcing you to confront your opponents or die from being outside the battlefield. Most matches are done in under 10 minutes total, which is a nice change of pace considering I’ve had matches of LoL or Smite last well over an hour.

Before queuing up for a match, you select the character you’d like to play as. Characters can be a mix of three roles (melee, ranged, or support), though each is labeled with their intended role. Thankfully, Battlerite‘s matchmaking takes out the whole arguing over who gets to play what character and what role, as it automatically matches you with teammates that fill the roles you didn’t choose. Easily the best stress-free matchmaking I’ve ever seen in a MOBA. 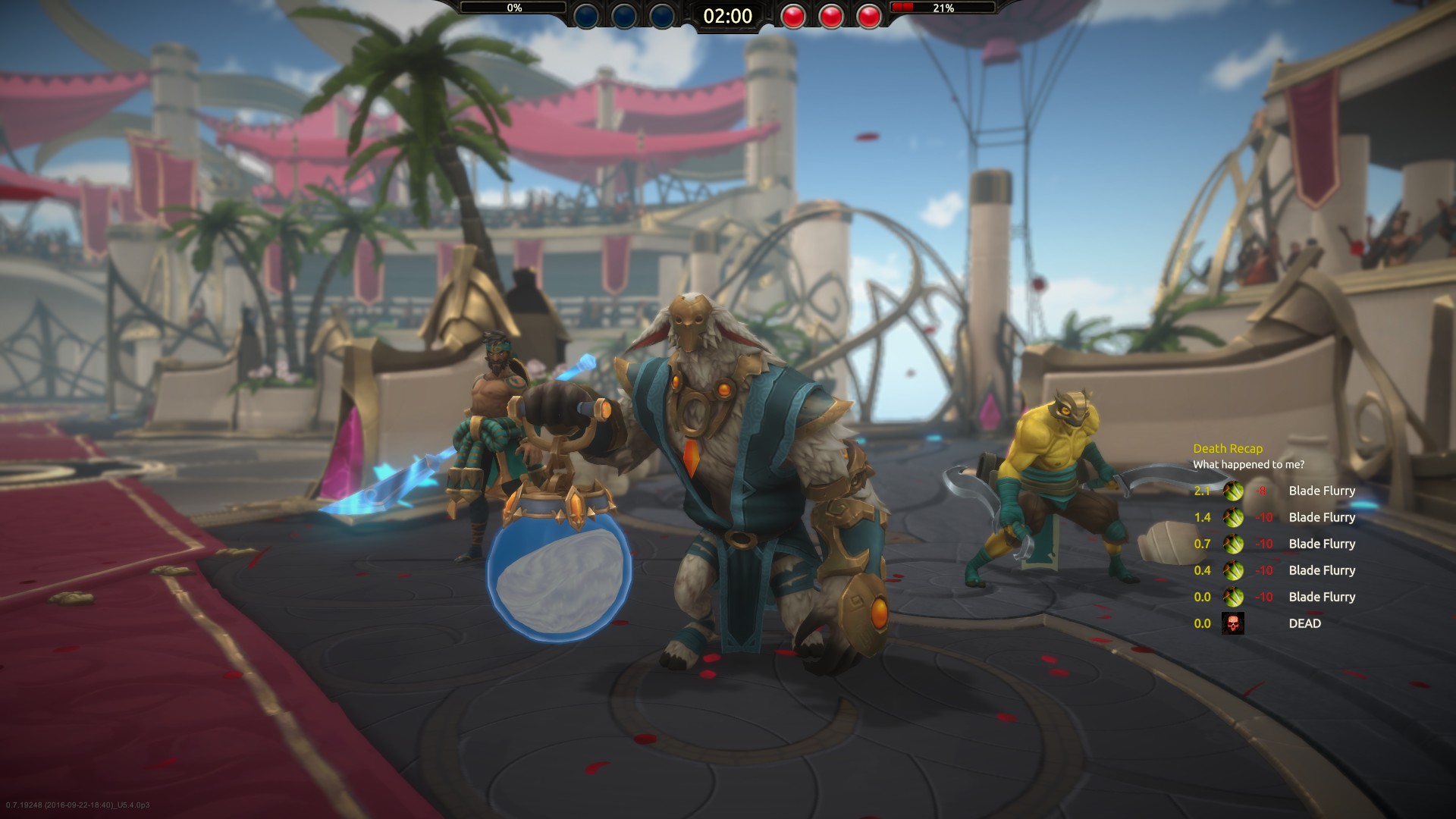 The combat will feel familiar to anyone who has ever played LoL or any other MOBA. Movement is mapped to WASD keys, while abilities are on both clicks, and the QERF and space keys. Simple enough. Most characters right-click is their more powerful ranged attack, while left click can be either ranged or melee depending on the character. Many characters have similar abilities mapped to the same keys, such as supports’ right-click being a heal, while others have a dodge or jump that allows them to get over barriers mapped to their space, and many have a Q ability that does a counter. One major difference is the short cooldown times and lack of some kind of ability or magic power needed to use abilities, meaning you’re constantly in the fight using more than just your basic attacks. The combat doesn’t exactly reinvent the wheel, but it doesn’t have to — it feels like constant fast-paced, intense team fights you’d find in any other MOBA, which is always the best part to play or watch as a spectator.

Currently, there are 15 characters available, all of which are unlocked from the start, as well as future characters for those who buy the $20 game while it is in Early Access. Once it is ready for prime time and has a full proper release, the game will be free-to-play with an option to earn characters or a to-be-determined price to buy them. There are unlockable skins for characters, their weapons, and mounts which can be earned via gameplay or purchased via microtransactions. Earning chests that grant you three items and currency to buy them is easy enough just by playing, and while there are two different currencies in the game, you can actually earn both of them, which is a nice change from other MOBAs. Most of the cosmetics are simply pallet swaps at this point, so I haven’t felt the urge to drop any extra money just yet.

Battlerite isn’t perfect by any means. I’ve run into some issues with matchmaking failing to connect, and a sound distortion bug (the devs are aware of this and working on it). There is also currently no way to play matchmade battles against real opponents without it being ranked, meaning some of the competitive players will certainly be annoyed by being stuck with those just looking to play for fun. Also, the graphics are quite similar to League of Legends, the character designs leave a bit to be desired, and the voice acting for characters seems amateur at best, with many of the them seemingly making references to other games. Yay overused memes… 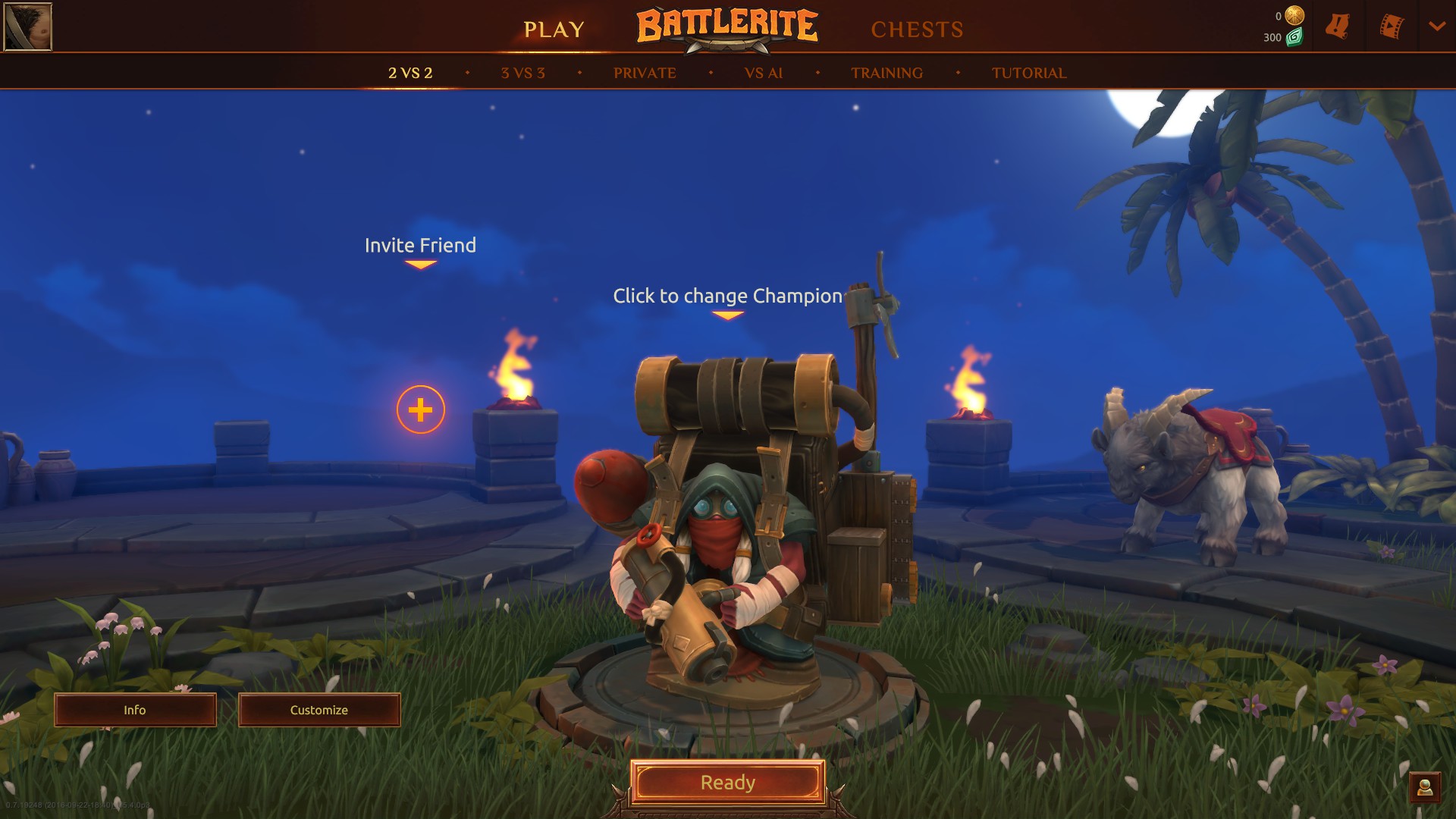 The toxicity that drove me away from basically every other MOBA hasn’t taken hold quite yet as I have only been called a “fag” and told to kill myself once each, but that is most likely because you have to pay to play the game currently. There isn’t a language filter for the chat, though you do have to type “/enablechat” one time to enable it across all games. Chat is kind of necessary for anyone looking to play competitively, and from what I can tell, there isn’t a way to block “all chat” or from seeing messages sent by the other team to antagonize, berate, or insult you.

If you’re like me and you don’t have time for lengthy MOBA matches, hate minion grinding, and all the math involved with shopping for items, this is the game for you. Even in Early Access, I absolutely love Battlerite (even more so than Gigantic, which gave me a boner). I’m considering picking up the $30 ultimate fan pack that grants 10% more XP for everyone in your matches, a special mount, golden chat text, a special icon, and five chests. If you play or end up purchasing the game, feel free to add ‘DimmuJed’ if you want me to carry you as a tiny old woman with a shotgun, minigun, and rockets (or just feed the other team depending on how good they are).

[These impressions are based on a Steam Early Access build of the game provided by the publisher.]