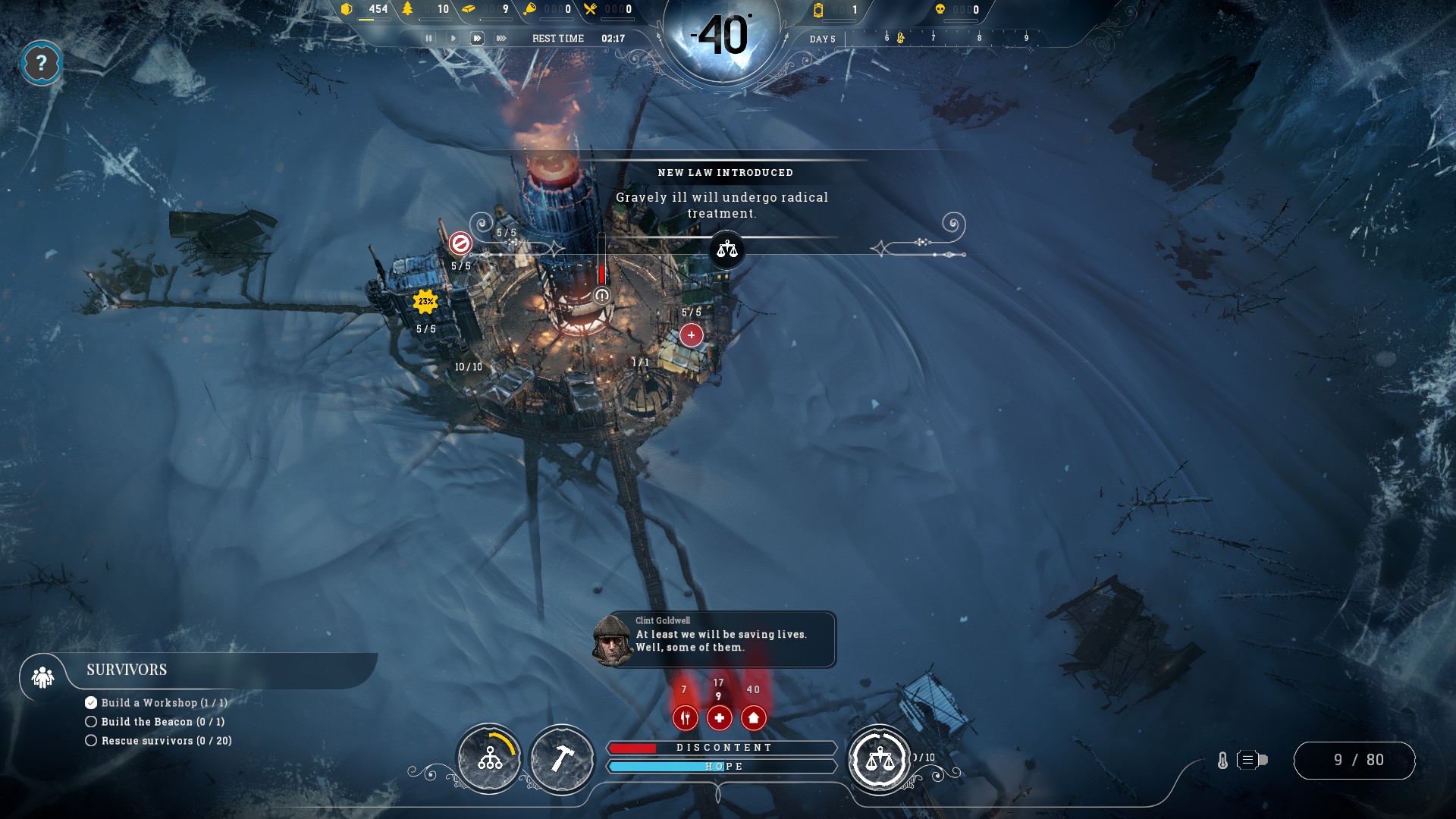 Please sir, can I have some more?

On the very first day, on my very first decision, I sent the children to work. “It’s only the ‘safe’ jobs” I told myself – the cookhouses, to prepare food. The gathering piles, to pick up bits of coal, wood, and steel. “It’s for the greater good” I told myself.

Less than a day later, I enacted a law watering down people’s filling meals into a thin, watery gruel. The people wouldn’t be well-fed, but they would have food. “It’s for the greater good” I told them all.

How far are you willing to go to ensure the survival of your people? How far is too far? What will be left of you, and those around you, when it’s all said and done? These are the questions Frostpunk demands of us. Demanded of me.

My people would survive this experience, but I’m not sure they lived. 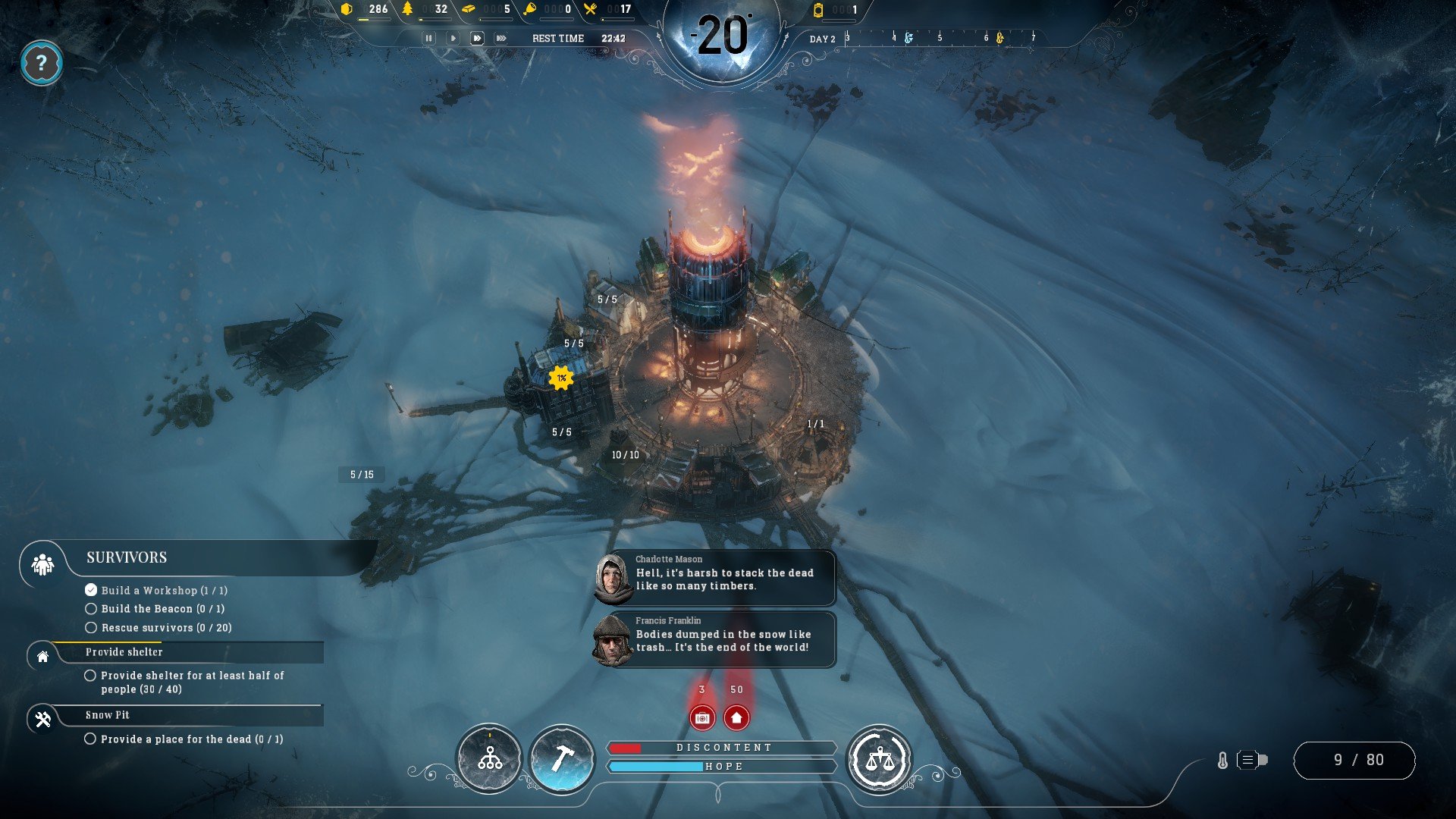 Frostpunk, the new title by sadness enthusiasts 11 bit studios, is obviously much more than just a city builder, and certainly not the happy solarpunk future I was constructing just yesterday. Building off of the depression-fueled scavenge-fest that was This War of Mine, Frostpunk places you into an alternate-history England where a massive ice age has swept the land. Humanity was forewarned, and tried to prepare with massive “Generator Cities”… but for whatever reason (probably “humans are dicks”), the plan failed. A small band stumbled across one of these Generators, and that’s where the game begins.

With my workforce diversified between generic worker-bees, specialists, and now children, my people set out, carving little drifts through the snow to reach the game’s main resources: wood and steel for buildings and research, and coal, for the almighty Generator. I build a hunter’s hut to gather food, and a workshop, in order to reclaim lost technology. As night falls, I fire up the Generator, flames shooting into the sky like it’s going to demand the One Ring. A nice big circle proclaims that I have less than twenty-four hours of coal stockpiled.

That night, the first of my people become ill. Already saddened by my child-labor and food laws (Not that there’s any food!), the people band together and demand shelter. “Be careful what promises you make,” the game cautions. I promise to house half the population instead of all of them, but I do so in sturdier bunkhouses – I remember This War of Mine, and I know I have it easy so far, seeing the temperature is set to fall in a few days.

A medical shelter is built, interrupting everyone’s rest. Possibly due to a bug in the demo, any construction assigned will be immediately carried out. Those that are sick will continue to work, and get sicker, unless treated – in which case, you’ll be out both the workers and those set to treat them. Just to the buildings alone, I lose a third of my resource gatherers. While I meet the housing crisis, hope is still critically low. There’s only one option. 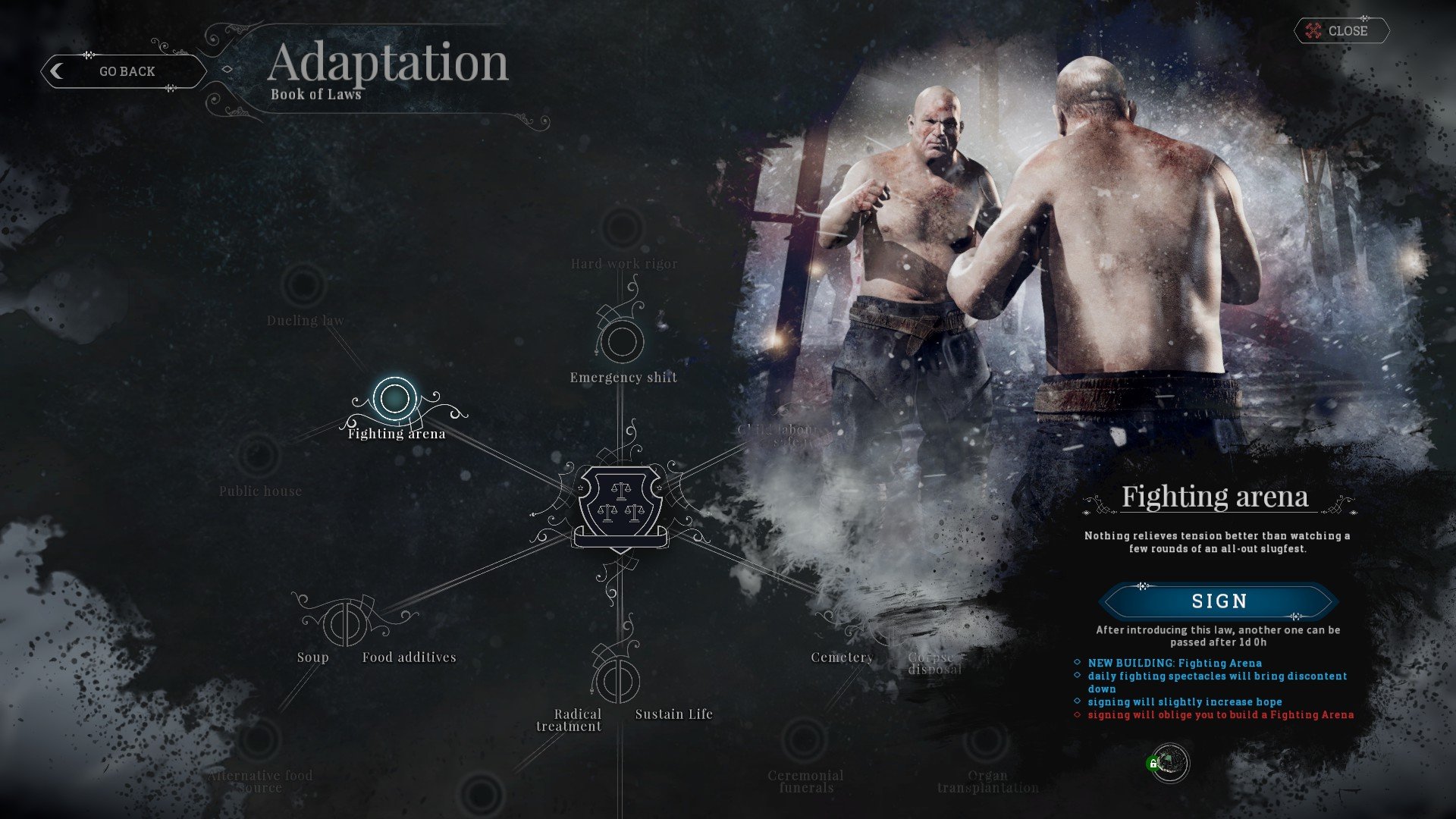 It’s time to build a fighting pit and enact duels to the death. Two Men Enter, One Man Leaves. They eat it up faster than the pathetic gruel I never have enough of. Especially the children. You can see them cling to the sides of the cage in the night.

Decisions continue to be made. Instead of burial, I throw the dead into a pit in the snow. This depresses the hell out of everyone, but is healthier, and leads to my next decisions – in case of death, the dead shall be used as organ donors for the living, but that the gravely ill will be met with experimental procedures to heal them more quickly (including amputation).

It all goes to hell on Day four, when the temperature drops.

It doesn’t just drop, it’s twice as cold. By the end of day four, fifteen of my eighty citizens are sick, and six of them are “gravely” ill. A child is coincidentally injured while searching the steel piles. Do I give her the day off? I actually find myself having the thought that doing so would encourage others to get themselves hurt, before snapping out of it and letting the child rest… but decide not to enact “let children work all jobs.” 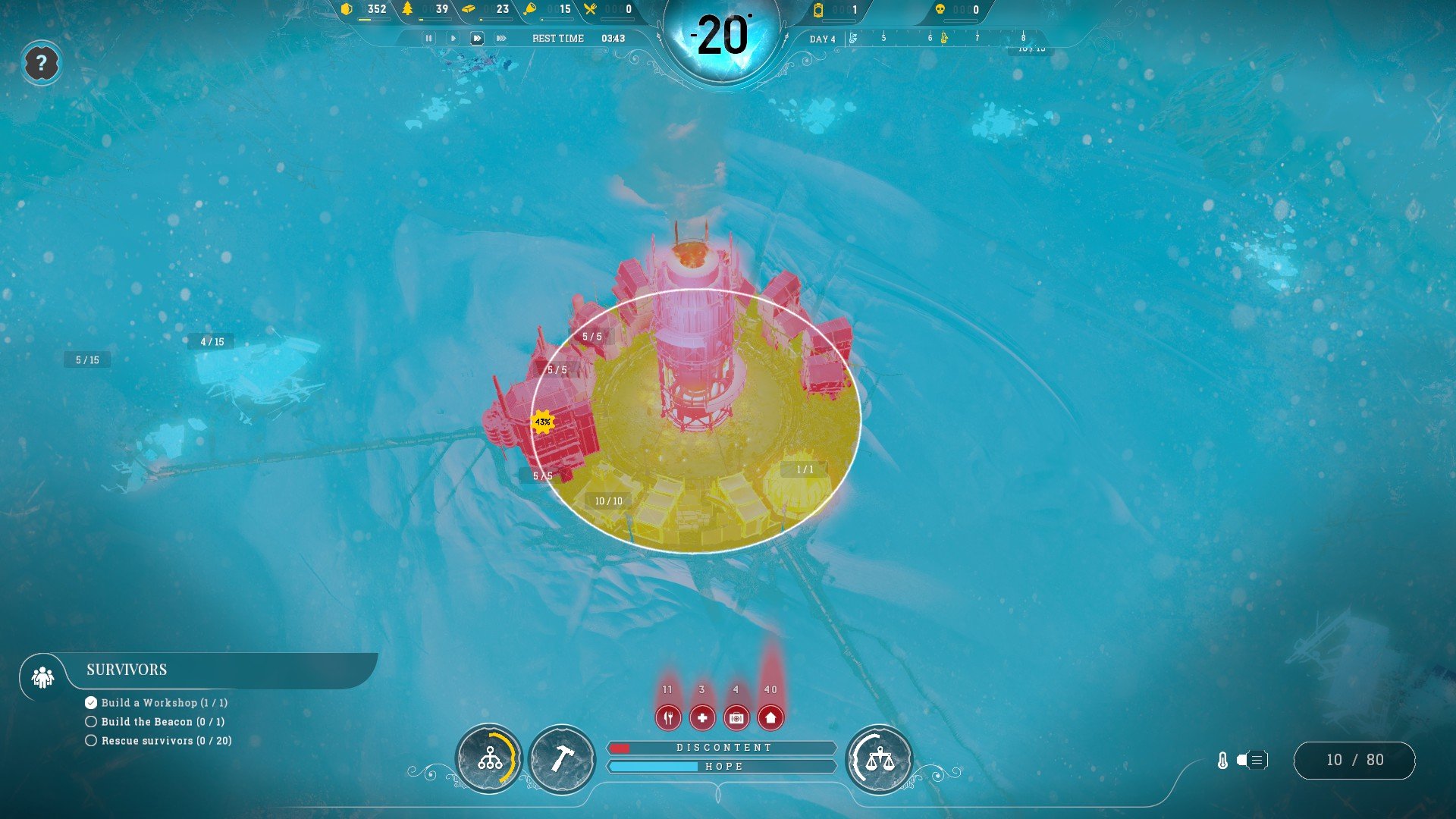 Things continued from there for several days, as supplies dwindled, I spared my people the pain of gathering in the cold, moving them into sawmills and ore-drilling stations. Later than intended, I created the Beacon, a hot air balloon that lets me send scouts into the outside world. This appears to be where the build of Frostpunk‘s story will lie. Each day my scouts could reach a new location, and then either spend a day bringing what they find back, or moving on to the next discovery. There are a few signs of abandoned civilization, but my scout never managed to reach them in time.

Finding refugees was a blessing, but I had been miraculously lucky with deaths so far; only three, and all from starvation. My medical stations are over-capacity. A crying woman asks me to stop throwing the dead in the pit, but I decline. More importantly, angry mobs form and demand to be fed. I’ve already built a hothouse (basically a greenhouse), and made the decision to use the deceased as fertilizer, but there’s no time. It’s not enough. 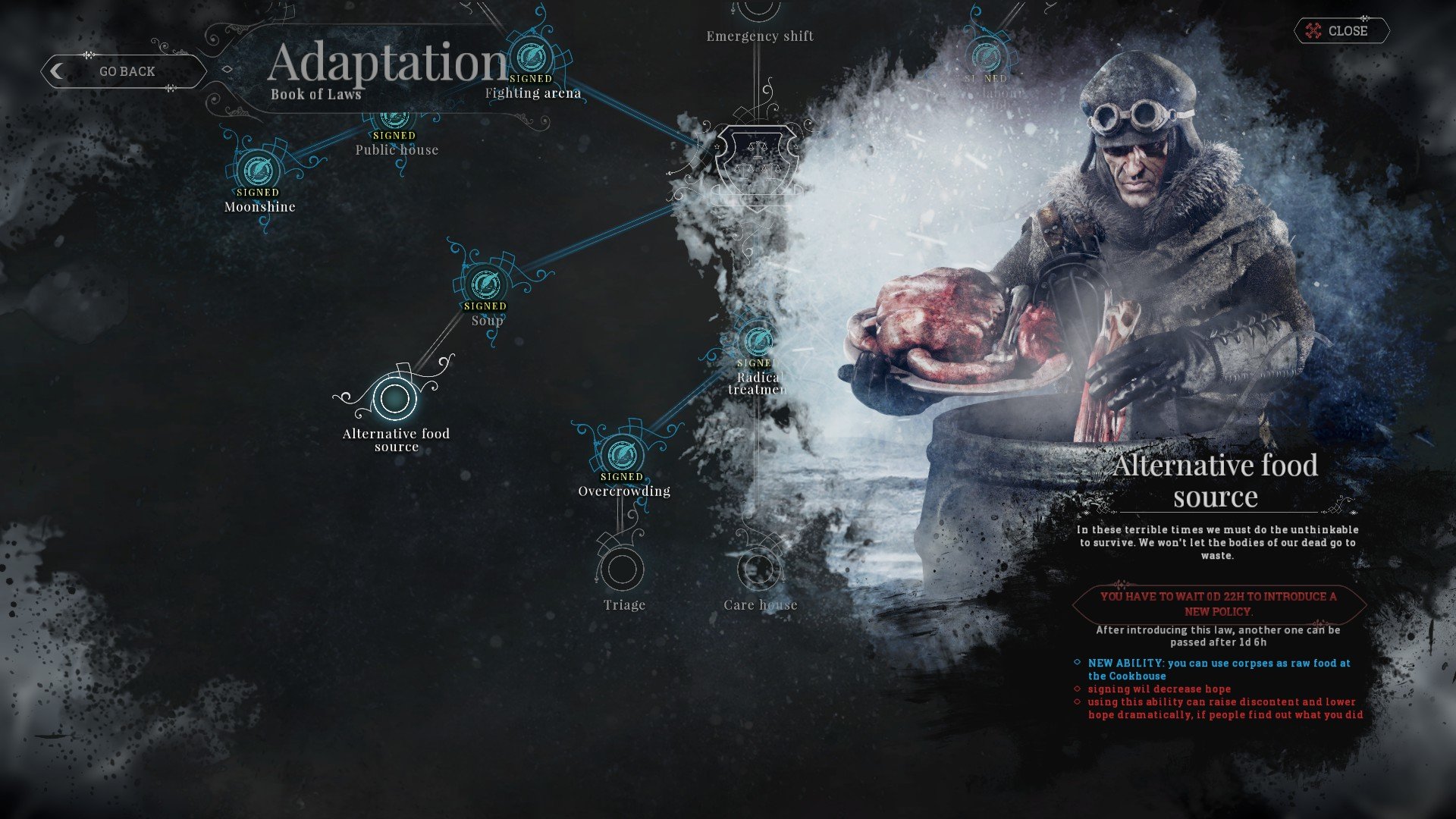 That night, the demo ends. By all accounts, no one had actually been eaten, but they were going to damn-well start. When I started playing Frostpunk, I had joked about enabling cannibalism from the start, but I couldn’t do it until forced by my situation. Yet I gladly – if not happily – sent children to work immediately in potentially dangerous situations, let people duel to the death (they never did actually kill each other), and potentially mutilate the gravely ill.

With gorgeous, stark visuals emphasizing just how tenuous your grasps on life is, and the ability to never question your morality, but always make you question your own, Frostpunk will be one to keep watching – just like I watch that coal meter deplete.