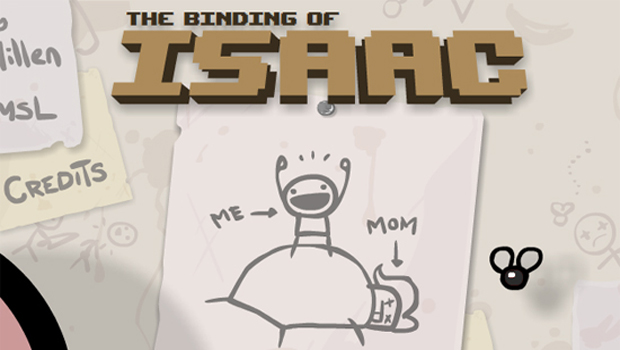 [Update: According to this interview with IGN, the game is influenced by the original Legend of Zelda, Satanism scares of the 1980s, and a passage from the bible about Abraham nearly sacrificing his son in order to show his dedication to God. You play as a “kid whose mum wants to kill him, and he escapes into the basement to get away from her and eventually – maybe – conquer her.” Awesome.]

Almost immediately after completing Super Meat Boy, Tommy Refenes and Edmund McMillen (otherwise known as Team Meat, the two man development team behind the game) were begot with questions about what their next project would be. We’re going to have to wait a little bit longer before we find out what Team Meat is up to, but for now, we can set our sets on Edmund’s next non-Team Meat project — The Binding of Isaac.

Not much is known about the game now, other than the fact that it’s a roguelike, that it’s based off of one of Edmund’s favorite games of all time, that Danny B (the award winning composer of Canabalt and Super Meat Boy) will be handling the soundtrack (sample found here), and that the programming will be handled by Florian Himsl (programmer of Coil, Triachnid and the C word).

Other dribbling factoids include word that the game won’t be on the 3DS or the 360, and that it will be “much smaller than Super Meat Boy.” Then there’s the only known images related to the game, both found in the gallery of this post. One depicts a triumphant “me” and a dead-looking mom, the other focuses on a very sad, very vulnerable looking baby. After a bit of research on the game, I found that there is an old folk song about the maltreatment of an African American World War 2 veteran called The Blinding of Issac, made famous by Woody Guthrie.

What do dead-looking moms, sad babies, and blind African American World War 2 veterans all have in common? Hopefully we’ll find out this weekend, when Edmund has promised to give me some more info on the game.