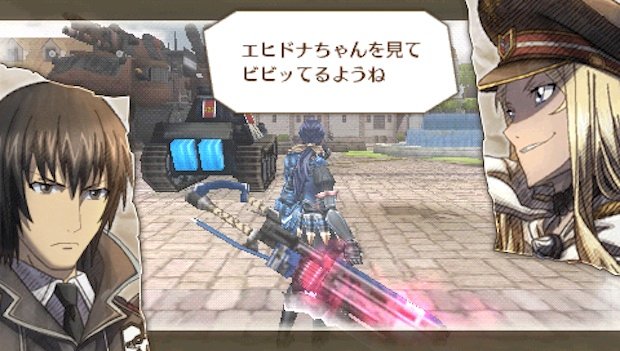 Valkyria Chronicles 2 was incredibly satisfying for this huge fan of the first title, which was a PS3 release. Some wrote off the sequel as it was a PSP-only game, but that didn’t stop Sega from bringing the next game in the series back to Sony’s portable. I gave the third game in the series a spin here at the 2010 Tokyo Game Show today, and I couldn’t be happier with what I saw.

It’s like the second game, only better. Thanks, Sega. This is exactly what I was hoping for.

Valkyria Chronicles 3, or as they call it in Japan, Senjou no Valkyria 3, focuses on a Gallian squad called “The Nameless,” and is set in 1935, which lines up with the timeframe of the first title. It seems that this troop is made up of the worst the Gallian army has to offer. The demo didn’t delve too far into the new story specifics, but it seems that the series is making its way back around to a bit of a more serious tone, much like the first game. Sega does promise a bit of fan service when it’s all said and done, as you’ll fight together with squad members from previous games.

Those that played either of the first two games will feel right at home here, as Sega didn’t mess with the strategy role-playing formula. VC3 still uses the BLiTZ battle system, and the controls and button layout are exactly the same as the Valkyria Chronicles 2. That’s not to say that they didn’t make a few improvements, though. I noticed some slightly improved menu and interface art in battles. There are also more bold, artistic character portraits, and I noticed that the story elements that unfold on the battlefield feature better headshots and even some comic-style word bubbles. These and other changes, like a in-tank aim view, weren’t large additions, but it made an already nice looking game look a tad bit better.

The demo dropped me into a battle with a sightly underpowered crew. We were up against a massive enemy weapon that had two large guns mounted to the side, which was defended by several enemy troop members. I was armed only with a tank and four party members, and it felt like the difficulty level was set to “unforgiving.” I had a ranger die on my second command, and another died one turn later. I continued to fall under heavy fire while trying to figure out the best way to take on the armed vehicle. I found out a bit too late that my tank was the best way to take their guns out. I failed my mission, which brought me back to one of the aspects I loved about the first two games: the solid difficulty level. There’s nothing worse than a too-easy SRPG.

I’d be game for any type of new Valkyria Chronicles, but Sega is dishing up exactly what I wanted in a sequel. Unlike others, I’m very pleased that the next game in the series is also portable. I also am very excited by the game’s return to a darker tone and a more serious story. And while the art was always great, I feel like they’ve outdone themselves with this third game. The character designs are very nice so far, and I know I’ve only seen a small fraction of what’s sure to be another huge cast.

I’m just going to assume that Sega is smart enough to bring this to the west. For now, Japan will see launch of this game on January 27, 2011.