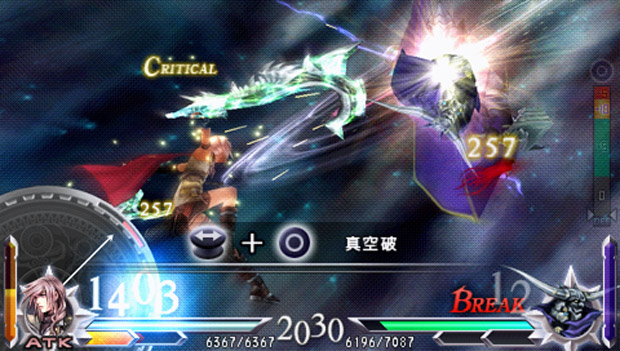 I’ll admit right away that this isn’t going to be much of a preview. Think of it as more of a quick update.

Dissidia 012 Doudecim is just more of a good thing. It’s more Dissidia, and it brings with it more characters, more fanservice, and some game play tweaks. It’s another fighting-style Final Fantasy fan love letter for the PSP.

We poked around with the TGS floor demo as Lightning, the lead character in Final Fantasy XIII. She looked great on the PSP screen, and her moves were as flashy and pretty as you’d expect. Some of her moves (and their animations) were right out of the PS3 game, and looked quite nice on the PSP’s screen. I didn’t quite know what I was doing in my short demo time as far as moves go, but I could already tell that Lighting was a great character to fight with.

What’s new in this strangely named version is that you can draw in a helper mid-battle. This is surely borrowed from other fighting games out there, but it’s a welcome addition, and a big help when things are going south for your character.

Kain was also playable on the floor, but I didn’t get a chance to try him. I’m going to do my best to hit the floor early to give this another spin tomorrow, but it’s looking like this is just more of a good thing for Dissidia fans. Right now we have no word on a western release date, but the Japanese version will be released sometime next year.