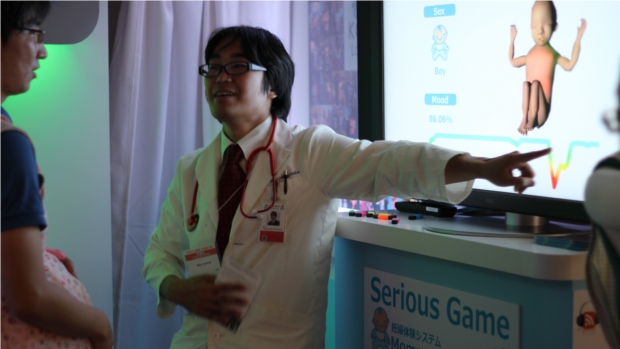 Maybe I’ve just been desensitized from years of nsfw Google searches and the increasing lunacy on display in Western media, but I haven’t experienced the culture shock so many speak about when visiting Japan. Walking the show floor of TGS is like walking any other show floor, except all the models are Japanese posing as anime characters I’ve never heard about.

It wasn’t until I stumbled upon the Serious Game: Mommy Tummy booth that I thought, “What in the hell is going on here!?!” Crammed into a small corner of the student games section (kind of like the PAX 10 of TGS — more on this later) is a game (I think, that’s what it is) with five men in lab-coats and a pregnant man surrounding it.

Since I don’t know Japanese very well, it was very hard to make sense of any of it. Not that I’m sure it would have helped. A 3D baby rotated on screen, as the other men looked on and shook their heads. Whatever the screen was showing, it didn’t look all that scientific. Neither did the terrible Super Smash Bros.-esque multiplayer game beside the 3D baby.

It was as if someone smashed Katamari Damacy into pixie dust, sprinkled it on a turd and then called it a game. With no sound, gravity and graphics that would make the worst 3D releases of 1996 blush, it certainly wasn’t going to win any awards at the show.

So, I’m giving it some pity points and giving it the Destructoid “WTF, Japan!?!”-award. Those gross, yet delicious mini-pancakes sandwiches filled with butter and syrup at convenient stores are a close runner-up.