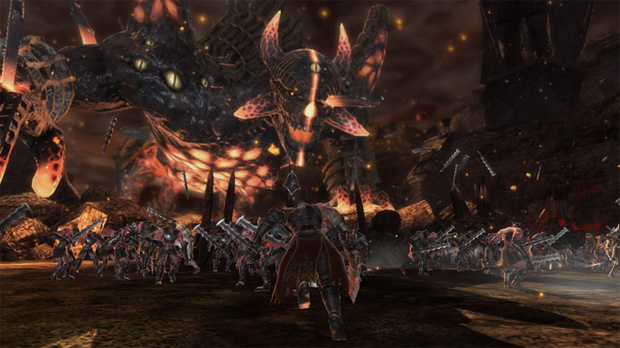 I’ll be quite honest with you — before I played it today, I have never paid much attention to Konami’s Ninety Nine Nights II even though I was generally aware of its existence. After all, our own dear Jim Sterling refers to the series as “the poor man’s Dynasty Warriors”. Not sure what I should think about that type of description!

I did not play the first game for a reason: at a glance it looked pretty much like a generically pretty action RPG, and while those can be solid sometimes, it’s not really what I’m looking for personally. At any rate, I went into the gameplay experience at TGS with an open mind, hoping to be impressed.

The demo allowed me several options, including field play, a boss fight, and a second really EPIC boss fight, I jumped into the regular boss fight first, but found myself quickly killed by a female-like beast who attacked me with gigantic tentacles that burst through the ground. I laughed a little bit at myself — perhaps I should consider learning the controls before plowing through a boss like that!

I chose field play next, and this gave me a much better feel for the general gameplay. Your character has some satisfying basic attacks, but the real fun comes from four special attacks you can execute by holding down your right should button and pressing either A. B, X or Y.  For instance, one of these attacks allows you to leap into the air and swirl your sword in a circle around you, creating a tremendous whirlwind with crazy range that kills everything near you (and some things not so near you as well!)

Mostly, I fought seemingly endless dense hordes of enemies which were occasionally punctuated by larger armored dudes out to kill me. The game’s action was fun, but personally  I found it generic.